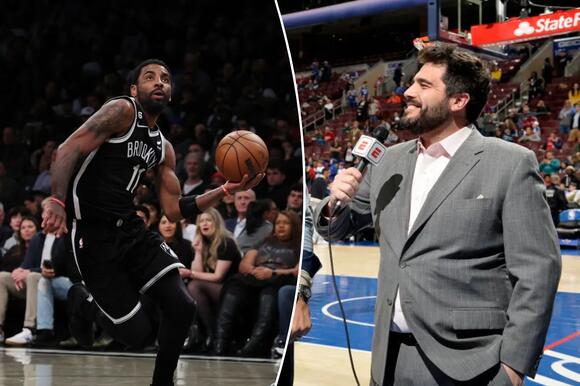 Kyrie Irving made an ESPN reporter work to get a good answer.

Irving had a fractious back-and-forth with Nick Friedell when the Nets star promoted a film laced with antisemitic tropes on social media.

Wednesday night, after the Nets defeated the Wizards 113-107, Friedell asked Irving a question about how great Kevin Durant has been playing and received little in the way of elaboration.

“Do you remember a stretch where Kevin’s been this efficient?” Friedell asked, after Durant has shot 44-of-64 from the field over the past three games.

Trying to tease out further comment, Friedell asked, “When was it?”

Friedell knew he was in a cat-and-mouse game and laughed it off as Irving smiled.

Eventually, Irving relented. “I mean, maybe not the efficient number, but we’ve seen Kevin go on a 30-point barrage when he won MVP, right?” he asked. “I don’t know how many games he went 30 in a row, but hopefully he keeps it up.”

The Nets have won three in a row and six of their last eight, appearing to steady the ship after a rocky start to the season.

Irving missed eight games as he was suspended by the team for promoting the film “ Hebrews to Negroes ,” and for his initial stubbornness in avoiding apology before ultimately issuing one.

Part of that initial stubbornness was in an exchange with Friedell, who asked Irving about promoting the film and book of the same name, to which the Nets point guard asked him, “Can you please stop calling it a promotion? What am I promoting?”

After more back-and-forth, Irving said, “Don’t dehumanize me up here. I’m another human being. I can post whatever I want so say that, shut and down, and move on to the next question … Make another Instagram clip so you can be famous again. Next question.”

Eventually Irving did offer a full apology on Instagram .

“To all Jewish families and Communities that are hurt and affected from my post, I am deeply sorry to have caused you pain, and I apologize. I initially reacted out of emotion to being unjustly labeled Anti-Semitic, instead of focusing on the healing process of my Jewish Brothers and Sisters that were hurt from the hateful remarks made in the Documentary,” the apology read, in part.

“I want to clarify any confusion on where I stand fighting against anti-[Semitism] by apologizing for posting the documentary without context and a factual explanation outlining the specific beliefs in the Documentary I agreed with and disagreed with,” the apology read in part. “I had no intentions to disrespect any Jewish cultural history regarding the Holocaust or perpetuate any hate. I am learning from this unfortunate event and hope we can find understanding between us all. I am no different than any other human being. I am a seeker of truth and knowledge, and I know who I Am.”

Julius Randle was selected to represent the Knicks at the upcoming NBA All-Star Game, but Jalen Brunson was not. Randle will make his second All-Star appearance in three years after being named one of seven reserves out of the Eastern Conference for the midseason showcase event on Feb. 19 in Salt Lake City. Brunson, who sat out Thursday’s game against the Heat with a non-COVID illness, still is looking for his first All-Star nod despite averaging a career-best 22.8 points and 6.2 assists in 49 games in the first year of a four-year, $104 million contract he signed via free agency last...
NEW YORK CITY, NY・2 HOURS AGO
New York Post

The starts aren’t getting better. The Knicks have faced a significant first-quarter deficit in seven of their past eight games, including going down by double figures in five of them. Clearly, the starting five without Mitchell Robinson isn’t working, but there is a simple solution for coach Tom Thibodeau. Start one of your better players. Start the guy who is having the best season of his career, who is without a doubt one of your most effective two-way players, who is second on your roster in assist-to-turnover ratio, has the second-best net rating and the second-best defensive rating on the team. Start Immanuel Quickley. The...
NEW YORK CITY, NY・14 HOURS AGO
New York Post

Julius Randle played an early starring role and RJ Barrett did his thing with his second-half minutes restored as they combined to lead the Knicks to a pivotal win over a playoff-race opponent on Thursday night.  After Randle was named an All-Star reserve for the second time in three seasons, he scored 19 of his 23 points in the first two quarters. Barrett emerged from his benching earlier in the week to score 20 of his 30 points after halftime. And the Knicks closed out a key 106-104 victory over the Heat at the Garden.  Quentin Grimes added 17 points as the...
NEW YORK CITY, NY・28 MINUTES AGO
New York Post

Snoop Dogg has maybe never been more relatable than on Tuesday night. Following an overtime win for the Los Angeles Lakers over the New York Knicks, the rap and pop culture icon posted to Instagram, blaming the team’s performance for sparking his high blood pressure and nerves. see also LeBron James snags triple-double as Knicks fall to Lakers in OT It was the Lakers’ second forced OT game in less than a week — the previous ending in a loss to No. 1 in the East, the Boston Celtics 125-121. This game landed in their favor 129-123, breaking a two-game losing streak and LeBron...
LOS ANGELES, CA・3 HOURS AGO
OnlyHomers

Just days before the 2023 Super Bowl, one of the star players that is set to take the field for the game has been arrested on absolutely shocking charges. Offensive Lineman Josh Sills, who is in his rookie season for the Philadelphia Eagles, will be in court on February 16 in relation to claims that are so shocking and vile that we recommend you read for yourself here.
PHILADELPHIA, PA・1 DAY AGO
New York Post

Rachol West-Chachere, the wife of Eagles safety Andre Chachere, is responding to troubling game-day allegations made by Sydney Warner, the spouse of 49ers outside linebacker Fred Warner, following Sunday’s NFC Championship game in Philadelphia. In a video shared this week on TikTok, Sydney stated how she’ll “probably never go back” to Lincoln Financial Field due to the alleged behavior of Eagles fans, claiming one got in her face at the concession stand and that she “didn’t feel very safe.” As Syndey’s comments began to circulate online, Rachol replied to a post Wednesday on Twitter with one word. “Soft,” wrote Rachol, who married...
PHILADELPHIA, PA・8 HOURS AGO
New York Post

What’s better than a superteam? A super-duper team? A day after the Liberty landed superstar free agent Breanna Stewart to instantly vault into the WNBA elite, they pulled off another coup by landing four-time All-Star point guard Courtney Vandersloot. The Liberty can now roll out a starting lineup with an All-Star at every position: Stewart, Vandersloot, franchise guard Sabrina Ionescu, former MVP center Jonquel Jones (who arrived in a trade in mid-January) and wing Betnijah Laney. ESPN reported Stewart will take “substantially less” than her maximum contract to help fit Vandersloot under the WNBA’s hard salary cap. Laney may yet be moved...
OREGON STATE・5 HOURS AGO
New York Post

During last offseason, CBS Sports executives recognized that some of the luster of Tony Romo’s NFL analysis had faded. As a result, they staged something of an intervention, The Post has learned.  In an effort to have Romo focus more on being fully prepared and to help him find a way to mesh better with his broadcast partner, Jim Nantz, executives, including CBS Sports chairman Sean McManus and CBS’ lead NFL game producer, Jim Rikhoff, flew on separate trips to Romo’s Dallas home, according to sources.  “To call this an intervention is a complete mischaracterization, we meet regularly with our on-air talent,”...
3 HOURS AGO
New York Post

What happened? Why does football no longer resemble football? Who did this to it? Why?  We’ve all been told, “It’s straight ahead. You can’t miss it.” Then missed it. Thus it seems that the larger the game, the greater the farce, the residue of the fanciful modern wish to make the human condition flawless.  The weekend’s AFC and NFC championships were an institutionalized mess. Seven hours of sustained, foresight-starved lunacies that have proliferated during the reign of Roger Goodell, now in the social activism business as long as you cut the NFL in on your gambling losses.  The ex-NFL refs now employed by...
ALABAMA STATE・1 HOUR AGO
New York Post

Phil Mickelson takes shot at Twitter critic for being bald

Phil Mickelson has been on a Twitter tear recently, and it doesn’t if the target of his commentary has dozens or thousands of followers. One of his latest recipients was an account with 44 followers, who called Mickelson an “ass” and said that he hoped Lefty gets “booed off the playing grounds. Boos are free!” “I see your sense of humor lived in your hair,” Mickelson tweeted in a reply, referencing the bald man’s profile picture. Mickelson engaged with a dozen other posts Thursday that had responded to his tweet — a reply to former NFL running back Danny Woodhead’s support proposing a...
5 HOURS AGO