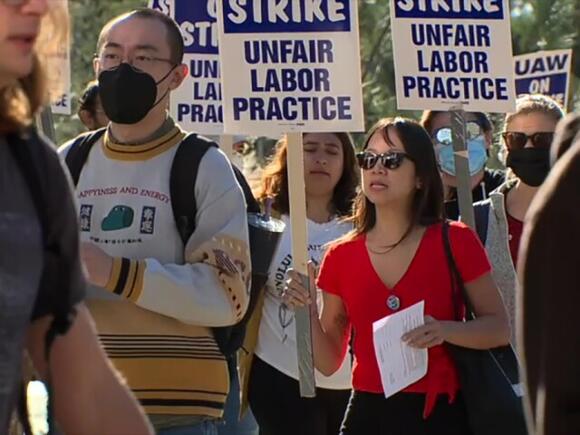 SAN DIEGO (KGTV) — New developments for some UC scholars and researchers after weeks of striking, they’ve now reached a tentative deal with the university system.

While there was good news for some, others haven't reached an agreement, continuing their strike, even fundraising to make ends meet in the meantime.

The deal includes things like pay increases, paid family leave, and childcare reimbursement, but those that reached a tentative deal earlier this week, won't be heading back to work yet, in support of the others still on strike.

Gardiner, a visual arts major, created a Go Fund Me page to help students struggling during the strike, going with only a percentage of their pay.

The fundraising page isn't affiliated with the union but Gardiner says they had no choice but to ask for help.

In a statement, the UC system said in part, they believe their offers are fair, reasonable, and responsive to the union's concerns.

Contract negotiations for other groups like t.a.s and graduate students are still ongoing and students tell me they hope the school will meet their requests.

The only lung cancer walk in the state happened this morning at Liberty Station. It was organized by the American Lung Association. Every person walked for a reason.
SAN DIEGO, CA・8 HOURS AGO
ABC 10 News KGTV

An ER technician with a passion for art dedicated a hallway in Sharp Chula Vista's triage department to first responders with a display of their portraits.
CHULA VISTA, CA・2 DAYS AGO
ABC 10 News KGTV

It's been a traumatic week for the Asian-American Pacific Islander community, but the recent mass shootings that have rocked our country aren't stopping many AAPI communities from celebrating.
SAN DIEGO, CA・1 DAY AGO
ABC 10 News KGTV

On Sunday, a handful of Asian American and Pacific Islanders gathered in City Heights to address mental health. They discussed the increase in violence towards their community since the pandemic.
SAN DIEGO, CA・13 MINUTES AGO
ABC 10 News KGTV

Among the mental and emotional coping tools for kids: Karate

With the increase in violence the U.S. has seen over the last few years, parents and students are feeling more anxious than ever.
SAN DIEGO, CA・4 DAYS AGO
ABC 10 News KGTV

The Bistro, located off of National Avenue, opened at the beginning of the month. It is completely operated by students with the California Culinary Arts Institute
SAN DIEGO, CA・2 DAYS AGO
ABC 10 News KGTV

Anger over the disturbing beating and the death of Tyre Nichols has sparked peaceful protests across the country, including in San Diego.
SAN DIEGO, CA・1 DAY AGO
ABC 10 News KGTV

Families with loved ones who have died while in custody gathered outside the Sheriff's Department Headquarters in Kearny Mesa on Wednesday asking for reform and answers.
SAN DIEGO COUNTY, CA・4 DAYS AGO
ABC 10 News KGTV

A skydiver suffered a traumatic injury after his parachute failed to completely open and he struck the roof of a home and landed on the ground, the Oceanside Fire Department said Saturday.
OCEANSIDE, CA・1 DAY AGO
ABC 10 News KGTV

A Chula Vista man who blew up two ATMs in an attempt to steal the money inside was sentenced Friday to more than 11 years in federal prison.
CHULA VISTA, CA・2 DAYS AGO
ABC 10 News KGTV

The Farmer’s Insurance Open ended today. People came from all over to watch the pros perform, bringing a large economic impact to the city.
SAN DIEGO, CA・1 DAY AGO
ABC 10 News KGTV

You might notice more lights on the corner of Newport and Cable in Ocean Beach. It's a security measure that was funded by donors hoping to make the coastal community a safer place.
SAN DIEGO, CA・3 DAYS AGO
ABC 10 News KGTV

Ukrainian artists will have their work on display in San Diego starting Friday. The art exhibit comes as the one-year anniversary of Russia’s invasion approaches.
SAN DIEGO, CA・2 DAYS AGO