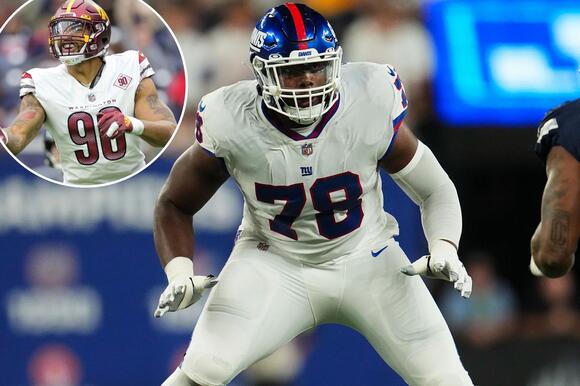 Take the sense of optimism that grew out of the Giants bookending their offensive line with two first-round draft picks and double it.

That’s how the Washington Commanders built their defensive line from 2017-20. So, while the Giants have a young foundation in place with left tackle Andrew Thomas and right tackle Evan Neal, the Commanders counter with four former first-rounders: Ends Chase Young and Montez Sweat and tackles Daron Payne and Jonathan Allen.

The cliché that games are won along the line of scrimmage certainly will apply to Sunday’s NFC East clash, which might as well be a six-face advertisement for the big boys developed in the SEC and Big Ten. What makes Washington’s front four such a challenge?

“They’re good at the run and the pass, that’s what,” head coach Brian Daboll said. “Having strong fronts — both defensive and offensive — is where you want to build your football team, and they certainly have done it. They don’t give up a lot of points.”

Sweat, Payne and Allen all have at least 6.5 sacks and combine for 20 — matching the Giants’ team-wide total. Payne (85.6) and Allen (83) are among the leaders in snaps played percentage among NFL interior defensive linemen and the main reason that the Commanders’ last six opponents are rushing for just 85.1 yards per game. The last seven opponents — during a season-changing 6-1 stretch — are averaging just 177.7 pass yards and 15 points per game.

“Allen gets — not necessarily lost in the hype of all the others — but I think he’s the best player,” center Jon Feliciano said. “Biggest thing is we can’t beat ourselves.”

What’s worse news for Daniel Jones and Saquon Barkley ? Young — the 2020 NFL Defensive Rookie of the Year — could play in his first game since Nov. 14, 2021, which won’t make it any easier to jump-start a Giants’ rushing attack that tumbled from No. 3 to No. 6 after managing just 89.5 yards per game in back-to-back losses.

“Their front seven is very disruptive,” Thomas said, adding the three linebackers to the mix. “Talent all over the place. Not just that, they play physical, they run to the ball. So, we have to be prepared for that, be able to get movement at the line of scrimmage and protect D.J. to allow him to make plays.”

Jones had the best game of his career — 352 passing yards, five touchdowns and no interceptions — in a 41-35 victory against Washington on Dec. 22, 2019. If the outcome of that game was reversed, the Giants likely would’ve picked No. 2 instead of No. 4 in the draft and selected Young instead of Thomas .

Young looked like the better player heading into his first three head-to-head matchups with Thomas. The narrative has flipped with Young’s long recovery from a torn ACL and Thomas’ rise to No. 3-ranked offensive tackle by Pro Football Focus. Sweat and Thomas switch sides from play to play more than most end pairings.

“Any dominant pass rusher in this league I get excited for,” Thomas said, “and that’s the beauty of playing left tackle: Every week there’s going to be somebody that’s a war daddy that you’ve got to be prepared for. So, I don’t look at [Young] any different than the other top rushers in the league.”

Sweat was the consensus top edge rusher on the board when the Giants made their second first-round selection in 2019. After taking Jones instead of Jaguars-bound edge Josh Allen at No. 6, the Giants passed over Sweat (who was potentially misdiagnosed with a heart condition pre-draft ) for defensive tackle Dexter Lawrence. That decision also now is seen through a new lens than years past, given Lawrence’s development into more than run-stuffer.

Young isn’t the only starter about to return to the trenches. The Giants’ offensive line could be whole with the returns of Neal (four games missed) and Feliciano (one). Nick Gates, who started at center last week, could be the fifth different starting left guard in 12 games.

“Gates and I will feed off each other because we both have the same mindset of crazy,” Feliciano said. “It’s easy to jell with a guy who you know understands what you are thinking.”

Maybe the push on the line of scrimmage won’t just come down to those six former first-round picks after all.

“All hands on deck,” Daboll said.

Death is never something we like to talk about but recently the NFL lost someone at a very young age. Denver Broncos Super Bowl winning running back Ronnie Hillman has died at the age of only 31. Hillman had been battling a rare form of cancer called renal medullary carcinoma...
DENVER, CO・10 HOURS AGO
The Comeback

Last week, legendary quarterback Tom Brady officially announced his retirement from the NFL last week, prompting all sorts of tributes from several people all across the league with some sharing stories about his life on and off the field. It’s also led to some speculation as to why exactly Brady is retiring, and Brady’s father has the answer. In an Read more... The post Tom Brady revealed real reason for retirement appeared first on The Comeback: Today’s Top Sports Stories & Reactions.
13 HOURS AGO
ClutchPoints

The Denver Broncos managed to land Sean Payton as their new head coach after the Nathaniel Hackett experiment blew up in their faces, and it’s clear Payton is going to have a lot of work to do if he wants to turn things around in Denver. The first problem he will have to deal with, which also happens to be the biggest, involves the team’s starting quarterback, Russell Wilson.
DENVER, CO・12 HOURS AGO
New York Post

Thirty-five years ago Doug Williams became the first black quarterback to start in — and win — the Super Bowl. This year’s game marks the first time two black QBs will start in the NFL’s biggest game. It’s a moment Williams, 67, compared to another important first: Barack Obama being elected President. “I had tears of joy in my eye because I had an opportunity to witness this,” the former Washington QB told TMZ Sports of the Chiefs’ Patrick Mahomes and Eagles’ Jalen Hurts reaching Super Bowl 2023 in what will be Mahomes’ third trip and Hurts’ first. “Sit there, and just...
2 DAYS AGO
New York Post

PHOENIX — Patrick Mahomes is still just 27, and whether he wins his second Super Bowl championship or not, no one should dispute that he is the heir apparent to the Tom Brady throne. The man who believes he holds the key to Mahomes finding a way to beat...
KANSAS CITY, MO・8 HOURS AGO
New York Post

PHOENIX — Dictionary.com defines “slay” as a verb meaning “to destroy,” or alternately, “to strongly impress or overwhelm someone.” Eagles cornerback Darius Slay did one on opening night for Super Bowl 2023 and plans to do the other to the Chiefs receivers come game day. “I slay at video games, I slay in basketball, I slay at everything I do,” Slay quipped, treating it as a given that he slays on the football field. The biggest victim of the Eagles cornerback’s honesty Monday at the Footprint Center was Matt Patricia, his former Lions head coach who just was replaced as Patriots offensive coordinator...
3 HOURS AGO
New York Post

SNY’s Ian Begley on Kyrie Irving being dealt to Dallas, Nets’ next steps

SNY’s NBA insider Ian Begley joins Brandon London to break down Kyrie Irving being traded to the Mavericks, which other teams were in contention for the All-Star point guard’s services and what Brooklyn may do in the aftermath.
BROOKLYN, NY・11 HOURS AGO
New York Post

Jacob Trouba was at it again – delivering huge hits and winning fights. The Rangers captain laid a massive, helmet-launching hit on the Flames’ Nazem Kadri during the second period of New York’s 5-4 overtime win at Madison Square Garden on Monday night. With the Calgary center on the ice near the Rangers’ net, his teammate Dillon Dube attempted to make Trouba pay for the hit, sparking a fight. It didn’t prove to be the best decision for Dube. After an early – and short – stalemate, Trouba tossed four or five punches and wrestled Dube to the ground with the score knotted at two. The 28-year-old Trouba has become of the NHL’s more notorious hitters on the ice. The one he delivered to the Blackhawks’ Jujhar Khaira last season led to the forward being stretchered off the ice before landing in the hospital. Trouba reached out via text after the hit – which some believed as borderline dirty — happened and the two put it behind them during training camp this season. Trouba also clobbered Blackhawks center Andreas Athanasiou in December during a 5-2 loss.
NEW YORK CITY, NY・4 HOURS AGO
New York Post

PHOENIX — There are many things Miles Sanders knows about his buddy, Saquon Barkley, but Sanders does not know this:  “I don’t know how he feels about me making it to the Super Bowl before him,’’ Sanders said Monday night, flashing a smile. “I definitely got some bragging rights.’’  Yeah, he’s got some bragging rights. The mentee got here before the mentor.  Sanders was always a step or two behind Barkley when they were teammates at Penn State but look who is still playing and who is again watching. Sanders is the leading rusher for the Eagles, who easily ran over their NFC...
5 HOURS AGO
New York Post

ORLANDO, Fla. — The Knicks were without Jalen Brunson against the Heat last week and missing RJ Barrett against the 76ers on Sunday night, yet won both of those games against quality teams.  In fact, the Knicks’ four wins over the past two weeks have come against four of the current top-six seeds in the Eastern Conference standings: the Cavaliers (fifth), Celtics (first), Heat (sixth) and Sixers (third).  They can pull even with Miami in the standings with a win Tuesday over the improving Magic, who have won six of their last 10 behind Rookie of the Year candidate Paulo Banchero (20.3...
NEW YORK CITY, NY・6 HOURS AGO
New York Post

It takes some real prognostication chops to accurately predict the Super Bowl MVP, which has gone to a player on the winning side all but one time in the 56-year history of the Super Bowl. It takes a little luck, too. What was once a quarterbacks’ award has shifted in recent years, with wide receivers and even two linebackers taking home the honors over the last decade. With so much talent on the field between the Eagles and Chiefs, who can we expect to emerge as this year’s Super Bowl MVP? Brief history of Super Bowl MVP To get a better sense of...
2 DAYS AGO
New York Post

Khalil Lee’s stay in the Mets organization likely concluded Monday, only days after he was accused of assaulting a former girlfriend. The outfielder was designated for assignment by the Mets, who claimed right-handed pitcher Sam Coonrod off waivers from the Phillies to take Lee’s spot on the 40-man roster. Lee’s roster spot with the Mets was tenuous even before allegations last week that he physically and verbally abused Kerywin Hill, a former girlfriend, in May of last year. Syracuse police issued a warrant for Lee, 24, on the charge of criminal obstruction of breath. A lawsuit filed against him by Hill alleged...
5 HOURS AGO