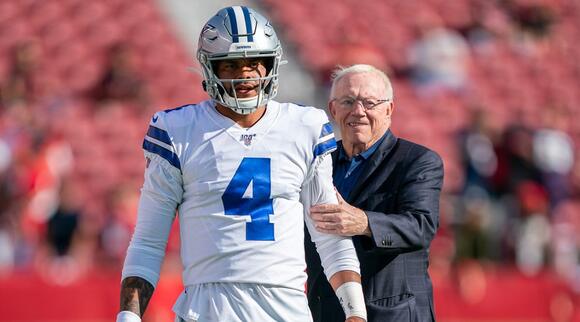 The Cowboys quarterback addressed James’s thoughts on the recently surfaced photo of the Dallas owner at a 1957 desegregation protest.

Since the picture of Cowboys owner Jerry Jones standing in a 1957 Arkansas desegregation protest surfaced ahead of Dallas’s game against the Giants on Thanksgiving, it has sparked conversation about Jones and his past.

Jones, an Arkansas native, was 14 years old when he was spotted in a photo that was taken on Sept. 9, 1957, at North Little Rock High that featured a group of white students blocking the door and yelling racial slurs at six Black students as they attempted to enter. While Jones said he had no intention of badgering any of the Black students and was attending the event out of curiosity, two high-profile athletes have weighed in on the resurfacing of the photo.

Following the Lakers’ 128–109 win against the Trail Blazers on Wednesday, LeBron James questioned the media about why he not been ask questions about Jones in the same manner that he was about Kyrie Irving’s sharing of antisemitic propaganda.

“When I watch Kyrie talk and he says, ‘I know who I am,’ but I want to keep the same energy when we’re talking about my people and the things that we’ve been through,” James said . “And the Jerry Jones photo is one of those moments that our people—Black people—have been through in America.

“I feel like, as a Black man, as a Black athlete, as someone with power and a platform, when we do something wrong or something that people don’t agree with, it’s on every single tabloid, every single news coverage, on the bottom ticker, it’s asked about every single day. But it seems like to me the whole Jerry Jones situation, photo—and I know it was years and years ago and we all make mistakes, I get it—but it seems like it’s just been buried under, like, ‘Oh, it happened, O.K. we just move on.’ And I’m kinda disappointed I haven’t received that question from you guys.”

On Thursday, James’s impassioned statement led to reporters asking Cowboys quarterback Dak Prescott—who biracial and his father is Black—about his thoughts on the comments made by the Lakers star. Prescott said the publishing of the photo serves as a reminder that people “can be more empathetic” as well as the “times we’ve come from to where we are now.”

“A guy who is completely biracial … it’s easy for me to speak on race on one side or the other ... I don’t know if I’ve fully processed [the photo] all the way, honestly,” Prescott said . “I think whether LeBron is talking about the picture … that’s on Jerry to address, right?

“I mean … it’s 65 years ago and how times have changed,” Prescott said. “Look at the man’s resume since then. ... As I said, give grace. I think that’s a conversation and a question not only for him but for you guys and how you feel on how accountable you’ve been in covering and discussing the disparities and differences in race.”

The two-time Pro Bowler also said his notion to provide grace stems from him “trying to make the world a better place.”

“That’s who I am at my core and all I believe in,” Prescott said. “Unfortunate things come up from the past … and they show how far we’ve come. … It wasn’t that long ago that we were all sitting in different sides and we weren’t together.

“But as I said, I wouldn’t be here if it was still that way, so I believe in grace and change.”

While the photo of Jones has stirred up dialogue, the Cowboys owner previously said in an interview with Dave Maraniss and Sally Jenkins of The Washington Post that he regretted not doing more to help the Black students feel inclusive.

so where is LeBron on the slave labor in China? he quietly collected millions of dollar's on the backs of people enslaved in China. ...oh wait he's making money so it's okay???

remember good ol jerry threatened to FIRE ANY COWBOY PLAYER if they kneeled and he's an AVID supporter of trumptraitor!THINK ABOUT THAT!

No one is asking for Jones head like they did Kyrie so stop crying and moaning. Just stand up and admit why he was there since the picture surfaced. He wasn't following the yellow brick road and ended up there. He made a conscious decision to be there.

It’s the sound of hearts breaking across Philadelphia and the state of Pennsylvania… and let’s be honest, everywhere else in the country, too. Eagles quarterback Jalen Hurts made a very rare public appearance with his girlfriend Bryonna “Bry” Burrows after the NFC Championship game this past Sunday, which is a surprise to many fans, as he is extremely private about his life outside of football.
PHILADELPHIA, PA・1 DAY AGO
Yardbarker

The Pittsburgh Steelers and Philadelphia Eagles have been in the NFL since its inception. The two teams even briefly combined forces during World War II and called themselves the Steagles. The players and coaches didn’t like it then and the two fan bases don’t like each other now. Fans from the same state rarely get along and the vitriol was on display after the Eagles made their second Super Bowl in five seasons.
PHILADELPHIA, PA・2 DAYS AGO
Sports Illustrated

Now that he’s retired, Fox has a dilemma regarding its No. 1 NFL booth.
23 HOURS AGO
Sports Illustrated

The All-Star duo went back and forth on Instagram after Saturday night’s controversial play.
LOS ANGELES, CA・2 DAYS AGO
Sports Illustrated

It wasn’t the ruling (which was correct) or the rule (which makes sense) that bothers us. No, what bothered us was the punishment the Bengals received late in Sunday’s game.
CINCINNATI, OH・2 DAYS AGO
Sports Illustrated

The greatest quarterback of all time always knew how to make the correct decision on the field. So it's no surprise that he ended his career at precisely the right moment.
MICHIGAN STATE・22 HOURS AGO
Sports Illustrated

They seem to be sick of people talking about it already.
21 HOURS AGO
Sports Illustrated

Adams was answering some fan questions and decided to be very blunt.
LAS VEGAS, NV・30 MINUTES AGO
Sports Illustrated

How NBA Referees Are Moving Forward After Missed Call on LeBron

Monty McCutchen breaks down the missed call from the Lakers-Celtics matchup and what it means going forward for referees.
BOSTON, MA・1 DAY AGO
Sports Illustrated

The former Cowboys offensive coordinator is heading to the AFC.
2 DAYS AGO
Sports Illustrated

The Best Offensive Players to Never Reach the Super Bowl

Sports Illustrated compiles the statistical leaders among players who never appeared in the NFL’s Big Game.
18 HOURS AGO