Jackson faces Wilson, but both offenses could use improving 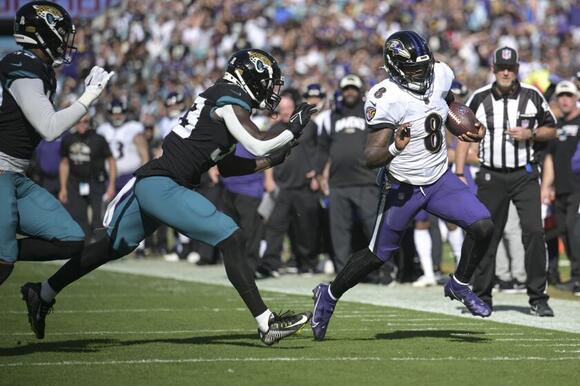 At the beginning of the season, Lamar Jackson vs. Russell Wilson looked like a marquee matchup of quarterbacks.

Now that this Ravens-Broncos clash is actually upon us, it could just as easily end up as a defensive duel.

Baltimore hosts Denver on Sunday, and although the Ravens have played well enough to share first place in the AFC North, they haven't been all that explosive on offense lately. Of course, that's nothing compared to Denver's struggles. Wilson's Broncos haven't scored more than 23 points all season, and they've managed more than 16 just twice.

“Every day and every year you play this game, you get wiser, smarter and understand there’s ebbs and flows. Any great athlete, they go through a lot of great moments but also have some tough ones,” Wilson said. “This is a moment of adversity. It’s challenging and I don’t run from it. You just keep working, you keep believing, you keep climbing."

Wilson has thrown for only eight touchdowns this season, and the Broncos (3-8) has lost seven of their last eight.

As for Jackson, he's on pace to set a career high in yards passing, but he's had to navigate injuries to deep threat Rashod Bateman and other key offensive players. Baltimore (7-4) finally hit a couple big plays in the passing game in a loss at Jacksonville last weekend, but those have been sporadic.

Where Jackson has remained elite is in the running game, where he's been remarkably consistent through his career. Jackson's combination of passing and running allows the Ravens to move the chains, and although they've had issues in the red zone, their formula was successful enough to win four straight before last weekend's defeat.

Up until a wild fourth period against the Jaguars, Baltimore had allowed only 26 points in the previous 11 quarters. Now the Ravens go against Wilson.

“He’s still got it. Yes, he’s getting older, and he might have slowed down a little bit, but he still can move,” linebacker Patrick Queen said. “You have to be on your Ps and Qs with this guy. Like I said, he has an arm, he can run a little bit still, knows our defense, knows his reads, obviously, as a quarterback, all that stuff that quarterbacks do to try to look us off."

The only time these two quarterbacks have faced each other was in 2019, during Jackson's MVP season. The Ravens beat Wilson's Seattle Seahawks 30-16. Jackson completed only nine passes but ran for 116 yards and a touchdown.

Baltimore beat Denver 23-7 last season. There was some contentiousness after that game because the Ravens decided to run a last-second play so they could tie a record for consecutive 100-yard rushing games. That infuriated Broncos coach Vic Fangio , but Denver has a new staff now and it's not clear if there will be much lingering bad blood.

Former Ravens special teams coordinator Jerry Rosburg returns to Baltimore as Broncos coach Nathaniel Hackett’s game management advisor. Rosburg, who served 11 seasons as John Harbaugh’s special teams coordinator and confidant before retiring in 2019, joined the Broncos after a series of operational miscues by Hackett, a first-time head coach, and his staff in September.

“Ever since Jerry got here, he’s definitely helped me quite a bit through so many different areas,” Hackett said. “I really appreciated him here and he brings it from that culture and that organization. It’s great to have a guy like that here.”

The Ravens have had at least three sacks in seven straight games, and veteran lineman Calais Campbell needs one more for 100 in his career.

“Are we pleased with where our pass rush is at right now? Yes, I’d say so, but you watch the last game’s tape, and there were situations where we made the quarterback hold the ball, and we didn’t get home,” defensive coordinator Mike Macdonald said. “There were situations where we won clean, and the ball was out. So, the thing that we’re trying to do is marry that together so we’re a little bit more consistent working together in that aspect.”

Nobody in the league has faced as much criticism this season as Wilson, whose injury-riddled offense is scoring just 14.2 points per game — the worst average for a team heading into December since the 2000 Cleveland Browns (10.5). Hackett said he’s impressed with how Wilson hasn’t let any of the vitriol bother him.

“It’s unbelievable — he doesn’t get affected,” Hackett said. “He keeps coming out here working. He may work harder than I thought you could. I give him so much credit for that — just keeping his head down and keep working with all the different people that he’s gone out on that field with. I just give him so much credit for that. With all the different lineups that we’ve had, he just keeps grinding, keeps trying to make a play and keeps fighting, no matter what.”

The Ravens have held their last four opponents under 50 yards rushing. That equals the longest streak in one season since the 1970 AFL-NFL merger. The other teams to do it were the 2013 Lions, 2006 Vikings, 2005 Patriots and 1993 Steelers.

Over the past few days, the betting line for the AFC title game has shifted between the Kansas City Chiefs and Cincinnati Bengals. The Chiefs opened as favorites, but the line quickly shifted in favor of the Bengals following the injury to star quarterback Patrick Mahomes. After a few practice ...
KANSAS CITY, MO・1 DAY AGO
San Diego Union-Tribune

Broncos owner Greg Penner and Michigan coach Jim Harbaugh went through with a follow-up meeting about Denver's head coaching position last week but it did not materialize in a deal, sources told ESPN.
DENVER, CO・27 MINUTES AGO
Whiskey Riff

It looks like Dak isn’t doing too bad after his playoff loss to the San Francisco 49ers NFC divisional round this past Sunday…. Dallas Cowboys quarterback Dak Prescott has a new lady in his life, Louisiana State University swimmer named Jadyn Jannasch (her Instagram profile picture features her wearing a Cowboys jacket as well):
LOUISIANA STATE・2 DAYS AGO
San Diego Union-Tribune

Damar Hamlin released a video Saturday in which he says he's thankful for the outpouring of support and vows to pay it back, marking the first time the Buffalo Bills safety has spoken publicly since he went into cardiac arrest and needed to be resuscitated on the field in Cincinnati on Jan. 2
32 MINUTES AGO
San Diego Union-Tribune

Joel Embiid won the battle of MVP candidates with 47 points and 18 rebounds as the Philadelphia 76ers extended their winning streak to seven games with a 126-119 win over Nikola Jokic and the Denver Nuggets
DENVER, CO・2 HOURS AGO