How the Vikings can win the Jefferson vs. Sauce battle 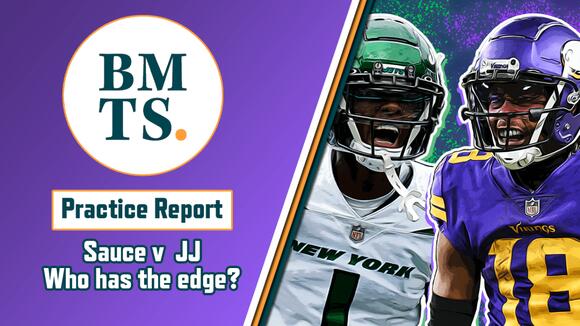 It's not as simple as Gardner shadowing Jefferson. That probably won't happen.

The best way the Vikings can win the matchup between Justin Jefferson and Sauce Gardner on Sunday is to not find out what that matchup is like.

Silly? No. As long as Gardner sticks true to form and doesn't shadow Jefferson all game, the Vikings can move their superstar receiver around to avoid Gardner.

"Sauce Gardner has shown such next-level ability, the same type of skill of all of the elite corners. He's got length, instincts, playmaking ability on the ball. But unlike Darrelle Revis of the past, he does not follow receivers," says Purple Insider's Matthew Coller. "He's not going to be a guy that comes into the slot if Jefferson is lined up there or goes side-to-side or follows in motion. He's mostly going to stay on his side of the field."

According to Pro Football Focus, Gardner has lined up outside as a wide corner on 602 snaps this season and just seven times has he slid inside to the slot. Seeing Jefferson in the slot and in motion to get away from Gardner is a good bet this week, but that doesn't totally solve the Jets' defense.

The Jets have two elite corners.

"D.J. Reed has also had a tremendous year. That's not an easy matchup, either," said Coller. "Of course, no matter who Justin Jefferson goes up against he has an advantage because he's Justin Jefferson."

Gardner is the No. 1 cover corner in the the NFL this season and Reed ranks ninth, according to PFF. The Jets also have Michael Carter II, whose coverage grade ranks 19th and overall defensive grade is tied with Reed for 12th among cornerbacks.

But the truest of all the true keys to the game isn't exploiting whoever covers Jefferson. It's Minnesota's offensive line blocking New York's elite defensive line and giving Kirk Cousins time to find Jefferson.

"If you look at the numbers for the ability to pressure the quarterback, the Dallas Cowboys are right up there. New England is also right up there, who [the Vikings] solved pretty well on Thanksgiving night. But there's the New York Jets right next to those teams among the elite at getting after the quarterback," said Coller.

"So using play-actions, using the run game to set up the pass, finding ways to get Jefferson the ball and then finding other options. T.J. Hockenson has been huge for this team. He's been one of the best tight ends in the league since coming over to Minnesota. Finding other options that aren't Justin Jefferson when the Jets are putting so much attention on him will also be important."

Related: 5 Jets players the Vikings should be worried about

The Buffalo Bills are coming off a disappointing end to their season, losing 27-10 at home against the Cincinnati Bengals in the AFC Divisional round in the playoffs. Entering the offseason, the Buffalo Bills have started looking toward the future and made the tough decision to fire one of their long-tenured coaches.
8 HOURS AGO
Page Six

Dallas Cowboys quarterback Dak Prescott and Natalie Buffett have broken up after two years of dating, Page Six can exclusively reveal. Multiple sources confirm the longtime couple actually split around March 2022 but have kept it close to the vest. We’re also told Prescott has been casually dating. Reps for the former couple didn’t immediately return Page Six’s request for comment. The athlete, 29, and Buffett, 25, began dating sometime in 2020 based on social media photos, though it’s unclear exactly when they became official. She posted their first picture together in honor of his 27th birthday, captioning the outdoorsy shot at the...
1 DAY AGO
Athlon Sports

The NFL world today is fixated on Tom Brady and Aaron Rodgers.  Questions continue to follow the future Hall-of-Famers regarding their future. Is retirement on the table? What about a change of scenery? In the case of Brady, a report emerged Tuesday indicating Brady may play in 2023... just ...
TAMPA, FL・2 DAYS AGO
Boston 25 News WFXT

FRISCO, Texas — (AP) — A shuffling of the coaching staff for the Dallas Cowboys won't include defensive coordinator Dan Quinn, who is returning after another year of receiving interest from teams seeking head coaches. Coach Mike McCarthy said the club's decision not to renew the contracts of...
DALLAS, TX・39 MINUTES AGO
Bring Me The Sports

Watch: D'Angelo Russell tries to save ball, lands on A-Rod

It was a close call for the Timberwolves owner.
MINNEAPOLIS, MN・2 DAYS AGO
Bring Me The Sports

The two came to blows early on in Tampa.
TAMPA, FL・1 DAY AGO
Bring Me The Sports

Is it time for the Vikings and Packers to reset?

The hierarchy in the NFC North is changing and it might be time for the Vikings and Packers to change with it.
MINNEAPOLIS, MN・10 HOURS AGO
Bring Me The Sports

His former offensive coordinator is now calling plays in New York.
8 HOURS AGO
Bring Me The Sports

The 'immature trait' that is killing the Timberwolves

The next 11 games are part of the reason Minnesota has the hardest remaining schedule in the Western Conference.
MINNEAPOLIS, MN・2 DAYS AGO
Bring Me The Sports

Refs miss most obvious traveling call ever in Wolves-Rockets game

How did the refs miss that?
MINNEAPOLIS, MN・2 DAYS AGO
Bring Me The Sports

With Dawson Garcia, Pharrell Payne and Braeden Carrington out, the Gophers didn't have the firepower to match Indiana's star.
MINNEAPOLIS, MN・20 HOURS AGO
Bring Me The Sports

Kirill Kaprizov scored his 27th goal of the season for Minnesota.
SAINT PAUL, MN・1 DAY AGO
Bring Me The Sports

Brian Murphy: There’s nothing neutral about the NFL’s crusade for cash

The league and its Park Avenue money changers would love to poach the conference title games from home stadiums and loyal fans.
1 DAY AGO