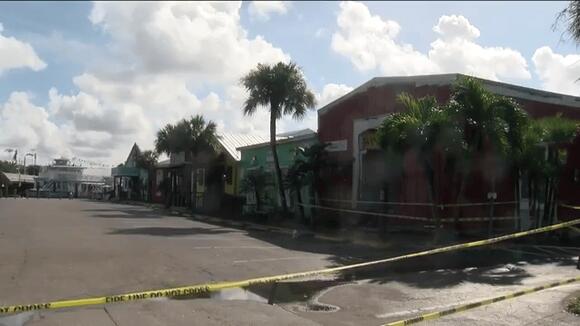 NAPLES, Fla. — The City of Naples told NBC2 that they believe Tin City will survive the fiery crash that occurred on November 25.

This all comes at the heels of Hurricane Ian, which put the fishing centre turned artisan market under feet of water in early October.

“Tin City has been around for 101 years. This building has too, so when we got the flood all the water from the river came up which was the muddy water, so what we did was remedied it — cleaned it — replaced drywall getting all the units back in shape for the tenants to come back and do a rebuild of their individual stores. All their inventory got devastated so it’s been pretty devastating for the last 50 to 60 days,” said Craig Ekonomos, the property manager for Tin City.

Since then, all thirty-plus businesses outside of the Pincher’s restaurant have been closed.

Police documents provided to NBC2 show Stephen Luis Alfredo was driving down Goodlette Frank S. in Naples at around 120 miles per hour around 1:30 a.m. when he lost control of his vehicle.

“Before I could finish the sentence, I said, that’s not going to end well – It literally went straight through under the light, and I knew it hit a building because I stay here. This is the area where I live. I didn’t see a car turn left or right. Just went straight through and you know as we’re driving closer, we see smoke coming from the building and we call — we were the ones to call 911. It was only us two on the roads, no one else. No one else caught the crash but us,” said Stacey Sylvestre, an eyewitness.

Alfredo “failed to stop or slow down,” according to the report. The Nissan Altima hit the curb at the intersection between Goodlette Frank S. and U.S. 41, traveled about thirty yards airborne, and struck the Naples Winery at Tin City. The car then traveled through the building and exited in the rear.

Alfredo claimed he “blacked out” prior to the crash.

The car reportedly burst into flames when fire crews arrived on the scene.

According to the report, the driver was transported to an area hospital with minor injuries.

“I thought he got stuck the way the cops were — but to see — imagine how fast that must’ve been,” said Sylvestre.

No other injuries have been reported at this time.

The driver was charged with reckless driving.

Since the crash, City of Naples building inspectors have conducted an initial assessment.

“There was a lot of damage to the exterior structural components of that building. There was also interior structural damage to walls, a lot of shelves, rack systems that got destroyed and scattered about. A lot of that debris came out the back of the vehicle,” said Thomas Tucker, the Deputy Building Official for the City of Naples.

The City of Naples’ inspection revealed severe damage to the Naples Winery at Tin City, and the building now has a no-occupancy order in place. The other businesses at the complex, who have been actively rebuilding to open their doors once again — will not be affected.

“The damage from the vehicle did not cause any damage to the adjoining tenant spaces at Tin City. They’re safe to occupy and to do what they need to do to open and continue their business,” said Tucker.

NBC2 asked Tucker and the City of Naples when they believed that Tin City would be ready to reopen following the crash and the hurricane damage from October.

“The components we’ve observed can definitely be built back. This type of project, if everything fell into place, could probably be done within, say 2-3 months,” said Tucker.

FORT MYERS, Fla. — Police are on scene of an accident between a dump truck and a trash truck at Fowler Street and First Street in Fort Myers. Crews are cleaning up the spill caused by the crash. Southbound traffic is being diverted onto Edwards Drive. As of now,...
FORT MYERS, FL・2 DAYS AGO
NBC2 Fort Myers

NORTH FORT MYERS, Fla. — An SUV crashed into a power pole on Slater Road early Friday morning after the driver lost control. The crash, which happened around 1:00 a.m., resulted in power loss in the area. Our NBC2 crew arrived on scene and saw downed power lines. One...
NORTH FORT MYERS, FL・1 DAY AGO
NBC2 Fort Myers

CAPE CORAL, Fla. — Burning incense caused a house fire this past weekend in Cape Coral. Fortunately, all of the residents got out safely. Fire crews responded to the burning blaze in the 2500 block of SW 4th Place after receiving the call just before 1 a.m. Sunday morning.
CAPE CORAL, FL・2 DAYS AGO
NBC2 Fort Myers

COLLIER COUNTY, Fla. – An Estero man was killed in a crash on State Road 29 (E Main Street) in Collier County after losing control of his vehicle due to suffering a medical episode Thursday night. The crash happened just after 7 p.m., according to the Florida Highway Patrol.
ESTERO, FL・1 DAY AGO
NBC2 Fort Myers

LABELLE, Fla. — A family of seven is looking for housing after a fire destroyed their LaBelle home. The incident happened Monday afternoon on Shawnee Avenue. Debbie Isom said she woke up and her surroundings looked like the inside of a “red furnace.”. She said she remembers hearing...
LABELLE, FL・13 HOURS AGO
NBC2 Fort Myers

MONROE COUNTY, Fla. — Two men were arrested Thursday after they were found staying in a Key Largo home without the owner’s permission. According to the Monroe County Sheriff’s Office (MCSO), 63-year-old John Wehrle of Cape Coral and 60-year-old Charles Huston of Colorado assumed they were ‘welcome’ at the island home on Jolly Roger Drive and strolled right through the unlocked front door.
CAPE CORAL, FL・18 HOURS AGO
NBC2 Fort Myers

LEHIGH ACRES, Fla. — One person was taken to the hospital after a fire broke out at a Lehigh Acres home Friday morning. Lehigh Acres Fire Control and Rescue District got to the home on Washington Avenue after a call came in around 3:03 a.m. One of the victims...
LEHIGH ACRES, FL・1 DAY AGO
NBC2 Fort Myers

CAPE CORAL, Fla. — The City of Cape Coral wants food trucks to pack up and move every night. They say this is an effort to keep food trucks “mobile”. Food trucks stay parked in the same spot all day, where their customers can easily find them.
CAPE CORAL, FL・1 DAY AGO
NBC2 Fort Myers

COLLIER COUNTY, Fla. — Collier County deputies attempted to stop a car Thursday morning that they believed may have been stolen. The driver would not stop and then ran from the traffic stop in the area of Mission Hills Drive and Collier Boulevard, according to the Collier County Sheriff’s Office.
COLLIER COUNTY, FL・2 DAYS AGO
NBC2 Fort Myers

Florida man challenges everyone to fight after bars close

CAPE CORAL, Fla. — The line between night and morning was blurred Saturday in Cape Coral. Last call had come and gone, and the lingering crowd was beginning to disperse. Cape Coral Police watched the clock click past three in the morning, yet the street outside the establishments was still a frenzy of activity.
CAPE CORAL, FL・22 HOURS AGO
NBC2 Fort Myers

FORT MYERS, Fla. — Insurance companies are trying to get people checks they’ve been waiting on. Walter Pilkons went to the event for help. He said, “we had 106 inches of water in the house, total loss of contents, but the house stood up, and that left us in this funny in-between area. Do we need to knock it down? Or not?”
FORT MYERS, FL・18 HOURS AGO
NBC2 Fort Myers

BONITA SPRINGS, Fla. — A Bonita Springs home looks like a complete loss following a shed fire that happened Tuesday. Bonita Spring firefighters responded to a structure fire in Bonita Terra at around 4 p.m. According to the Bonita PIO, the fire started in a shed and then spread...
BONITA SPRINGS, FL・3 DAYS AGO
NBC2 Fort Myers

CHARLOTTE COUNTY, Fla. — One person died, and five others were injured after multiple vehicles crashed into each other along U.S. 41 and Zemel Road in Charlotte County. According to the Florida Highway Patrol (FHP), a pickup truck towing a utility trailer was traveling south on U.S. 41 near Zemel Road. The second and third vehicles involved were traveling north on U.S. 41, approaching Zemel Road.
CHARLOTTE COUNTY, FL・3 DAYS AGO
NBC2 Fort Myers

SANIBEL, Fla. — The U.S. Postal Service has made a big delivery for people who live on Sanibel Island. Hurricane Ian ravaged the post office in Sanibel nearly four months ago. Since that time, residents have been without a post office, but not for much longer after mobile units arrived late Tuesday night in front of the current post office site.
SANIBEL, FL・2 DAYS AGO
NBC2 Fort Myers

NORTH FORT MYERS, Fla. — A North Fort Myers man said he is fighting a bacterial infection after coming in contact with canal water. On Sunday, Kurt Holthus said he went outside to clean his dock but then ended up with a trip to the emergency room. Knowing what lies in our Southwest Florida waterways following a hurricane, Holthus wore protective gear to power wash the dock.
NORTH FORT MYERS, FL・2 DAYS AGO
NBC2 Fort Myers

NORTHEAST CAPE CORAL, Fla. — It was encroaching 2:00 p.m. when Officer Shawn Frazin of the Cape Coral Police Department was checking out reports of reckless driving happening near Durden Parkway. The stretch of road backs up to an expanse of protected wildlife, and Cape PD heard about multiple...
CAPE CORAL, FL・3 DAYS AGO
NBC2 Fort Myers

LEE COUNTY, Fla. — A pair of late-night speeding sessions on separate occasions didn’t go as planned for two men in Lee County. On January 20, at 11:57 p.m., an FHP Trooper watched in awe as two vehicles zoomed down State Road 82 near 40th Street SW at astonishing speeds of up to 123 mph.
LEE COUNTY, FL・2 DAYS AGO
NBC2 Fort Myers

CAPE CORAL, Fla. — Corn took over the internet last year with the viral “Corn Kid” video. Now it’s taking over Ralfina Marinelli’s yard in Cape Coral. Marinelli first thought the mysterious plants were weeds. Then, they kept growing… so she thought it was bamboo. Once it sprouted corn, she realized it was corn stalks, but she had no idea how nearly a dozen of them ended up in her yard.
CAPE CORAL, FL・1 DAY AGO