Patrick Peterson Has No ‘Beef’ With Kyler Murray Despite Criticizing Him 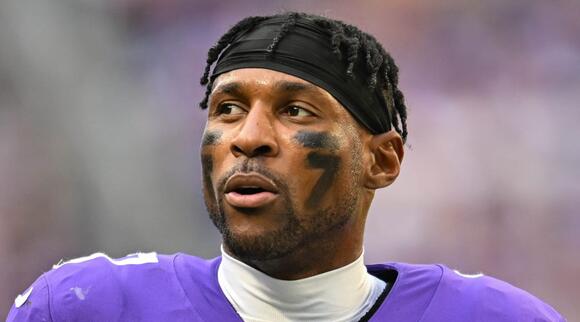 The Vikings cornerback said he didn’t mean to ‘disrespect’ his former teammate by his comments on Wednesday.

Vikings cornerback Patrick Peterson made headlines on Wednesday when a clip of him saying, “ Kyler Murray don't care about nobody but Kyler Murray,” on his podcast All Things Covered went viral .

On Thursday, Peterson was asked about his comment about the Cardinals quarterback, in which he said he didn’t mean to be “disrespect” his former teammate and he has no “beef” with him.

"What I meant by my comment was when you're a franchise quarterback, you have to carry yourself a certain way," Peterson said, via ESPN . "So if you're having bad body language, pouting, moping on the sideline, what type of energy do you think feeds off to your teammates?

"That's what I meant about Kyler. He cares about himself because he's not putting the team first. When you make a bad throw, and you come off to the sideline, you're dropping your shoulders, how do you think the defense feels? If our starting quarterback don't have any energy, no fire, that we can win this game, how can we? That's what I meant about Kyler caring about Kyler. I didn't mean any disrespect, in any fashion or form. And I might not be his mentor, but these are the things, tips, that can help him be a better football player in the long run."

Whenever the original clip went viral, Murray responded to the comment on Twitter saying Peterson had his number and could talk to him about it personally instead of ranting on his podcast.

However, Peterson noted on Thursday that he didn’t have Murray’s phone number until this week. Peterson then said he reached out to Murray this week, but as of Thursday afternoon, he had not heard back from the quarterback.

For more Arizona Cardinals coverage, go to All Cardinals .

I’ll never enjoy covering these stories but whenever someone sadly passes away we need to make sure it’s covered. If you’re a fan of USC or the Los Angeles Rams this persons death might hurt you more than on average. Former Cleveland Browns first round pick, Charles,...
LOS ANGELES, CA・2 DAYS AGO
Sports Illustrated

Why Chiefs Traded Tyreek Hill to Dolphins Instead of Jets

The receiver signed a four-year, $120 million contract with Miami ahead of the 2023 season.
KANSAS CITY, MO・2 DAYS AGO
Sports Illustrated

When Tony Danza Was the Eagles’ Kicker

A look back at a Disney almost-classic, starring Danza, with help from a future NFL kicker and a cameo from the Eagles’ new owner.
DALLAS, PA・12 HOURS AGO
Sports Illustrated

Things got personal on ‘First Take’ between Smith and Williams.
2 DAYS AGO
prosportsextra.com

Pittsburgh Steelers QB Won’t Be Back Next Season

It should come as no surprise that the Pittsburgh Steelers and QB Mason Rudolph will go their own ways this off-season. The Pittsburgh Steelers failed to make the playoffs this past season. They rallied to win six of their last seven games, but a 9-8 record wasn’t enough to earn playoff spot. It was the first year after long time starting QB Ben Roethlisberger announced his retirement.
PITTSBURGH, PA・1 DAY AGO
Sports Illustrated

The commentator said he is “totally perplexed” about what happened on Sunday night.
ARIZONA STATE・8 HOURS AGO
Sports Illustrated

Football didn’t work out for Bron Breakker but he’s an emerging star in WWE.
GEORGIA STATE・1 DAY AGO
Sports Illustrated

The new Broncos coach reportedly had no desire to work with the two-time Pro Bowler.
DENVER, CO・2 HOURS AGO
Sports Illustrated

Chiefs’ Andy Reid Was Asked to Pick the Greatest Rappers Ever

The mother of the Kelce brothers commented on the social media push for her to do the coin toss at Super Bowl LVII.
2 DAYS AGO
Sports Illustrated

The cornerback detailed why he and Patricia never connected.
PHILADELPHIA, PA・1 DAY AGO
Sports Illustrated

Andy Reid Has Had a Tremendous Week

The Chiefs’ coach on cheeseburgers, rappers, having energy for a chubby guy and more.
KANSAS CITY, MO・8 HOURS AGO
Sports Illustrated

The Minnesota tight end weighed in on the heartbreaking ending to the team’s 2022 campaign.
MINNEAPOLIS, MN・3 HOURS AGO
Sports Illustrated

The Fighting Irish are seeking a replacement for Tommy Rees, who left for Alabama on Friday.
SOUTH BEND, IN・1 DAY AGO
Sports Illustrated

Denver’s head coach made clear in his introductory press conference Monday that there’s going to be some changes in how the Broncos operate on and off the field.
DENVER, CO・2 DAYS AGO
Sports Illustrated

The lead-up to the Super Bowl is filled with nonsense and annoying things.
1 DAY AGO
Sports Illustrated

The Packers quarterback plans to spend four days and nights in complete darkness as he contemplates his NFL future.
GREEN BAY, WI・1 DAY AGO