Cowboys' improving run D gets another test in Colts' Taylor 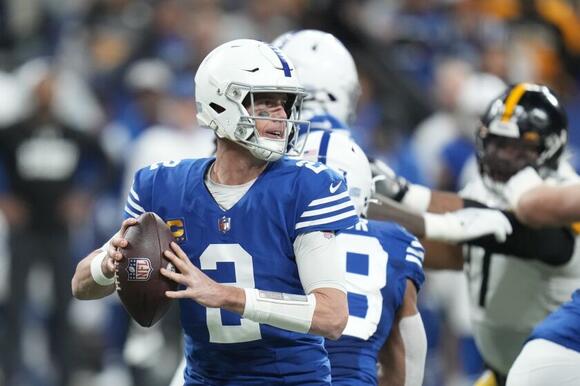 Jonathan Taylor is the third consecutive elite back the Cowboys are facing in a stretch that started with Dallas' defense struggling against the run.

The Cowboys won while keeping Minnesota's Dalvin Cook and Saquon Barkley under control. They'll try to make it 3 for 3 against Taylor and the Indianapolis Colts (4-7-1) on Sunday night.

Dallas coach Mike McCarthy thinks he has attended two college games in three decades on NFL coaching staffs. One was watching Taylor and Wisconsin against Iowa.

“Just his ability to run inside with the discipline and toughness,” McCarthy said. “I think he’s definitely a featured back, and I wouldn’t be surprised if he carries it north of 20 against us.”

There's a peek at one of the keys for the Cowboys (8-3) against Cook and Barkley. They had limited opportunities.

Dallas had the biggest road blowout in franchise history in a 40-3 rout of the Vikings , thus Cook had just 11 carries for the trailing team.

The Giants ran just 59 plays on Thanksgiving, and 35 were passes. So Barkley had just 11 attempts for 39 yards.

“We knew how important it was going to be to be able to set the edge,” defensive coordinator Dan Quinn said. “So (we) worked that as much as we could during a short week.”

The Colts are facing the short week after a 24-17 loss to Pittsburgh on Monday night, while the Cowboys are on extended break coming off the 28-20 Thanksgiving victory over New York .

Dallas leads the NFL in sacks and will face the offensive line that has allowed the most.

On offense, the Cowboys are among the league's best in the six weeks since quarterback Dak Prescott returned from a broken thumb on his throwing hand.

It's the fourth game for Matt Ryan since interim coach Jeff Saturday reinserted him as the starter for the Colts. The 37-year-old is facing the NFL's top passing defense.

“The one thing I’ve learned is you never know how games are going to shake out,” Ryan said. “It doesn’t matter which two teams show up and what you’ve done up until this point. We have a really good defense, too, that they have to go against.”

That's one of Prescott's points about the Colts, who are 10 1/2-point underdogs, according to FanDuel Sportsbook .

“Very fundamentally sound defense,” Prescott said. “As I tell you all the time, we’re not going to get caught up in records or think that we can just walk out there and beat these guys.”

Saturday acknowledged he made a mistake by not calling a timeout late in the loss to Pittsburgh.

But it’s not the only learning experience for the Colts this week. Saturday said he learned a lot about himself when he was playing center for Indy’s team in 2011, which went 2-14. Ryan had a couple of 4-12 seasons in Atlanta.

“You obviously want to be driving the ship,” Ryan said. “But I told the guys, in these kinds of situations I’ve learned more about players that I’ve played with than in really any other situation. I’ve gained respect and lost respect for certain guys as you’re going through these things.”

I KNOW THAT GUY

Quinn and Ryan spent five-plus seasons together as coach and quarterback of the Falcons. They'll always be linked by the 34-28 overtime loss to New England in Super Bowl 51 loss, when Atlanta led 28-3 in the third quarter.

“He is a rare and relentless competitor,” Quinn said. “I describe like he’s a wolf in sheep’s clothing. He comes across real clean cut and nice, but he is a tough (expletive) competitor.”

Indy’s offensive line has improved marginally in the three games since Saturday replaced the fired Frank Reich. But this may be the toughest matchup left on the schedule.

The Colts still rank among the league leaders in fewest sacks allowed since 2018, but they’ve given up a league-high 43 this season. Micah Parsons is second in the NFL with 12 sacks, and Dallas has 45.

The test will be significant for rookie left tackle Bernhard Raimann and new right guard Will Fries.

“These guys are getting sacks at an alarming rate,” said Saturday, a two-time All-Pro center. “They get ahead and it’s a track meet. You’re in trouble. I don’t care who you are, how good you are offensive line-wise. This is a very good group.”

Dallas receiver CeeDee Lamb is growing into the lead role after the offseason trade of Amari Cooper. And he already embraced the idea of adding free agent Odell Beckham Jr., who is expected to visit the Cowboys on Monday and could be close to a decision on his next team.

Lamb has two 100-yard efforts in the past three games after going 17 games without one dating to last season.

“Most definitely getting comfortable in this position,” said Lamb, who is second in the NFC with 857 yards receiving. “Honestly, at the beginning, it wasn’t the start I wanted or looking forward to, but I understand that it’s a long season.”

It looks like Dak isn’t doing too bad after his playoff loss to the San Francisco 49ers NFC divisional round this past Sunday…. Dallas Cowboys quarterback Dak Prescott has a new lady in his life, Louisiana State University swimmer named Jadyn Jannasch (her Instagram profile picture features her wearing a Cowboys jacket as well):
LOUISIANA STATE・2 DAYS AGO
thecomeback.com

When the Cincinnati Bengals take on the Kansas City Chiefs in the AFC title game on Sunday night, they’ll be doing it without three of their starting offensive linemen as La’el Collins, Alex Cappa and Jonah Williams will all be sidelined from the game with injuries. The three...
CINCINNATI, OH・12 HOURS AGO
San Diego Union-Tribune

Damar Hamlin released a video Saturday in which he says he's thankful for the outpouring of support and vows to pay it back, marking the first time the Buffalo Bills safety has spoken publicly since he went into cardiac arrest and needed to be resuscitated on the field in Cincinnati on Jan. 2
3 HOURS AGO
San Diego Union-Tribune

Anthony Edwards had 16 of his 34 points in the pivotal third quarter, D'Angelo Russell scored 25 points and the Minnesota Timberwolves held on for a 117-110 win against the Sacramento Kings
MINNEAPOLIS, MN・1 HOUR AGO
San Diego Union-Tribune

Joel Embiid won the battle of MVP candidates with 47 points and 18 rebounds as the Philadelphia 76ers extended their winning streak to seven games with a 126-119 win over Nikola Jokic and the Denver Nuggets
DENVER, CO・6 HOURS AGO
San Diego Union-Tribune

Kenyon Martin Jr. had a four-point possession with 31 seconds left to help the Houston Rockets beat the Detroit Pistons 117-114 on Saturday night in a matchup of the NBA's worst teams
DETROIT, MI・2 HOURS AGO
San Diego Union-Tribune

Sam Reinhart scored 17 seconds into overtime to cap a late scoring flurry and give the Florida Panthers a 4-3 victory over the NHL-leading Boston Bruins on Saturday night
BOSTON, MA・2 HOURS AGO
San Diego Union-Tribune

Jarace Walker had a career-high 25 points and seven rebounds and No. 3 Houston rallied from an 11-point second-half deficit to defeat Cincinnati 75-69
HOUSTON, TX・6 HOURS AGO
San Diego Union-Tribune