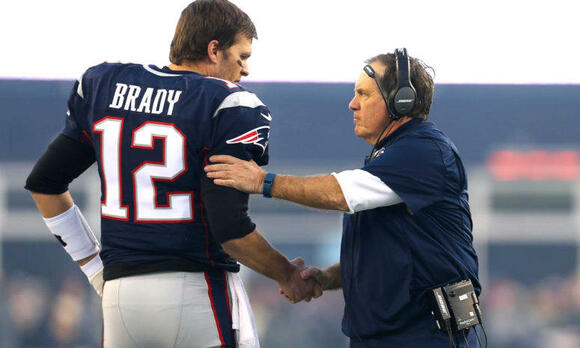 Despite the intrigue surrounding Tom Brady’s potential return to New England in the offseason, the Patriots are apparently quite content with their current quarterback.

FOXBORO — The concept of a New England Patriots reunion with franchise legend Tom Brady may already be a thing of the past.

Following a Wednesday morning offering from The Athletic , suggesting that New England may be a potential landing spot for the legendary quarterback (who is slated to enter free agency in the offseason) in 2023, a prominent member of the Patriots beat has indicated that New England is quite happy with their current signal-caller.

During a Thursday afternoon appearance on 98.5 The Sports Hub’s Zolak and Bertrand Show, ESPN’s Mike Reiss advised that second-year quarterback Mac Jones has the  support of the Patriots organization, from tip to tail.

“Full commitment to Mac,” said Reiss. “Like, make no mistake about it. They are all in on Mac. So, as we talk about this, I wouldn’t want anything to ever come across as if, like, they were second-guessing that decision.”

In just his first season as the Pats’ starter, Jones led all rookies with a 67.6 completion percentage and a 92.5 passer rating, while compiling 3,801 yards and 22 touchdowns.

Though he entered the 2022 season on the heels of an impressive rookie campaign, Jones has struggled to rekindle his previous success. The 24-year-old has completed 162 passes for 1,768 yards, with six touchdowns and seven interceptions. Though missing three games due to a high-ankle sprain has undoubtedly contributed to his regression, it is clear that the Alabama product has looked uncomfortable and even confused in New England’s ‘new-look’ offense.

Despite his struggles, Jones has persevered, demonstrating gradual improvement with each passing game. Still, it has been his determination that continues to make him beloved among his teammates. In fact, prominent pass catchers such as wideout Jakobi Meyers and tight end Hunter Henry have praised his quarterback’s ability to remain steady and focused, despite the rocky road he has traveled.

While anything is possible, a prospective merger between Brady and the Pats seemed like a remote chance, at best.  The future Hall-of Farmer is set to turn 46 prior to the star of the 2023 regular season. As such, Brady’s temporary return would likely be too risky to derail the progress they continue to make with their expected franchise quarterback of the future.

As for Jones, he will face his toughest test to date, as the Patriots ready themselves to take the field for an 8:15 p.m. kickoff with the Buffalo Bills (8-3) on “ Throwback Thursday ” at Gillette Stadium.

The Buffalo Bills are coming off a disappointing end to their season, losing 27-10 at home against the Cincinnati Bengals in the AFC Divisional round in the playoffs. Entering the offseason, the Buffalo Bills have started looking toward the future and made the tough decision to fire one of their long-tenured coaches.
6 HOURS AGO
Page Six

Dallas Cowboys quarterback Dak Prescott and Natalie Buffett have broken up after two years of dating, Page Six can exclusively reveal. Multiple sources confirm the longtime couple actually split around March 2022 but have kept it close to the vest. We’re also told Prescott has been casually dating. Reps for the former couple didn’t immediately return Page Six’s request for comment. The athlete, 29, and Buffett, 25, began dating sometime in 2020 based on social media photos, though it’s unclear exactly when they became official. She posted their first picture together in honor of his 27th birthday, captioning the outdoorsy shot at the...
1 DAY AGO
thecomeback.com

The Dallas Cowboys suffered a disappointing loss to the Philadelphia Eagles on Saturday night, and it seems like it’s still affecting team owner Jerry Jones. During the season, Jones does a weekly appearance on local radio station 105.3 The Fan. But following this weekend’s playoff loss, the Cowboys team owner abruptly canceled his appearance this week.
1 DAY AGO
Patriot Country

Aaron Rodgers reportedly could be traded this offseason. Could he really wind up in New England?
2 DAYS AGO
Patriot Country

If the New England Patriots elect to move on from Damien Harris this offseason, Saquon Barkley could be an attainable option.
ALABAMA STATE・6 HOURS AGO
JaguarReport

2023 NFL Draft: What Does Mel Kiper's Early Mock Project For the Jaguars?

With Mel Kiper's early 2023 NFL Draft mock out, we take a look at whether we agree with his pick for the Jaguars at No. 24.
JACKSONVILLE, FL・26 MINUTES AGO
VC Star | Ventura County Star

Former Ventura College and NFL linebacker Jessie Lemonier has died at the age of 25, the Detroit Lions confirmed Thursday. The 6-foot-3, 240-pound Lemonier was the SCFA Northern Conference Defensive Player of the Year in 2017, when he had 79 tackles, 18.5 tackles for a loss and 8.5 sacks for the Pirates. ...
VENTURA, CA・19 MINUTES AGO
Patriot Country

Swing lineman Bill Murray will be returning to Foxboro presumedly for his fourth training camp with the Patriots.
1 DAY AGO
Patriot Country

New England's rookies continue to earn praise for some stellar performances during the 2022 regular season.
9 HOURS AGO