Patriots vs. Bills Roster Moves: Trent Brown In, Why 2 Kickers? 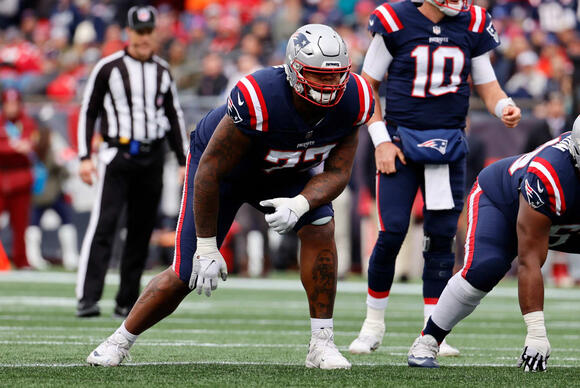 The Patriots and Bills are set to face off in the first of two regular-season meetings in Week 13 at Gillette Stadium.

FOXBORO — The New England Patriots have announced the elevation of guard Bill Murray and kicker Tristan Vizcaino from the practice squad for Thursday night’s matchup with the Buffalo Bills .

In addition, offensive tackle Trent Brown is expected to play, despite being added to the Pats injury report due to illness earlier in the day.

Murray has already served as a game day-elevation twice, against the Chicago Bears on Oct. 24 and at Minnesota Vikings on Nov. 24. He did not see action in those games.

The 6-4, 295-pound William & Mary product converted from the defensive line during training camp. He spent the duration of his initial two NFL seasons on the Patriots practice squad after signing as an undrafted rookie in 2020. Murray is likely to see at least some in-game action on Thursday, with several members of the Patriots offensive line fighting both illness and injury.

Vizcaino rejoined the Patriots for his third stint on the practice squad midway through November. The 26-year-old has seen some in-game action in 2022, going 2-for-2 on field goals and 3-for-3 on extra points in relief for the Arizona Cardinals. While he is not expected to spell incumbent Nick Folk for the kicking duties, Vizcaino will be able to handle kickoffs in what is expected to be a windy night in Foxboro.

The Patriots ruled out running back Damien Harris and offensive tackle Isaiah Wynn on the final injury report. An additional seven members of the active roster are now listed as questionable, including fellow linemen David Andrews, Yodny Cajuste and Trent Brown.

While Andrews and Cajuste are expected to be game time decisions, NFL Network has reported that Brown is expected to suit up, likely at a reduced snap count. Still, the 6-8, 380-pounder’s presence is good news for quarterback Mac Jones and the protection of his blind side against a stout Bills’ defensive front .

Kickoff between the Pats and Bills is set for 8:15 p.m. ET at Gillette Stadium.

Patrick Mahomes' wife, Brittany, wants all the smoke.  Brittany, who's never been afraid to speak her mind on social media, just posted a message for the Bengals.  Hint: It's not very friendly.  "Cancun on 3," she said on Twitter.  "Cancun on 3" has become a trendy phrase in the ...
CINCINNATI, OH・2 DAYS AGO
Athlon Sports

The Pittsburgh Steelers and Philadelphia Eagles have been in the NFL since its inception. The two teams even briefly combined forces during World War II and called themselves the Steagles. The players and coaches didn’t like it then and the two fan bases don’t like each other now. Fans from the same state rarely get along and the vitriol was on display after the Eagles made their second Super Bowl in five seasons.
PHILADELPHIA, PA・1 DAY AGO
Larry Brown Sports

Once again, the Dallas Cowboys failed to make a deep playoff run as they fell short losing to the San Francisco 49ers 19-12 last Sunday in the divisional round of the playoffs. The elite offense of the Dallas Cowboys sputtered and struggled, which lead to Jerry Jones and head coach Mike McCarthy to make a tough decision.
DALLAS, TX・1 DAY AGO
Whiskey Riff

It’s the sound of hearts breaking across Philadelphia and the state of Pennsylvania… and let’s be honest, everywhere else in the country, too. Eagles quarterback Jalen Hurts made a very rare public appearance with his girlfriend Bryonna “Bry” Burrows after the NFC Championship game this past Sunday, which is a surprise to many fans, as he is extremely private about his life outside of football.
PHILADELPHIA, PA・12 HOURS AGO
Patriot Country

Lynn Bowden becomes the 15th player signed to a futures deal by the Patriots prior to the start of the 2023 league year on March 15.
1 DAY AGO
Patriot Country

With Mac Jones and Bailey Zappe, New England isn't one of the 14 NFL teams with quarterback questions heading into the 2023 offseason.
1 DAY AGO
Larry Brown Sports

The Denver Broncos wanted to make a splash when hiring their next head coach, and they have done just that. Sean Payton has reached an agreement to become the head coach of the Broncos, according to multiple reports. The Broncos have agreed to a compensation package with the New Orleans Saints, who previously held Payton’s... The post Sean Payton lands head coach job appeared first on Larry Brown Sports.
DENVER, CO・7 HOURS AGO
Patriot Country

The New England Patriots coaching staff was back in action for the second of four practices at the East-West Shrine Bowl - which included the debut of star Boston College receiver Zay Flowers.
LAS VEGAS, NV・1 DAY AGO
Patriot Country

New England Patriots coach Bill Belichick had several conversations with one player during Day 3 of practice at the East-West Shrine Bowl. Plus, risers, fallers and additional notes and quotes from Las Vegas.
LAS VEGAS, NV・16 HOURS AGO
Patriot Country

Zay Flowers projects as one of the top slot receiver prospects in the 2023 NFL Draft.
2 DAYS AGO
Patriot Country

The Patriots are expected to be among the NFL's best-situated teams when it comes to financial flexibility and draft capital.
6 HOURS AGO
Patriot Country