Fireworks by Grucci has long history of lighting up skies, including holidays in Las Vegas 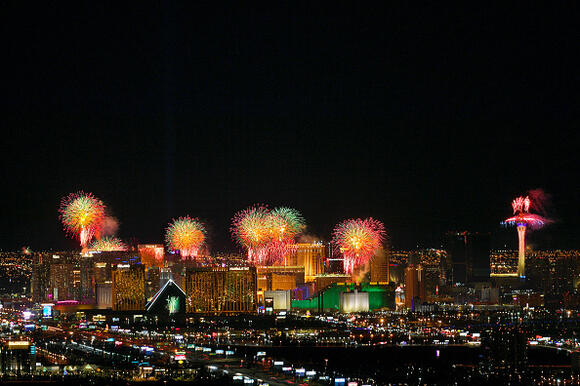 LAS VEGAS (KLAS) — The company set to light the sky over the Strip on New Year’s Eve has been creating pyrotechnic spectacles since the 1850s.

Fireworks by Grucci, a Long Island-based leader in the industry, has a history of producing themed fireworks extravaganzas in Las Vegas, but it also has created bang and brilliance at eight U.S. presidential inaugurations, the Olympic Games and World Fairs, and also is a Guinness World Records holder for the largest fireworks display in multiple cities.

The company’s history in the U.S. dates to when Angelo Lanzetta, founder and great-grandfather to Felix Grucci Sr., left southern Italy in 1870 for Elmont, New York, on Long Island.

According to the company’s website, Lanzetta ran the business until his death in 1899, and then his son, Anthony Lanzetta, took over. In 1923, Anthony Lanzetta brought in nephew Felix Grucci Sr. to serve as an apprentice. The company moved from Long Island to Miami briefly and returned to the Long Island village of Bellport in 1929.

Felix Grucci Sr. worked with his wife, Concetta, in developing a regional clientele and audience, especially in New Jersey and Connecticut, according to the website.

In 1976, the nation’s bicentennial year, the Grucci fireworks show on the Charles River for the Boston Pops Orchestra proved to be a major score.

Another major achievement came in 1979, when the Gruccis became the first American family to win the Gold Medal for the United States at the annual Monte Carlo International Fireworks Festival, beating highly regarded competitors from Denmark, France, Italy and Spain.

The company has produced shows at every presidential inauguration since Ronald Reagan in 1981 and has helped open major casinos in Las Vegas since The Mirage in 1989.

In addition, there have been shows at centennial celebrations for the Brooklyn Bridge and the Statue of Liberty.

Today, the business moves into the sixth generation; the company’s leader is Felix (Phil) Grucci, president and CEO.

On the website, Gruccu says: “The Grucci family has worked tirelessly to maintain our family heritage and core values and a commitment to creating lifelong memories for all they touch.”

Beyonce announced Wednesday morning that her long-awaited Renaissance World Tour 2023 will kick off this year and it will include a stop in Las Vegas.
LAS VEGAS, NV・3 DAYS AGO
8 News Now

Las Vegas party options for Pro Bowl week. One of the places where fans can watch the Pro Bowl game is at Topgolf.
LAS VEGAS, NV・2 DAYS AGO
8 News Now

‘The Elvises are ready,’ Las Vegas chapels prepare for wedding increase ahead of Valentine’s Day

Love is always in the air throughout the world's wedding capital, and the month of February historically proves that. As the Las Vegas Valley grows, so does its multi-billion-dollar wedding industry.
LAS VEGAS, NV・1 DAY AGO
8 News Now

LAS VEGAS (KLAS) — A piece of Las Vegas’ entertainment history is coming back to life. The Neon Museum is set to relight the iconic Lido de Paris sign Thursday evening. The sign will be lit next to the iconic Stardust Hotel sign, where the Lido de Paris was located. The Lido de Paris show […]
LAS VEGAS, NV・1 DAY AGO
8 News Now

From Beverly Hills To Las Vegas

Las Vegas(KLAS)-She brings her Southern Charm to Beverly Hills, says “Bless Your Heart” but in the most fashionable way. Sutton Stracke of The Real Housewives of Beverly Hills joins Jillian Lopez in studio to talk about her “Sutton” boutique and Real Housewives.
LAS VEGAS, NV・1 DAY AGO
8 News Now

One day after his arrest, sources told the 8 News Now Investigators that Nathan Chasing Horse lived at another home in North Las Vegas for six years. A man living in that neighborhood shared more about the things he saw during that time.
NORTH LAS VEGAS, NV・2 DAYS AGO
8 News Now

A mother and daughter are accused of stealing tens of thousands of dollars from a stroke victim in their care, police wrote in court documents the 8 News Now Investigators obtained.
LAS VEGAS, NV・16 HOURS AGO
8 News Now

One couple said they're lucky to be alive after their car was hit by another driver traveling nearly 100 miles per hour, while he was under the influence in North Las Vegas, police said.
NORTH LAS VEGAS, NV・8 HOURS AGO
8 News Now

LAS VEGAS (KLAS) — A man is accused of shooting and killing his girlfriend during a fight, according to Las Vegas police. David Kashich, 62, was arrested Thursday on charges of murder, assault with a deadly weapon, and owning or possessing a gun as a prohibited person. Police were called to the scene around 9:06 […]
LAS VEGAS, NV・17 HOURS AGO
8 News Now

LAS VEGAS (KLAS) — An ex-Las Vegas Metropolitan police officer will spend one year behind bars for choking and beating his stepson in 2020, a judge ruled Tuesday. John Woodruff, 32, was sentenced on two counts of child abuse, neglect or endangerment. He received a suspended sentence of 28 to 72 months behind bars and […]
LAS VEGAS, NV・2 DAYS AGO
8 News Now

A Las Vegas high school coding club is breaking boundaries and shattering stereotypes by having kids get out of their comfort zones.
LAS VEGAS, NV・1 DAY AGO
8 News Now

A Las Vegas man was sentenced to four years and nine months in prison after committing a series of robberies while on supervised release, the United States Department of Justice announced Friday.
LAS VEGAS, NV・14 HOURS AGO
8 News Now

LAS VEGAS (KLAS) — Police are asking for the public’s help in finding a missing man who was last seen on Saturday in downtown Las Vegas. Collin Best, 26, was last seen Jan. 28 near the 300 block of S. Casino Center Blvd, near Main Street and Ogden Avenue. He was wearing a red jacket, […]
LAS VEGAS, NV・2 DAYS AGO
8 News Now

The Aces announced the signing of Candace Parker -- their plum offseason acquisition -- on Wednesday in a news release and also announced another free-agent pickup in Alysha Clark.
LAS VEGAS, NV・2 DAYS AGO
8 News Now

LAS VEGAS (KLAS) — Police were called to investigate a homicide in the downtown Las Vegas area on Tuesday night after a report that a woman had been shot. The incident occurred at 1000 block of South 3rd Street, near Charleston and Las Vegas boulevards. Police received a call from a man in his 20s […]
LAS VEGAS, NV・3 DAYS AGO
8 News Now

Camaro from 1993 Waco siege for sale in Vegas

The car that cult leader David Koresh owned and is thought to be his escape car is for sale right here in Las Vegas. The 1968 Chevrolet Camaro SS 427 Coupe has been dubbed 'Armageddon's Relic' and is being sold at Vegas Auto Gallery by its current owner, Ghost Adventures host and the man behind the Las Vegas Haunted Museum, Zak Bagans.
LAS VEGAS, NV・1 DAY AGO
8 News Now

A federal report on guns and crime shows that police recovered and traced more than 23,000 weapons over a five-year span in Las Vegas, with pistols accounting for three of every four weapons.
LAS VEGAS, NV・18 HOURS AGO