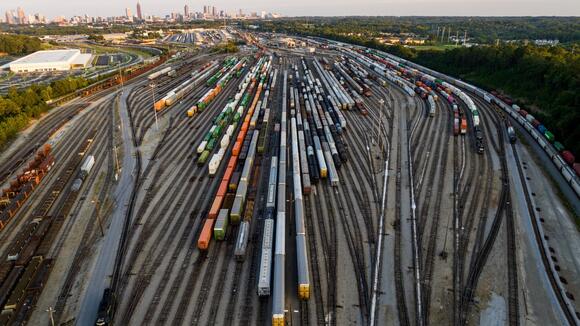 WASHINGTON (NEXSTAR) — A potentially devastating economic shutdown was narrowly averted on Thursday. Congress voted to force rail companies and unions to agree to a new labor contract, ending the threat of a rail worker strike .

After it pushed through the House on Wednesday, the Senate passed the bill Thursday to make rail companies and unions sign a new labor contract. That comes after several months of negotiations between the unions and companies failed.

“Nobody got everything they wanted in this negotiation. The companies moved. The unions moved,” Transportation Secretary Pete Buttigieg said.

Senator Chuck Schumer said the bill requiring them to sign a new contract keeps the economy on track.

“The two sides have come together so we can avoid the shutdown, which would be extremely damaging to the country,” Schumer said.

Without a deal the rail workers could’ve gone on strike, costing the economy billions of dollars per day as shipments of food, oil, and other goods ground to a halt.

“The special importance for economic security and even national security of a functioning rail system. There is simply no substitute for it,” Buttigieg said.

The sticking point in negotiations was paid sick leave for workers, which some unions wanted and the companies didn’t.

“People who are working at dangerous jobs in inclement weather have zero paid sick leave. That is outrageous,” Senator Bernie Sanders said.

The House did pass a bill to add paid sick leave to the new contract, but it didn’t get enough votes in the Senate. President Biden says that doesn’t mean that fight is over.

For now though, Congress says the immediate danger is over.

“That was urgent and necessary to avert a catastrophic National Rail shut down,” Speaker Nancy Pelosi said.

While it started as a cordial event, by the end, the speech had some of the rowdiest pushback from an opposing party in recent memory.
WASHINGTON STATE・5 HOURS AGO
WFLA

Sen. Rick Scott (R-Fla.) on Wednesday defended his proposal to sunset all federal legislation after five years and slammed President Biden as “confused” in response to Biden’s claim at the State of the Union address that some Republicans want to sunset Social Security and Medicare. “In my plan, I suggested the following: All federal legislation […]
WASHINGTON STATE・3 HOURS AGO
WFLA

The Hernando County Sheriff's Office is searching for the person who shot two people in Brooksville on Tuesday night.
BROOKSVILLE, FL・9 HOURS AGO
The Guardian

Slide 1 of 41: In the latest threat to Donald Trump's 2024 campaign, a major US political donor has just signaled that he won't be backing the former POTUS's next presidential bid. And political support might not be the only thing Trump is losing. Read on for the full surprising story. All dollar values in US dollars.
2 DAYS AGO
MEDIALINKERS NEWS

After more than a decade of advocacy and years of legislative effort, the Washington Treasury Department on Wednesday introduced the Working Family Tax Credit. The credit could offer a rebate of up to $1,200 for those who qualify. The tax credit is expected to benefit more than 400,000 low-income households in the state.
WASHINGTON STATE・19 HOURS AGO
WFLA

On what many families expected to be a night of fun at the fair, things turned to chaos after shots rang out at the fairgrounds in Arcadia Saturday.
ARCADIA, FL・1 DAY AGO
WFLA

A cat surrendered to a Florida animal shelter for being “too affectionate” has found his forever home thanks in part to a TikTok video shared by the Humane Society of Broward County.
BROWARD COUNTY, FL・1 DAY AGO
WFLA

A man has died after he was struck by oncoming cars while attempting to cross the road on Monday night.
BRADENTON, FL・1 DAY AGO
WFLA

A Hillsborough County Sheriff's Office cadet was arrested on Tuesday after he was accused of stealing from his former employer.
HILLSBOROUGH COUNTY, FL・8 HOURS AGO
WFLA

Residents digging through a collapsed building in a northwest Syrian town discovered a crying infant whose mother appears to have given birth to her while buried underneath the rubble from this week’s devastating earthquake, relatives and a doctor said Tuesday.
2 HOURS AGO
WFLA

President Biden avoided talking about some major topics during his first State of the Union address before a divided Congress on Tuesday. Here are five things Biden didn’t include in his speech. Student loan forgiveness Biden didn’t explicitly mention his student loan forgiveness plan, which is held up in the courts because of multiple legal […]
TEXAS STATE・14 HOURS AGO
WFLA

Often, we hear people complain about what garbage collectors don’t pick up. But for Barry and Susie Cort, it’s what they did pick up—by mistake— that has them furious.
DADE CITY, FL・1 DAY AGO
WFLA

A Tampa woman died early Tuesday morning after getting into a crash with a tractor-trailer, according to the Florida Highway Patrol.
TAMPA, FL・1 DAY AGO