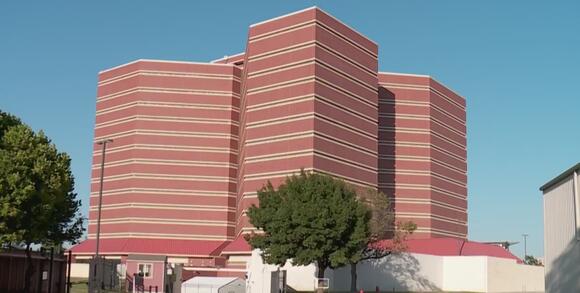 OKLAHOMA COUNTY, Okla. ( KFOR )- A current Oklahoma County Detention Center inmate has been behind bars for a total of 21 days now, but says he’s been having alarming medical issues that are a result of bed bug bites since day two.

45-year-old Jason Sheffield was booked into the detention center on November 10 on one count of aggravated trafficking in illegal drugs.

According to an incident report, Sheffield was arrested by the Oklahoma City PD Street Narcotics Unit near Santa Fe with three large plastic bags in the trunk of his vehicle.

Sheffield has been in contact with his girlfriend, Darlene Kaup since his incarceration.

They’ve spoken over the phone and through an authorized video chat.

The two spoke on the phone earlier this week in which Sheffield explained he understands why he’s behind bars and takes full responsibility for his crime.

However, he doesn’t believe his incarceration makes him any less of a human being.

“We’re being treated like we’re no longer human beings. Our civil and human rights are being violated in this place,” said Sheffield.

On November 11, Sheffield said he woke up in his cell with “really bad hives” and “lesions” all over his left arm and elbow.

Sheffield claims since day two, his medical condition has only gotten worse.

He said the hives traveled to his right arm, covered his fingers, and stretched up to his neck.

Sheffield described his skin condition as “intact half dollar sized lesions,” saying each one was so painful he couldn’t touch the skin around it.

He also said his hands and wrist couldn’t function normally because of it.

“So I hit the medical emergency number [the phone in his cell]. It took them about an hour to an hour and 45 minutes to come and get me,” said Sheffield.

Sheffield signed a HIPPA release form and the medical records were in our inbox November 22.

Sheffield said the Oklahoma County Detention Center Jail Administrator, Greg Williams pulled him into his office to have him sign the release form, but didn’t do so without an argument.

According to Sheffield, Williams questioned why News 4 was requesting a HIPPA release form and was confrontational with him.

Eventually, Sheffield said Williams allowed him to sign it.

The few days following Sheffield’s signing of the form, he said he wasn’t given his medication.

The Oklahoma County Detention Center Communications Director, Mark Opgrande told News 4 in a statement, “Staff has been attentive to his needs and strive to provide the best care.”

According to Sheffield’s medical records, he was treated several times between Nov. 10 and 22.

Sheffield is reported to have brought up the concern of a rash, swelling, or numbness to his body at least six times in that time frame.

Records also show he was given medication each time.

However, Kaup told KFOR with each medical visit, she saw him only getting worse.

Kaup said he wouldn’t get better unless the issue at hand was taken care of: bed bugs in his cell.

“He got bites from head to toe. And then it turned into some kind of allergic reaction and started getting blisters and bumps all over his body,” she explained.

Kaup stated in the year her and Sheffield have been dating, she has never seen him have an allergic reaction.

Kaup added she has called the detention center multiple times requesting a wellness check, but she was never given any updates despite being listed as Sheffield’s emergency contact.

She’s afraid to continuing calling the detention center though as she fears it’ll make life harder for Sheffield.

“Very, very stressful. I’m extremely worried about him and the way, when he tells me how they treat him, or should I say don’t treat him. I’m very fearful of his life,” said Kaup.

Opgrande said the detention center has inspected Sheffield’s cell in which bed bugs were not found.

The detention center claims they did spray down Sheffield’s cell just in case though.

The detention center reports having spent $26,000 so far from July to December on prevention and treatment.

The detention center is 13 floors high with approximately 1,200 cells.

“The facility has been sprayed top to bottom in the past two-and-a-half years,” stated Opgrande.

In those two-and-a-half years though, News 4 has spoken with former inmates who have shared their bed bug experience.

One even went as far as to mail his girlfriend an envelope filled with bed bugs back in November 2021.

Both Sheffield and Kaup have stressed that 15 inmates have died in the detention center this year, so they’re worried he’ll be number 16.

“It needs to be exposed. That’s why we’re doing this,” said Sheffield.

In the meantime, Kaup is considering taking legal action.

His preliminary hearing will be December 20 at 9 a.m.

Jason Sheffield is an IV drug user who's sores are caused from using dirty needles. He has been to state and federal prison. Now he is in jail again. Maybe he should stop pouring drugs into our daughters and sons.

I believe that the jail should be shut down and the staff and Greg Williams held accountable, granted you commit the crime you do the time but not to be treated lower than dogs, I hope he gets out soon and sue the crap out of the jail

These people haven't been to court, a least most haven't; they are accused. I would shut the place down in a heart beat. It's unimaginable people got to work, the talking to both the police officers and inmates. It is a hell hole at best.

More than 1,000 pounds of meth, heroin, and cocaine were taken off the streets. Nearly 400 guns and $1.3 million in cash was also seized.
OKLAHOMA CITY, OK・14 HOURS AGO
KFOR

OKLAHOMA CITY (KFOR)- One person was shot in the stomach in SW Oklahoma City around 4:20 this morning. OKCPD stated the shooting took place near Las Brisas Apartments at 2119 SW 39th St. The victim was taken to a nearby hospital with non-life threatening injuries. There is currently no information on the identity of the […]
OKLAHOMA CITY, OK・2 HOURS AGO
KFOR

The Oklahoma Medical Examiner has positively identified the remains of Athena Brownfield which OSBI recovered on January 17 in Grady County.
GRADY COUNTY, OK・1 DAY AGO
KFOR

A man has died as a result of a house fire in Oklahoma City on Friday.
OKLAHOMA CITY, OK・14 HOURS AGO
KFOR

Divers with the Oklahoma Highway Patrol were able to pull a stolen pickup truck from an Oklahoma river.
SHAWNEE, OK・22 HOURS AGO
KFOR

So far, no arrests have been made.
OKLAHOMA CITY, OK・1 DAY AGO
KFOR

Following a series of interviews and court documents, we're getting a more complete picture of what happened to a little girl who is presumed dead.
GRADY COUNTY, OK・1 DAY AGO
KFOR

Emergency crews on scene of semi. vs. car accident

Moore Public Schools says one of its coaches has been released from duty after learning of an alleged inappropriate relationship with a student.
MOORE, OK・15 HOURS AGO
KFOR

Oklahoma's Council on American-Islamic Relations has filed a lawsuit against the Oklahoma City Police Department, claiming a American Muslim Air Force veteran is being targeted by the department.
OKLAHOMA CITY, OK・1 DAY AGO
KFOR

Details are moving forward with the plans to build the new Oklahoma County Jail.
OKLAHOMA COUNTY, OK・11 HOURS AGO
KFOR

Edmond Police initially told KFOR an out-of-state caller claimed a man in Edmond was threatening to kill his family, then himself, so officials conducted a welfare check at the man's home near Santa Fe and Second.
EDMOND, OK・2 DAYS AGO
KFOR

The Edmond Police Department has confirmed the identity of the alleged suspect from a standoff that led to a terrifying discovery.
EDMOND, OK・1 DAY AGO
KFOR

Oklahoma City Police department is responding to the video of the tragic death of Tyre Nichols.
OKLAHOMA CITY, OK・9 HOURS AGO
KFOR

Authorities in Oklahoma City are asking for the public's help as they investigate an armed robbery.
OKLAHOMA CITY, OK・21 HOURS AGO
KFOR

Investigators learned that there was a fight between two people that ended in a stabbing.
OKLAHOMA CITY, OK・1 DAY AGO
KFOR

The Oklahoma Highway Patrol says a 95-year-old woman died just over a week after being involved in a Payne County wreck.
PAYNE COUNTY, OK・18 HOURS AGO