An often overlooked Swedish fighter may be the jet Ukraine needs to take on Russia now, experts say 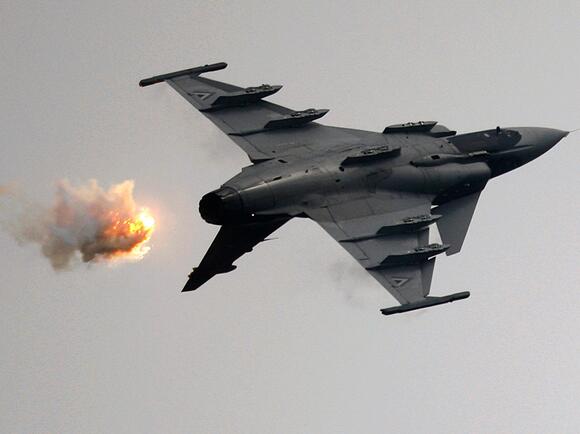 As Russia's beleaguered air force continues to launch attacks in Ukraine, Kyiv finds itself in need of air assets, including new fighter aircraft.

The best jet for Ukraine is the Gripen, a 4.5th-generation multirole fighter jet built by Sweden's Saab and which is "by far the most suitable candidate in terms of operational requirements," according to Justin Bronk, Nick Reynolds, and Jack Watling of the Royal United Services Institute, a British think tank.

Ukraine needs a fighter with missiles that offer "the greatest possible effective range under low-altitude, subsonic launch conditions" in order to bypass Russian air defenses , including its S-400 missile system, which can target Ukrainian jets at higher altitudes, the three experts said in a recent report.

The Gripen can carry the Meteor air-to-air missile, which is effective in those conditions thanks to its ramjet design and has a 100 km range , allowing it to be fired from safer distances. The jet can also be outfitted with anti-ship missiles.

The Gripen has a suite of electronic-warfare capabilities specifically designed to reduce the effectiveness of the radars used by Russia's jets and surface-to-air-missile systems.

Additionally, as Ukrainian airstrips and airbases remain under threat from Russian long-range missiles, Kyiv needs a jet that can operate from shorter, more rudimentary airstrips and from basic airbases with smaller ground crews in order to minimize the risk of the jets being detected and destroyed on the ground.

The Gripen was "designed from the outset for ease of maintenance" and for operating from secondary or improvised airfields, according to the report, which noted that the Gripen can be refueled, "re-armed and given basic maintenance by teams of just six ground crew using two vehicles on small airbases or highways in cold weather."

Only one member of that crew needs to be highly trained, which would ease the strain on Ukraine's already overstretched air force, while most US fighter jets require extensive ground support equipment, which "would be difficult to build without being observed and hit" by Russian strikes, the report adds .

The Gripen's operational cost — including fuel, repairs and maintenance, and personnel — is also lower than that of the US-made F-16, F-18E/F, and F-35; the French-built Rafale; and the European-designed Eurofighter, according to a paper produced for a study commissioned by Saab.

An underdog in limited supply

Saab's JAS 39 Gripen was designed largely with Russia in mind. The 4.5th-generation jet can reach Mach 2 and can supercruise, maintaining supersonic speeds without relying on an afterburner.

Although the jet has never seen combat, it has performed very well in exercises against 4th-generation aircraft that are on par with Russia's jets.

Nevertheless, it has not been adopted by many countries. Besides Sweden — which uses only the Gripen — the jet's main operators are South Africa, Brazil, and Thailand. Other countries, including India and Indonesia, are also considering the jet.

The jet's nemesis seems to be Lockheed Martin's F-35, a fifth-generation fighter. Saab's Gripen is not as advanced as the F-35, as it lacks stealth and other capabilities, but the firm's CEO has said that the US's geopolitical clout also creates an uneven playing field when it comes to international fighter-jet competition.

The Gripen has lost bids to the F-35 in Denmark, Norway, Finland — all neighbors of Sweden — and Poland. It has also lost a number of bids to Lockheed's F-16, a fourth-generation fighter that is widely used around the world.

Despite the failed bids, the Swedish jet is well regarded by aviation experts for being highly capable, relatively easy to use, and inexpensive.

The Russian air force's failure to achieve air dominance in Ukraine has made it more cautious, focusing on long-range missile attacks and mostly keeping its aircraft over friendly territory.

Therefore, "a few modern Western fighters with long-range missiles able to meet the Russians on technically equal or even superior terms would likely have a disproportionate deterrent effect," the RUSI report says.

Kyiv has shown interest in the Swedish fighter. In an interview in October, Ukrainian Defense Minister Oleksii Reznikov said he was "sure" that acquiring "fighter jets like F-16s, F-15s, or Gripen from Sweden will also be possible" in the future.

Stockholm is also increasing its support for Kyiv. It recently announced a military aid package worth $287 million, its largest to date, that includes air-defense systems.

Yet finding Gripens for Ukraine may not be easy. Producing new jets takes years, meaning any sent to Kyiv will likely have to come from Sweden's own fleet or from those of other countries.

The only NATO members that operate the jet are the Czech Republic and Hungary, the latter of which maintains good relations with Russia.

Constantine Atlamazoglou works on transatlantic and European security. He holds a master's degree in security studies and European affairs from the Fletcher School of Law and Diplomacy. You can contact him on LinkedIn .

The video sparked discussions on social media about what kind of weapon could be responsible for the attack.
19 HOURS AGO
Business Insider

This help line is a growing effort to give Ukraine vital advice on repairs and maintenance as it pushes weapons to their limits.
WASHINGTON STATE・1 DAY AGO
Business Insider

Fox News host Tucker Carlson compared Justin Trudeau to Fidel Castro and said he was "completely in favor of a Bay of Pigs operation" in Canada.
2 DAYS AGO
Business Insider

"They brought two prisoners who refused to go fight and they shot them in front of everyone," he told CNN.
17 HOURS AGO
Insider

"The girls from Ukraine and Switzerland simply ran from me like fire," Anna Linnikova told Evening Moscow.
LOUISIANA STATE・20 HOURS AGO
CBS News

Bakhmut, eastern Ukraine — The city of Bakhmut was home to around 70,000 people before it found itself on the front line of Russian President Vladimir Putin's unprovoked war to seize Ukrainian territory. Almost 12 months of war have left Bakhmut barely recognizable.          Once renowned for sparkling wine, the small city has been reduced to a hollowed-out shell of its former self. But Bakhmut, and the Ukrainian forces defending it, have hung on. "Bakhmut holds" has even become a battle cry for the nation as it fights back against the Russian invaders. But it's only just holding...
23 HOURS AGO
Benzinga

Former U.S. Defense Secretary Robert Gates said ​​Russian President Vladimir Putin believes it’s his “destiny” to recreate the Russian Empire. What Happened: Gates, in an interview on NBC’s “Meet the Press,” said that the Russian president had made it part of his vision to retake old territories to recreate the Kremlin's former geographic sphere of influence.
2 DAYS AGO
msn.com

Three months after it got wrecked trying and failing to punch through Ukrainian defenses, the Russian navy’s unhappiest marine brigade is back in action. And apparently getting beaten, again. The bewildering and tragic plight of the 155th Marine Brigade is a reminder of one of the fundamental flaws in...
1 DAY AGO
Business Insider

The president of EU and NATO country Croatia has taken a wildly different stance to its allies regarding Russia's invasion of Ukraine.
1 DAY AGO
Newsweek

"There is no other way to talk to these fools," State Duma member and former military commander Andrey Gurulyov said.
1 DAY AGO
Business Insider

The former British prime minister said he spoke with Putin weeks before he invaded Ukraine and tried to persuade the Russian president to stand down.
2 DAYS AGO
Reuters

LONDON, Jan 30 (Reuters) - Russia told the United States on Monday that the last remaining pillar of bilateral nuclear arms control could expire in 2026 without a replacement due to what it said were U.S. efforts to inflict "strategic defeat" on Moscow in Ukraine.
WASHINGTON STATE・2 DAYS AGO
Business Insider

Russia wanted to use Ukraine's nuclear power plants to bring Ukrainian officials to heel and to keep Europe from intervening.
2 DAYS AGO
Daily Mail

Defence chiefs have launched an urgent investigation after bolt heads were found to have been glued back together inside the nuclear reactor chamber on board HMS Vanguard.
1 DAY AGO
Business Insider

Ukraine official gloats after drone strike on weapons facility in Russian-allied Iran: 'Ukraine did warn you'

Mykhailo Polodyak, a senior aide to President Volodymyr Zelenskyy, made the comment after multiple reports of a drone strike on a building in Isfahan.
1 DAY AGO
Business Insider

I flew on Singapore's Airbus A380 for 12 hours in economy from Germany to Singapore. The seat was surprisingly amenity-heavy and made the long trek easy.

I had more than enough space, but the seat's generous pitch and width should be comfortable for even larger passengers.
2 DAYS AGO
Business Insider

A Chinese invasion of Taiwan could bring about a global recession and significant military losses for both countries and possibly others.
3 DAYS AGO
Business Insider

Here's how a wildly outgunned US Navy pilot outfoxed one of the Soviet Union's best jets, scoring a string of kills in a legendary dogfight

Royce Williams was recently awarded the Navy Cross for his display of "extraordinary heroism" during the Korean War air battle.
19 HOURS AGO
Business Insider

Russia is preventing dual-citizen migrant workers from leaving as it mulls another round of military call-ups, per UK military intel.
1 DAY AGO