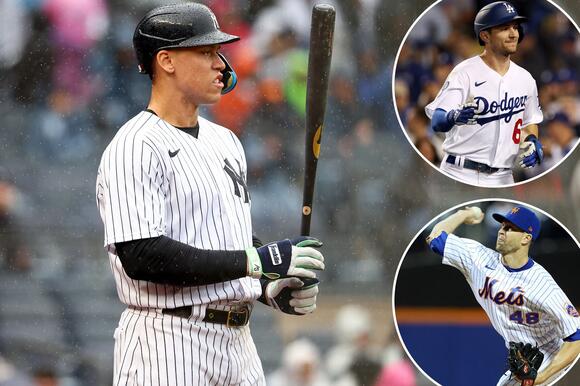 The nine top free agents, all likely to command nine-figure deals, remain on the board. But if history is a guide, they may start signing soon — maybe at the winter meetings, beginning this weekend.

Predicting free agency isn’t something to be tried at home. But here’s how we’d guess today:

1. Aaron Judge: The clear No. 1 guy has only two known teams seriously in the bidding, no reflection on him and all about the dollars he’ll command — $300 million plus. (The Dodgers may have rare money concerns, and are focusing on pitching and shortstop.) The Yankees remain favored. But if he’s upset at the October booing, or possibly the spring offer (or team announcement of such), or prefers to be nearer his parents in Linden, Calif., two hours from San Francisco, he has a fine second option. Although, one rival exec doubts the Giants: “He’s going to leave the greatest market to go across country to a team where it’s hard to hit homers? Come on.” Favorites: 1. Yankees; 2 Giants.

2. Jacob deGrom: Mets people seem to think he prefers to return (well, he could have fooled me!), and there’s some concern about losing their homegrown uber-talent and watching him win Cy Young awards elsewhere, so he may still be their top remaining target. The Rays’ recent mention, via SNY, the closest place to his DeLand, Fla., hometown, seems absurd, as they are known for getting a bargain, not for paying $40 million (and doubling their payroll!) for the possibility of greatness (deGrom made $400,000 per inning in 2021-22). Favorites: 1. Mets; 2. Rangers.

3. Carlos Correa: The Twins are expected to go hard to keep their surprise signee. But could he become a consolation prize for the Giants? Favorites: 1. Twins; 2. Giants. 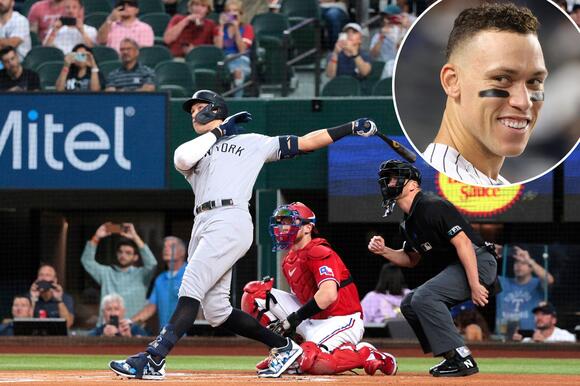 $300 million could just be the starting point for Aaron Judge

4. Trea Turner: Philly fans have targeted him, although some in the front office also like Xander Bogaerts (baseball president Dave Dombrowski has Boston ties). Turner has the Nats link to Bryce Harper and his wife is from New Jersey. Favorites: 1. Phillies; 2. Dodgers.

5. Xander Bogaerts: This time he’s willing to consider teams other than the Red Sox, and the Dodgers, Padres, Giants, Cubs, Phillies and many others are interested. He and Boston started slowly, but don’t they need him? Favorites: 1. Red Sox; 2. Phillies.

6. Dansby Swanson: If rumors are true that the Braves didn’t accede to his $140 million counter — the same deal Trevor Story and Javier Baez got — it’s obvious why some Atlanta people are pessimistic. Still, he is from Georgia. Favorites: 1. Cubs; 2. Braves.

7. Justin Verlander: “If he doesn’t stay with the Astros, he’ll probably go to the Dodgers,” says the exec of an interested team. Houston sees it that way, too, as he has a home in LA. And word as of midweek is the Astros and Verlander weren’t close. The Yankees and Mets are interested (he is close with Gerrit Cole). Favorites: 1. Dodgers; 2. Mets/Yankees.

8. Carlos Rodon: He’s improved his position more than anyone. Makes more sense for Texas than deGrom due to relative youth. Giants presumably would like him back, too. Favorites: 1. Rangers; 2 Yankees.

9. Brandon Nimmo: While he’s not Judge, he’s the next best outfield option. The Mets are concentrating on pitching at the moment and would need to play catch up. Rays and Jays among others in. Favorites: 1. Giants; 2. Mets.

It’s a mystery why some fine lefty relievers Andrew Chafin, Matt Moore, Brad Hand and Zack Britton are still looking for jobs. “Strange,” one executive called the remaining market glut.  Michael Wacha and Zack Greinke are the top two starting pitchers still free. Wacha is seeking a two-year deal. Greinke has been negotiating with his old Royals team all winter.  There are still some starting-caliber shortstops left — including Elvis Andrus and Jose Iglesias. In the outfield there’s Jurickson Profar and David Peralta.  The Twins are viewing Carlos Correa’s deal as a 10-year, $270 million deal, at least for now (though we know...
2 HOURS AGO
New York Post

‘Japanese ace’ Kodai Senga will be talk of Mets this spring

The Mets have five veterans in their starting rotation, but only four of them are known quantities.  When spring training commences in Port St. Lucie, Fla., in 2 ½ weeks, much of the curiosity will revolve around the “wild card” of the group, Kodai Senga, the Japanese ace whom the Mets signed last month to a five-year contract worth $75 million. Senga, who will turn 30 on Monday, will join Justin Verlander, Max Scherzer, Jose Quintana and Carlos Carrasco to give the Mets a deep and experienced rotation. In an effort to get a jump on understanding Senga, pitching coach Jeremy Hefner,...
QUEENS, NY・1 HOUR AGO
New York Post

The Angels were having a great winter, with one prescient, cost-efficient player move after another (by this winter’s pricey standards) — adding Tyler Anderson, Carlos Estevez, Hunter Renfroe and others for under $100 million. Then team owner Arte Moreno dropped the bomb. He abruptly changed his mind and is staying as owner.  And so, with that one unexpected call, the chances the Angels keep two-way superstar Shohei Ohtani — which is what matters to Orange County baseball now — very likely dropped from not too great to even less great.  One rival flat-out says: “The chance of him being an Angel on...
ORANGE COUNTY, CA・4 HOURS AGO
MLB Trade Rumors

Former second baseman Jeff Kent has been up for Hall of Fame consideration for a decade, with this year marking his last crack at induction via the Baseball Writers Association of America. Kent received 46.5% of the vote during this cycle, well shy of the 75% needed for induction. He falls off the ballot and will no longer be considered by the BBWAA.
2 DAYS AGO
New York Post

Jason Kelce isn’t against trash talk by any means. He is, however, when it’s towards a foe such as Dexter Lawrence. Kelce caught his Eagles teammate Brandon Graham targeting Lawrence during the coin toss ahead of their Divisional Round matchup with the Giants. “We running right at you, 9-7,” Graham yelled at the Giants’ star tackle. “And you know not to run this way!” Lawrence, a lover of smack talk himself, gave it right back to his rival. “I want that,” he told Graham. “I want that!” Aware of the damage Lawrence could inflict on him, Kelce revealed Thursday he had some advice for...
PHILADELPHIA, PA・3 HOURS AGO
New York Post

Joe Schoen knew help was needed. He knew his personnel staff had identified players capable of providing that help. He wanted to give head coach Brian Daboll better options. He knew the Giants required an injection of talent in certain areas. But Schoen could not make the moves he wanted to make. The first-year general manager understood what was required, but did not do it. Man, oh man, was that tough on him, especially when the Giants did not win in a four-week stretch and it looked as if the playoff berth they worked so hard to attain might be slipping away. “There...
1 DAY AGO