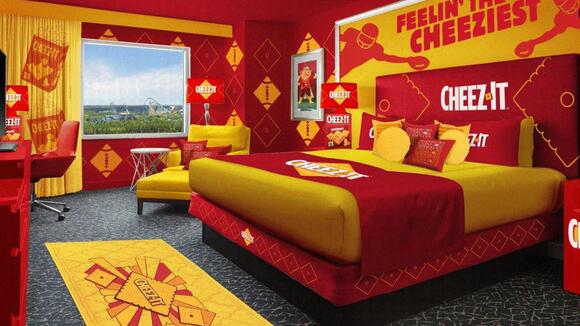 We won't pretend to know your life aspirations, but if waking up in a hotel room resembling the inside of a cheese cracker snack box happens to be on your bucket list, you could be in luck.

Cheez-It, titular sponsor of the Cheez-It Bowl and the new Cheez-It Citrus Bowl, is granting four college football players and some lucky fans (it's all relative) an opportunity to envelop themselves in the essence of the cheesy snack.

Cheez-It aims to ink its first-ever name, image and likeness (NIL) deal with one ACC, Big 12, SEC and Big Ten athlete by having them check-in to decked out hotel rooms the night before their respective Cheez-It backed bowl game showdowns.

The Cheez-It box chic rooms will be located in the team hotels.

As for the selected fans? They'll be sleeping in the endzone at Camping World Stadium. Their accommodations will mimic the same Cheez-It box aesthetic as the players' rooms, naturally.

If you can't get doused in a Cheez-It bath, a la the Cheez-It Bowl victory celebration, this is surely the next best thing.

Nyckoles Harbor, the No. 39 player in the ESPN 300 football recruiting rankings, chose South Carolina and plans on suiting up as a wide receiver/tight end hybrid.
SOUTH CAROLINA STATE・2 DAYS AGO
ESPN

Inspired by the lifesaving medical attention Damar Hamlin received on the field during a game last month, the NFL and American Heart Association will provide free CPR education in Arizona throughout Super Bowl week.
ARIZONA STATE・15 HOURS AGO
ESPN

Tommy Rees is leaving Notre Dame for Alabama, so what does this mean for both programs?
TUSCALOOSA, AL・8 HOURS AGO
ESPN

Our ESPN Betting Analysts offer their best advice on the most popular quarterback and running back prop bets to consider for Super Bowl LVII.
KANSAS CITY, MO・19 HOURS AGO
ESPN

The GOAT is hanging them up ... again. After 23 seasons, seven titles and countless records, Brady got congratulations from around the sports world.
TAMPA, FL・2 DAYS AGO
ESPN

Jordan Spieth's daring second shot over a cliff at the eighth hole in last year's Pebble Beach Pro-Am will be harder to replicate this year after an adjustment that Gary Young, the PGA Tour's chief referee for this week, illustrated to ESPN.
PEBBLE BEACH, CA・2 DAYS AGO
ESPN

The Raiders have granted QB Derek Carr permission to speak with teams that have already agreed to the compensation Las Vegas is looking for in a potential trade, sources told ESPN.
LAS VEGAS, NV・9 HOURS AGO
ESPN

ESPN 60 junior Labaron Philon, the No. 1 men's basketball prospect in the state of Alabama, committed to Auburn on Friday afternoon.
AUBURN, AL・13 HOURS AGO
ESPN

A misdemeanor menacing charge against Bengals running back Joe Mixon has been dismissed. Authorities reserved the right to refile the case at a later date.
CINCINNATI, OH・12 HOURS AGO
ESPN

The rise of the same-game parlay, America's new favorite way to bet

David Purdum explores the history behind the same-game parlay and why it's become one of the most popular ways to bet a sporting event.
NEW JERSEY STATE・1 DAY AGO
ESPN

After weeks of negotiations failed to find an agreement on an early move, Texas and Oklahoma are slated to join the SEC in 2025, sources told ESPN.
NORMAN, OK・17 HOURS AGO
ESPN

As college football's 2023 recruiting cycle wraps up, we track the signings and offer a rundown of national signing day.
GEORGIA STATE・2 DAYS AGO