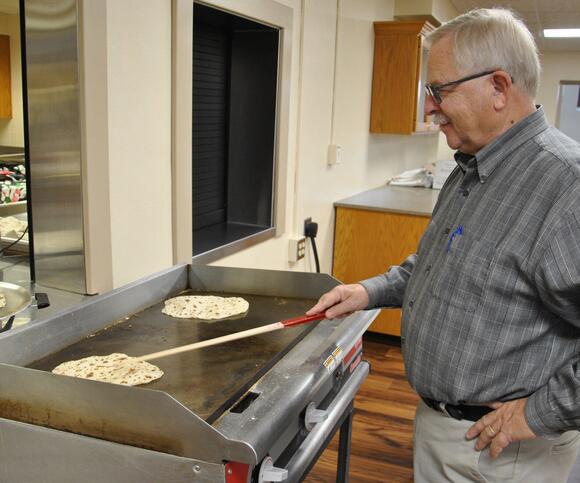 Flour covered their shirts and occasionally puffed into the air as about 30 people worked together in the kitchen of First English Lutheran Church in Faribault to make lefse Thursday morning.

Separated into various stations, some were rolling dough, some cooked on the special grills, some placed the lefse in wax paper to cool, and others were putting them into plastic bags. Each workstation contributed to the process, allowing for about 1,200 servings of lefse to be made within just a few hours.

The lefse will be for sale at the church Saturday, along with other goodies. The main draw each year is the traditional Scandinavian goodies, including krumkake and rosettes, said Pat Rice, one of the organizers of the annual Advent bake sake. But there are also many other baked treats as well as jams and jellies.

It's the church's main fundraiser, Rice said. People are lined up at the doors when they open.

"It draws a lot of people," she said. "People come in on Saturday, here at the door, and it's like a cattle call. They just come running in. They want the lefse and the Scandinavian stuff. But we'll have all types of baked goods."

Another one of the organizers, Sara Schrader, gave an anecdotal example about the frenzy of lefse lovers.

"We had our pastor — well, he's retired now — but we had him do the doors, to greet the people and stuff," she said. "He about got trampled by the little old ladies looking for the lefse. He said, 'Well, I just had to move out of the way and let them come in.'"

Lefse is a traditional Norwegian food consisting of potatoes, flour, cream and butter. As a round flatbread, it is similar to a tortilla or pita bread, and can range in thickness.

While the lefse is typically paired with butter and brown sugar and enjoyed as a sweet treat, there are many variations. Some even fill their lefse with mashed potatoes and meat.

The other traditional Scandinavian treats that will be at the bake sale include krumkake, which is smaller, harder and cone-like, and rosettes, which are crispier and have a unique floral shape.

Some members of the church provided some ingredients from their own farms. Kwik Trip donated all the milk and cream. Thrivent gave the group $500 for other ingredients.

The bake sale's proceeds go toward various groups in the community and abroad. Some funds will go to St. Vincent de Paul's food shelf, some will go to international missions. The church rarely keeps any of the proceeds, excluding a few times when some funds were gifted to church members who were struggling financially.

This year, Rice is excited about adding a Christmas craft sale, where they'll sell baskets, ornaments and other holiday items.

The bake sale dates back to the 1940s, when the congregations of three Norwegian-speaking churches in Faribault were deciding where to build a unified church. The entrepreneurial women of the church raised the most funds and got to make the final call.

"I think the man actually had a different spot located but they didn't have money," Rice said. "Then the women kind of wanted this spot here."

Rice said bake sales were more than fundraisers. They were also "a chance for women to get together, because most women would have been at home raising families. And coming here, they could be together. Probably could speak Norwegian together."