‘Guardians of the Galaxy Vol. 3’ Trailer Unveiled At CCXP22 In São Paulo 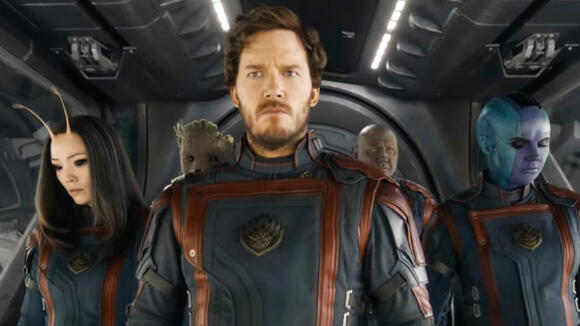 James Gunn ’s swan song as writer-director of the Guardians of the Galaxy series took another step forward Thursday, as the trailer for Vol. 3 was previewed at CCXP22 In São Paulo, Brazil.

In the clip, Pratt reminds us, “We’ve been gone for quite a while. But no matter what happens next, the galaxy still needs its guardians.”

Watch the trailer above.

Matt Grobar contributed to this story.

EXCLUSIVE: Lena Headey (Game of Thrones), Yara Shahidi (Grown-ish), Isabela Merced (Father of the Bride), Lana Condor (Moonshot), Millicent Simmonds (A Quiet Place) and Iris Apatow (The Bubble) are set to lead buzzy action-thriller Ballerina Overdrive, which will be produced by Deadpool, Bullet Train, John Wick and Fast and the Furious director David Leitch. The Witcher: Blood Origin director Vicky Jewson will direct the feature about a troupe of ballerinas who find themselves fighting for survival as they attempt to escape from a remote inn after their bus breaks down on the way to a dance competition. Filming is set to...
16 HOURS AGO
Deadline

EXCLUSIVE: Yellowstone, TV’s top-rated drama, may end in spectacular fashion.  Deadline understands that Taylor Sheridan, co-creator and showrunner, Paramount Global and Paramount Network are moving to end their signature show in its current form. But they are plotting a potential franchise extension to continue the Dutton saga, a new show with Matthew McConaughey in talks to star.  It is unclear which of the Yellowstone cast will move over to the McConaughey-led series, but it is expected to include several of the big stars.   “We have no news to report. Kevin Costner is a big part of Yellowstone and we hope that’s the case for...
TEXAS STATE・2 DAYS AGO
Deadline

The BBC has been forced to apologize after an image of Viola Davis from January’s Golden Globes was shown on its news channel with a headline identifying the Oscar winner as history-maker Beyoncé. BBC News’ rolling coverage of the Grammys included a few seconds period when the image of Davis was matched with the caption “Beyoncé’s Big Night,” before the segment moved on to the next image. BBC News has in the past hour apologized via a Twitter statement and said the error “fell below the BBC’s usual standards.” “We apologise for the mistake last night when our news channels briefly showed a...
TEXAS STATE・2 DAYS AGO
Deadline

Matthew McConaughy has been tapped to voice the iconic King of Rock ‘n’Roll, Elvis Presley, in Agent Elvis (fka Elvis King) an adult animated series about the King himself. McConaughey also will executive produce the series, which hails from Priscilla Presley and John Eddie, Sony Pictures Animation, Authentic Brands Group and Titmouse. McConaughy’s Elvis is a global superstar by day, ass-kicking vigilante by night who eventually joins the secret agency “TCB” as Agent Elvis.  Co-created by Priscilla Presley and John Eddie, in Agent Elvis, Elvis Presley trades in his jumpsuit for a jet pack when he is covertly inducted into...
TEXAS STATE・2 DAYS AGO
ComicBook

Jeremy Renner has shared the latest update on his recovery from his recent snowplow accident. On Sunday, the actor took to Instagram to post a photo of his "physical therapy Sunday", with a number of devices and exercise equipment he is using in the process. This comes after Renner had previously revealed on January 21st ...
2 DAYS AGO
Deadline

Expanding TV universes is the hottest trend right now. Bosch, one of the early adopters with Bosch: Legacy, is forging ahead with two police dramas inspired by the work of bestselling author Michael Connelly, which are in development at Amazon Studios. The first, the Untitled J. Edgar project, follows Harry Bosch’s former partner, Detective Jerry Edgar, who is tapped for an undercover FBI mission in Little Haiti, Miami. In this glamorous city, he is forced to balance his new life with the gritty underbelly of the city, while being chased by his mysterious past. Jamie Hector, who starred opposite Titus...
TEXAS STATE・1 DAY AGO
Deadline

EXCLUSIVE: Succession‘s Matthew Macfadyen is the newest addition to the cast of the Hitchcockian thriller Holland, Michigan. The Prime Video film from director Mimi Cave (Fresh) will see him star opposite Nicole Kidman and Gael García Bernal. While Holland, Michigan is said to concern secrets that lurk beneath a Midwestern town, specifics as to the plot of the film scripted by Andrew Sodroski are under wraps. Blossom Films’ Kidman and Per Saari are producing alongside Pacific View Management & Productions’ Peter Dealbert, and Churchill Films’ Kate Churchill. Pic will stream in more than 240 countries and territories worldwide. Macfadyen is best known...
TEXAS STATE・2 DAYS AGO
Deadline

Inside The Capitol For The State Of The Union: Under The Hot Lights, Joe Biden Vs. GOP Hecklers Gives A Glimpse Of The Drama To Come

Twenty minutes after ending his State of the Union address Tuesday, President Joe Biden was still shaking hands in the double doorway of the House chamber, even though many members having already left, much of the room was already cleared and Speaker Kevin McCarthy had already called it a night.  Related Story State of the Union: Joe Biden’s Speech Gave A Glimpse Of Potential 2024 Presidential Run; “Let’s Finish The Job” Related Story Marjorie Taylor Greene Screams "Liar" At Joe Biden During SOTU; POTUS Taunts GOP Over Medicare & Social Security Sunset Proposals Related Story State Of The Union Speech: How To Watch Biden's Address To...
TEXAS STATE・17 HOURS AGO
Deadline

EXCLUSIVE: Additional cast members have been revealed for the first series of ITVX’s The Winter King, produced by His Dark Materials and Doctor Who outfit Bad Wolf. Based on Bernard Cornwell’s Warlord Chronicles, the series, which has just wrapped in the UK, stars Iain de Castecker as Arthur Pendragon. It follows Pendragon’s exploits as he evolves from outcast to legendary warrior and leader. Eddie Marsan plays High King Uther, Ellie James is Nimue, and Nathaniel Martello-White plays Merlin. The new cast includes Jordan Alexandra (Mammals) as Guinevere, “the exacting, beautiful and ambitious exiled-Princess of Henis Wyren”; Steven Elder (The King) as Bishop Bedwin,...
TEXAS STATE・34 MINUTES AGO
Deadline

Disney is calling their five-time Oscar-nominated Black Panther: Wakanda Forever the most watched Marvel premiere ever on Disney+ on a global basis. Without supplying viewership figures, the company said Monday that the claim is based on hours streamed for the pic over its first five days. The Ryan Coogler-directed sequel, which has amassed $842.3 million at the global box office, dropped February 1 on Disney+ after an 83-day theatrical window. Meanwhile, Samba TV, which measures viewership across a panel of 3 million U.S. smart TVs, says the Live+4D household viewership was 2.1 million. That’s a notable number, tracking 400% ahead of...
TEXAS STATE・2 DAYS AGO
Deadline

‘Little Richard: I Am Everything’s Lisa Cortés Strikes First-Look Development Deal With Museum Of The City Of New York

EXCLUSIVE: Renowned documentarian Lisa Cortés has entered into a first-look development agreement with the Museum of the City of New York, the goal being to hone documentary IP based on the museum’s exhibitions. News of the deal — initiated by producer Jon Sechrist — follows the Sundance world premiere of Cortés’ latest critically acclaimed feature doc, Little Richard: I Am Everything, which was nominated for the Grand Jury Prize in U.S. Documentary Competition and sold to Magnolia Pictures.  Cortés will now look to build a creative pipeline from MCNY’s 100 years of exhibitions to the screen, with plans for projects on food,...
NEW YORK CITY, NY・14 HOURS AGO
Deadline

Super Sunday is upon us — and with it, Madison Avenue’s annual spending spree, which has seen the Big Game’s Hollywood quotient rise noticeably in recent years. Celebrity product pitches date back to the days of leather helmets, of course, but in the increasingly rare air of the Super Bowl they have started to overtake the left-field breakouts of the past by the likes of Puppy Monkey Baby or beer-loving frogs. With Fox’s telecast commanding a peak level of more than $7 million for 30-second spots, producers and brands again are banking on stars in a big way. Super Bowl LVII,...
ARIZONA STATE・2 DAYS AGO
Deadline

EXCLUSIVE: Shudder has acquired multiple territories for the indie thriller Influencer from Kurtis David Harder — the filmmaker with whom it’s previously been in business on titles like Spiral. The award-winning feature, which launched its festival run at last year’s Brooklyn Horror Film Festival, will bow on the streamer this spring in the U.S., Canada, Australia, New Zealand, the UK, Ireland, Spain, Portugal and Latin America. Influencer tells the story of Madison (Emily Tennant), a popular social media influencer who is having a lonely and uneventful trip in Thailand despite what she tells her followers on Instagram. While reflecting on her boyfriend...
TEXAS STATE・16 HOURS AGO
Deadline

No stranger to controversy, Joe Rogan this week offered the following generalization about Jews on his massively popular Spotify show: “The idea that Jewish people are not into money is ridiculous. That’s like saying Italians aren’t into pizza.” Rogan was speaking to onetime MSNBC contributor Krystal Ball about Rep. Ilhan Omar’s 2019 tweet that Israel’s defenders in the U.S. were motivated solely by money. “It’s all about the Benjamins baby,” wrote Omar at the time. The tweet drew a swift rebuke from leaders on both sides of the aisle, including then Speaker of the House Nancy Pelosi. Omar later recanted,...
TEXAS STATE・1 DAY AGO
Deadline

Netflix has given a series order to The Madness, a conspiracy thriller starring Emmy winner Colman Domingo. The eight-episode limited series hails from Chernin Entertainment via its first-look deal with Netflix, creator and co-showrunner Stephen Belber (O.G., The Laramie Project) and co-showrunner VJ Boyd (Justified, S.W.A.T.) In The Madness, media pundit Muncie Daniels (Domingo) must fight for his innocence and his life after he stumbles upon a murder deep in the Poconos woods. As the walls close in, Muncie strives to reconnect with his estranged family – and his lost ideals – in order to survive. Belber and Boyd executive produce with...
TEXAS STATE・16 HOURS AGO
Deadline

EXCLUSIVE: Hannah John-Kamen (Ant-Man And The Wasp) and Theo Rossi (Sons of Anarchy) are set to star in the sci-fi thriller Rachel, which Highland Film Group is launching for next week’s EFM. The film will follow new mother Rachel (John-Kamen) who seemingly has the perfect life except she doesn’t recall the recent birth of her baby boy or even being pregnant. Her cookie-cutter husband Stephen (Rossi) deflects her probing questions as strange neighbors begin stalking her. Flooded with memories of an 11-year-old girl who seemed to be her daughter, the film will chart how Rachel’s perfectly constructed world begins to tear...
TEXAS STATE・2 DAYS AGO
Deadline

EXCLUSIVE: The furor over a Chinese spy balloon that flew over U.S. airspace has further chilled D.C.-Beijing tensions, but the entertainment industry already has been swept up in the heightened atmosphere of American hawkishness. Hollywood studios and producers are poised to get a new level of scrutiny over their dealings with China — reflecting a bipartisan hardline toward Beijing and escalating concerns over its influence. A little publicized provision of a recently passed defense bill restricts the U.S. government from spending funds on movies that, to gain entry into the Chinese marketplace, are altered in the face of Chinese government dictates. The...
2 DAYS AGO
Deadline