Richard Allen’s attorneys speak out, call into question evidence: ‘Rick has nothing to hide’ 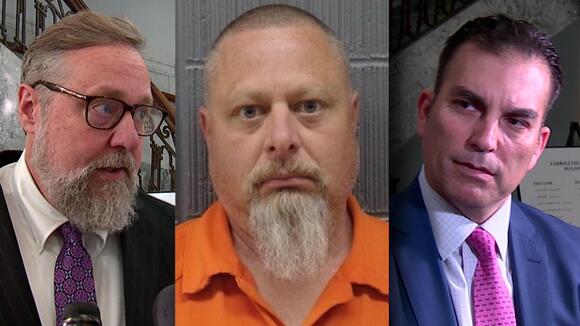 DELPHI, Ind. — The attorneys for Richard Allen, the man accused of murdering Abby Williams and Libby German in Delphi in February 2017, have fired back against the evidence presented by investigators in the recently released court documents .

Attorneys Brad Rozzi and Andrew Baldwin stated they argued on behalf of unsealing the court documents because “Rick has nothing to hide” and that they hope releasing the information would lead to tips that “assist us in proving his innocence.”

“Rick is a 50-year-old man who has never been arrested nor accused of any crime in his entire life,” Allen’s lawyers said. “He is innocent and completely confused as to why he has been
charged with these crimes.”

Allen’s attorneys chose to speak out after stating that both police and the prosecutors have been able to conduct multiple press conferences over the past five-plus years while Allen has only had a single post-hearing press conference in which to “assert his innocence.”

The attorneys went on to question the evidence mentioned in the court documents and asked if “a single magic bullet” is proof of guilt.

“It is a bit premature to engage in any detailed discussions regarding the veracity of this evidence until more discovery is received, but it is safe to say that the discipline of tool-mark identification (ballistics) is anything but a science. The entire discipline has been under attack in courtrooms across this country as being unreliable and lacking any scientific validity. We anticipate a vigorous legal and factual challenge to any claims by the prosecution as to the reliability of its conclusions concerning the single magic bullet.”

Allen’s attorneys went on further to point out that Allen’s Ford Focus is “not, in any way, similar to the distinctive look of the PT Cruiser or Smart Car that was described by witnesses.”

“It seems that the CCSD is trying to bend facts to fit their narrative,” the lawyers said.

The attorneys went on to detail Allen’s character by stating in the five years since Allen provided police with information he never got rid of his vehicle, his guns, or threw out his clothing. Nor did he alter his appearance or relocate to another community.

“He did what any innocent man would do and continued his normal routine,” the attorneys said.

The lawyers brought up how Allen voluntarily assisted in helping authorities after Libby and Abby went missing, claiming it was Allen who contacted the police and voluntarily discussed being on the trail that day, not the police who came to Allen.

“Without Rick coming forward, the police probably would not have had any way of
knowing that he was on the trail that day,” the attorneys said.

According to his lawyers, after Allen shared information with police and conservation officers voluntarily he didn’t hear from the police again for five years. The lawyers point out police contacted Allen two weeks before a contested sheriff’s election and within days of a lawsuit being filed where a Carroll County deputy claims he was demoted over suggestions offered for the Delphi murders investigation.

Allen’s lawyers also questioned the Carroll County prosecutor’s previous allegations of others being involved in the slaying of the Delphi girls stating there was “no mention in the PCA about a second suspect involved in the killing.”

“The defense is confused by such discrepancies in the investigation and will be in a better position to respond as more discovery is received,” Allen’s lawyers said.

Allen’s lawyers stated their intent moving forward is to scrutinize the discovery and give attention to the tips their team is receiving and offer this information to the public as long as a gag order isn’t put into place preventing them from doing so.

Read the entire statement below:

“I feel a court of law is the proper and impartial setting for this matter to be vetted and not within the dominion of speculation or assumption of a public or social media arena. Patience and time must be afforded to the system, granting all aspects of the case to be brought to light.”

The Grant County Sheriff's Office has a man in custody in connection with a deadly shooting that happened over the weekend.
GRANT COUNTY, IN・7 HOURS AGO
FOX59

Marion County prosecutors bouncing back to score courtroom victories in 2023

INDIANAPOLIS — The COVID pandemic shut down of Indianapolis courtrooms in 2020 combined with the move last year to a new courthouse and a talent drain that saw veteran prosecutors leave their posts along with increased juror demands to overcome the standard of reasonable doubt to cast guilty verdicts led to a rebooting of the […]
MARION COUNTY, IN・4 DAYS AGO
FOX59

The Howard County Sheriff's Office said deputies were told that 37-year-old Nathan A. McKinney was driving a red Dodge Charger in the area of East State Street and was possibly in possession of drugs and guns.
HOWARD COUNTY, IN・3 DAYS AGO
FOX59

1 man dead in Grant County after accident with semi-truck

A Ford Focus was driving westbound when it suddenly crossed the center line into the eastbound lane.
GRANT COUNTY, IN・4 DAYS AGO
FOX59

Deep dish, thin crust, fire grilled — there’s no shortage of ways to make a pizza. Yelp is praising the wonder that is pizza in 100 different ways with its 2023 list of the top places for pizza in the United States and Canada. A trio of Indiana pizza spots made the cut, including two […]
INDIANAPOLIS, IN・4 DAYS AGO
FOX59

January’s coldest arrives in wake of departing snows; Top snowfall totals are in and a warm front Friday brings wind and a renewed snow chance

2023 has opened as one of the warmest on record but for the first time in weeks, real polar air is sweeping into the state. There are still some lingering light snow showers and winds remain brisk. We’ve had multiple reports of blowing and drifting snow on north/south roads from Clinton, Tipton and Madison counties […]
TIPTON COUNTY, IN・4 DAYS AGO
FOX59

INDIANAPOLIS – Congratulations to Noblesville’s Preston Roberts for winning the Friday Night Fast Break Play of the Game from January 20, 2023. Roberts displayed some quick hands on defense to take the ball away from Franklin Central and then took off down the court for the uncontested dunk in the Millers’ win over the Flashes. […]
NOBLESVILLE, IN・3 DAYS AGO
FOX59