Mystery solved: North Carolina pilot, 23, who fell out of small plane had opened a hatch to throw up accidentally plummeted to the ground, autopsy finds

A North Carolina pilot who mysteriously fell from a small aircraft, after he'd opened a hatch to throw up during a turbulent emergency landing, has had his death ruled an accident, officials say.

Charles Hew Crooks, 23, had been complaining that he'd felt unwell as the 1983 CASA C-212 aircraft began to descend toward Raleigh-Durham International Airport on July 29.

An autopsy obtained by WRAL after the deadly fall 'concluded that the decedent had gone aft, likely to vomit from the open ramp, and accidentally fall from the aircraft.'

Crooks had been flying with another pilot for a private company that had been dropping skydivers in a small field.

During the flight the aircraft encountered an issue with its landing gear, prompting the pilot in command to notify air traffic control to change course.

The plane encountered turbulence and Crooks told the pilot he was not feeling well, the autopsy report read. 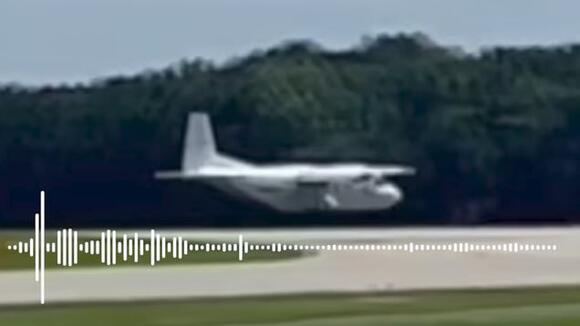 'They were flying at approximately 3500 feet with the rear ramp open for ventilation. The aircraft encountered moderate turbulence,' the report said.

Crooks is believed to have then walked toward the open ramp to vomit when he accidentally fell to his death.

'At some point, the decedent (copilot) opened a cockpit window for ventilation and possibly to vomit.

'Sometime after, he told the pilot that he felt he was going to be sick and apologized.

'He then departed the cockpit towards the open rear ramp; at some point, the pilot realized that he had apparently fallen from the aircraft.'

At the time of the incident, Crooks did not have a parachute, and his body was found in a backyard in the town of Fuquay-Varina.

Earlier reports revealed the pilot told investigators that Crooks had become upset 'about 20 minutes into the diversion to RDU, after conducting approach and emergency briefings.'

In August, an audio recording of two unnamed Federal Aviation Administration employees telling a 911 dispatcher that the damaged plane was heading to the airport was released.

The pilot onboard had apparently told them at the time that Crooks had 'jumped out of the aircraft.'

'We have a pilot that was inbound to the field,' a controller told the 911 dispatcher, according to the audio file.

'His co-pilot jumped out of the aircraft. He made impact to the ground and here are the coordinates.'

'All we can do is recovery at this point,' FAA personnel said at the end of the 911 call.

'I mean, I don't know. I've never heard...this is the craziest thing I've ever heard'

The call lasted about 13 minutes, with the controllers stating several times that the co-pilot had jumped.

The airplane also had substantial damage to its fuselage, the National Transportation Safety Board specified in its report.

The plane's pilot in command, whose name has not been released, sustained minor injuries. He was taken to Duke Hospital before eventually being released. He is in good condition.

In a 40-minute exchange between the unidentified pilot and air traffic control, there was oddly no mention or hint of Crooks falling from the plane.

The pilot can be heard saying: 'Emergency, we've lost our right wheel. We would like to proceed to Raleigh and make a landing at Raleigh.'

He adds: 'We have two persons on board. We have enough fuel on board that will last us for the next four hours.' 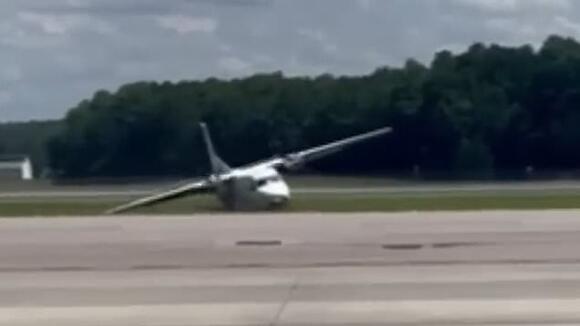 'More clarification, did you try landing on Raeford West?' he asks. 'Did it [the wheel] fall off while still in the air?'

'We were attempting to land,' the pilot said. 'We made contact with the ground and had a hard landing and decided to go around and at that point we lost the wheel.'

When air traffic control questioned how they intended to land, the pilot said: 'Going to go in as slow as we can, and I guess we are going to put it on the belly.' He then repeated that the plane's right wheel had fallen off.

Multiple law enforcement agencies were standing by once the plane hit Runway 5R-23L at Raleigh-Durham International Airport around 2.40 pm.

But there was one person on the plane, with no sign of Crooks, the second co-pilot.

The family living on the property of where Crooks was found later told local news outlets, they heard a loud thud and called police.

The 23-year-old's father said flying was his son's 'lifelong dream' and that he was a former flight instructor who was certified to fly in all types of conditions.

He told WRAL that Crooks had recently told him how 'he wouldn't trade places with anybody in the world. He loved where he was.'

The aircraft was owned by Colorado-based Rampart Aviation. The company didn't respond to DailyMail.com's request for comment.

The 10-seater plane, made in Spain in 1983, wasn't making a commercial flight at the time of the incident.

I think everyone should stop giving their thought on this and let the guy go peacefully. Whatever the situation of his death, be suicide or a different reason for his death....please pray for this young man. Find something else to put your time into. R.I.P ❤️🙏

exactly how did he plan to throw up out on the rear ramp? you go on that ramp when you are ready to jump off. unbuckle, walk ,stagger to the back of the plane lean outside to upchuck? yeah I don't see that happening.

very fishy. the pilot has changed his story from he jumped to he fell. He says he'd gotten all upset and then jumped!? Then he fell? His father said he was a seasoned flight instructor.

Florida mother found dead in street near SUV with her sleeping child inside ID’d, family says she was pregnant

Alana Sims, 22, was identified by her family as the woman who was found dead in a residential street in Tampa, Florida, near an SUV where her toddler was sleeping inside.
TAMPA, FL・1 DAY AGO
Daily Mail

Air China flight CA8524, travelling from Xi'an to Wenzhou, encountered strong air currents while flying at a high altitude. No injuries have been reported.
2 DAYS AGO
Daily Mail

Indiana man Edgar Garay's submerged body was located on Monday by Puerto Rico Emergency Bureau divers after he fell off the cliff near a lighthouse in Cabo Rojo the previous day.
INDIANA STATE・1 DAY AGO
Daily Mail

The child is understood to have been left in the car on Railway Parade at Glenfield, in Sydney's southwest, as temperatures reached 34C on Thursday.
11 HOURS AGO
Daily Mail

Raul Jimenez, of Delray Beach, Florida, was found dead Wednesday in Alto Paraíso de Goiás, Brazil. The 30-year-old went hiking Saturday when he was swept away by a flash flood.
DELRAY BEACH, FL・13 HOURS AGO