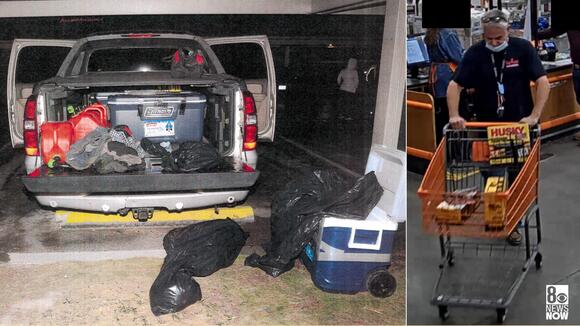 LAS VEGAS (KLAS) — A Las Vegas man who dismembered his acquaintance and drove around with a severed head and body parts will serve a minimum of nearly two decades in prison.

Eric Holland, 58, was charged with murdering Richard Miller, 65, in late December 2021. Miller was reported missing in November of that year and lived on a houseboat on Lake Mead. Holland pleaded guilty earlier this year to a charge of second-degree murder.

In court Thursday, Judge Tierra Jones sentenced Holland to a minimum of 18 years and a maximum of 45 years on the charge, which carried extra prison time for the use of a deadly weapon.

As the 8 News Now Investigators first reported, Las Vegas Metro police discovered Miller’s body parts after Holland ran from a traffic stop on Dec. 23. As officers performed an inventory of the truck Holland was driving, which is standard protocol when Metro police are impounding a vehicle, they found Miller’s severed head, they said.

During an examination of his body, the medical examiner discovered Miller had several gunshot wounds, including at least one to his head. Investigators believe Holland and Miller got into an altercation in mid-November, leading to Miller’s death.

Grand jury transcripts indicate police matched Holland’s fingerprints to the items discovered in the truck, which had been purchased at Home Depot.

A man convicted for his part in a mass shooting at a Las Vegas hookah lounge could serve a little more than a year in prison as police continue to search for other shooters involved.
LAS VEGAS, NV・22 HOURS AGO
8 News Now

LAS VEGAS (KLAS) — A man was sentenced to six years in prison with the possibility of parole after two years for hitting and killing a teenager in front of his Henderson middle school while driving almost 100 mph. There were nearly 200 people in the courthouse to support Rex Patchett, including his family and […]
HENDERSON, NV・17 HOURS AGO
8 News Now

LAS VEGAS (KLAS) — Las Vegas police are searching for a suspect accused in a business robbery on New Year’s Day. Police said it happened after the suspect entered a business near the 3800 block of East Sunset Road and pulled a gun out and demanded money from the cash register. The suspect is described […]
LAS VEGAS, NV・16 HOURS AGO
8 News Now

A man accused of threatening to shoot a woman he allegedly held against her will later struggled with police officers over his gun inside a laundromat, documents said.
NORTH LAS VEGAS, NV・20 HOURS AGO
8 News Now

Survivor, family members who died in horrific North Las Vegas crash to be honored this weekend

A family who lost seven members, including four children in a North Las Vegas crash a year ago will be honored in a special tree dedication ceremony at Craig Ranch Park as will a victim of the crash who suffered serious injuries, and survived.
NORTH LAS VEGAS, NV・2 HOURS AGO
8 News Now

Las Vegas police are searching for a missing man who may be in severe emotional distress and in need of medical assistance.
LAS VEGAS, NV・19 HOURS AGO
8 News Now

Police said a man driving a vehicle was shot twice and then crashed into a wall near the intersection. According to police, the man's injuries appeared to be non-life-threatening.
LAS VEGAS, NV・6 HOURS AGO
8 News Now

UPDATE: At around 9:45 p.m. on Tuesday, Metro police said they had taken a suspect into custody following a barricade incident in the east valley. LAS VEGAS (KLAS) — Las Vegas police investigated a barricade situation in the east valley on Tuesday evening. It took place near Mesa Vista Avenue and Mountain Vista Street just […]
LAS VEGAS, NV・1 DAY AGO
8 News Now

Shay Mikalonis, the Metro police officer who was paralyzed in a shooting on the Strip two and a half years ago, returned to visit officers at the Convention Center Area Command on Tuesday.
LAS VEGAS, NV・1 DAY AGO
8 News Now

LAS VEGAS (KLAS) — A dispute between neighbors resulted in a shooting Tuesday afternoon, according to Las Vegas police. The neighbor dispute was reported at 1:36 p.m. Tuesday in the 900 block of Doolittle Avenue, near H Street. When officers were arriving, they heard multiple gunshots, police said. Three adults were hit and taken to […]
LAS VEGAS, NV・1 DAY AGO
8 News Now

LAS VEGAS (KLAS) — An alert passenger could help prevent roadway fatalities. An important message during National Passenger Safety Week, which takes place from January 22nd through January 29th.  Tina Lavoie spoke to 8 News Now about her daughter Hillary, who was riding in the passenger’s seat when her friend lost control of the vehicle causing […]
NORTH LAS VEGAS, NV・1 DAY AGO
8 News Now

LAS VEGAS (KLAS) — A non-profit organization is giving back to the daughter of a Las Vegas Metropolitan police officer killed in the line of duty. On Tuesday, Smoking Shields, donated funds to Jada Thai, the daughter of Metro officer Troung Thai who was killed on Oct. 13, 2022, while responding to a domestic disturbance […]
LAS VEGAS, NV・1 DAY AGO
8 News Now

A deadly crash involving a pedestrian shut down traffic to drivers on the east side of the Las Vegas valley, according to police. It happened on Tuesday evening at 6:47 p.m. along north Nellis and Las Vegas boulevards.
LAS VEGAS, NV・1 DAY AGO
8 News Now

A 35-year-old man is dead after he was struck Tuesday night by a truck driven by an off-duty Las Vegas Metropolitan Police Department employee. Martin Luther King and Balzar.
LAS VEGAS, NV・1 DAY AGO
8 News Now

The National Transportation Safety Board released a preliminary report Thursday into the crash last year that killed 9 people, including several members of one family.
NORTH LAS VEGAS, NV・3 HOURS AGO
8 News Now

Is there an intersection in the Las Vegas valley that you feel is unsafe or has a high traffic volume? Here is how you can request a further study of the intersection and possibly a traffic light installed.
LAS VEGAS, NV・14 HOURS AGO
8 News Now

LAS VEGAS (KLAS) — A Washington man who raped a woman on the morning of his own wedding in Las Vegas will spend no time behind bars, according to court documents. Omar Delaney was arrested in the early morning hours of April 20, 2022, the day of his wedding, for raping a woman who had […]
LAS VEGAS, NV・2 DAYS AGO
8 News Now

LAS VEGAS (KLAS) — Henderson is making a giant step forward when it comes to crime solving. The city broke ground Tuesday on a new forensic crime lab. The 20,000-square-foot facility will be located on Sunset Road near Boulder highway. City leaders said it will give Henderson Police Department the latest industry technology for three […]
HENDERSON, NV・2 DAYS AGO