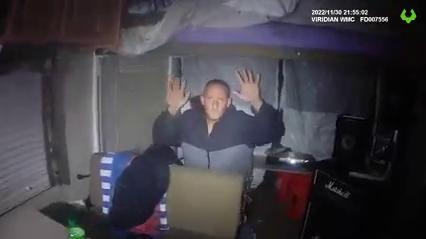 Sanders, 37, was taken into custody Wednesday afternoon in Pahrump after deputies from the Sheriff’s office found evidence linked to the crimes in a house on Oakridge Avenue. Sanders was not found in the home, where one of his relatives lives, but was arrested a few hours later by deputies with the assistance of the U.S. Marshals Service.

“We searched that initially and the victim’s stuff wasn’t there, but it was there yesterday which means he had been back to that house at some point,” Capt. David Boruchowitz with Nye County Sheriff’s Office said.

Investigators received a tip that Sanders had been staying with Jennifer Lamar, 55 of Pahrump, who was described as a female friend of Sanders. When deputies arrived, they found Sanders in a travel trailer on a property near Elderberry Street and Pahrump Valley Boulevard in Pahrump.

Lamar, who owns the travel trailer, was arrested on a felony “failing to appear” warrant and booked into the Nye County Detention Center where she will face additional charges for allegedly harboring Sanders at her home, deputies say.

Police were looking for Sanders since Tuesday, Nov. 22, when the victim, who had been left for dead, in an abandoned RV escaped and went to a nearby home for help, the Nye County Sheriff’s Office said.

The elderly woman had been taken from her own home by force several hours earlier and suffered “repeated brutal attacks” allegedly committed by Sanders and his accomplice, 31-year-old Richard Duncan, who was taken into custody on Nov. 26. The NCSO said it does not believe this was a random attack but instead a revenge attack because there is a link between Sanders and a family member of the victim.

“A family member had a business dealing with the suspect and that went south and this was some sort of revenge for that,” Boruchowitz said.

Sanders’ 13-year-old son who has been living with him was found safe and turned over to the state’s division of Child Family Services.

Sanders is facing the following charges:

Duncan is facing the following charges:

LAS VEGAS (KLAS) — An ex-Las Vegas Metropolitan police officer will spend one year behind bars for choking and beating his stepson in 2020, a judge ruled Tuesday. John Woodruff, 32, was sentenced on two counts of child abuse, neglect or endangerment. He received a suspended sentence of 28 to 72 months behind bars and […]
LAS VEGAS, NV・1 DAY AGO
8 News Now

LAS VEGAS (KLAS) — The Clark County School District Police are claiming there was an attempt to cover up what they call “failings” at a Las Vegas elementary school. According to a police report 8 News Now obtained, it began after a special education teacher was accused of child abuse. Yet, authorities determined an effort […]
LAS VEGAS, NV・10 HOURS AGO
8 News Now

The driver facing a DUI charge, who was rescued from a fiery crash on the Las Vegas Strip, appeared to be revving the car's engine, causing the tires to spin and the vehicle to catch fire, documents obtained Thursday said.
LAS VEGAS, NV・13 HOURS AGO
8 News Now

LAS VEGAS (KLAS) — The trial for ex-Public Administrator Robert Telles, who is accused of killing Las Vegas investigative reporter Jeff German last year, was pushed back several months, a judge ruled Wednesday. Telles, 46, was scheduled to go to trial on April 17 after pleading not guilty to a murder charge last October. The […]
LAS VEGAS, NV・1 DAY AGO
8 News Now

LAS VEGAS (KLAS) — Police investigated a barricade incident after a robbery suspect was located in the central valley. It happened near Washington Avenue and Twin Lakes Drive near Lorenzi Park on Wednesday night. Metro police called in the SWAT team to investigate the incident. Evacuations in the area are taking place as a precaution, […]
LAS VEGAS, NV・1 DAY AGO
8 News Now

Police officers running a records check on a man attempting to urinate on the Las Vegas Strip later learned he was wanted for murder, the 8 News Now Investigators have learned.
LAS VEGAS, NV・1 DAY AGO
8 News Now

LAS VEGAS (KLAS) — Police have arrested a man after a deadly apartment shooting involving his girlfriend in Downtown Las Vegas on Tuesday. Jesus Navarrette, 23, was arrested at the scene and booked for open murder and outstanding warrants, police said. The incident occurred at approximately 5:38 p.m. after officers with the Las Vegas Metropolitan […]
LAS VEGAS, NV・1 DAY AGO
8 News Now

Videos the 8 News Now Investigators obtained show a serial kidnapping suspect appearing in a Las Vegas courtroom before he was released for credit for time served. He later tortured a woman and killed two men.
LAS VEGAS, NV・10 HOURS AGO
8 News Now

LAS VEGAS (KLAS) — Las Vegas police said they suspect foul play after a woman was found dead inside a residence in the central valley over the weekend. The woman, identified as 56-year-old Shirley Williams, was found strangled to death in a bedroom, according to the Clark County coroner’s office. Williams was discovered around 10 […]
LAS VEGAS, NV・2 DAYS AGO
8 News Now

A courtroom outburst by a man accused of telephoning threats to “shoot up” a Southern Nevada synagogue prompted a judge to increase his bail on Wednesday, despite the man’s father’s account that his son is a military veteran with “a mental issue” resulting from head injuries.
LAS VEGAS, NV・1 DAY AGO
8 News Now

A nationwide manhunt ended Tuesday night after a man with ties to Las Vegas died of a self-inflicted gunshot wound after a standoff with police in Grants Pass, Oregon.
GRANTS PASS, OR・2 DAYS AGO
8 News Now

Metro officer Derek Stebbins had to act fast to get an unresponsive driver out of a car as it burst into flames on the Las Vegas Strip Friday.
LAS VEGAS, NV・2 DAYS AGO
8 News Now

LAS VEGAS (KLAS) — Police were called to investigate a homicide in the downtown Las Vegas area on Tuesday night after a report that a woman had been shot. The incident occurred at 1000 block of South 3rd Street, near Charleston and Las Vegas boulevards. Police received a call from a man in his 20s […]
LAS VEGAS, NV・2 DAYS AGO
8 News Now

LAS VEGAS (KLAS) — Police are asking for the public’s help in finding a missing man who was last seen on Saturday in downtown Las Vegas. Collin Best, 26, was last seen Jan. 28 near the 300 block of S. Casino Center Blvd, near Main Street and Ogden Avenue. He was wearing a red jacket, […]
LAS VEGAS, NV・1 DAY AGO
8 News Now

Teen files lawsuit against CCSD and parents for bullying

LAS VEGAS (KLAS) — A former student of the Clark County School District is suing the district for allegedly failing to protect him from bullying. He’s also suing the parents of the students who he claims bullied him. The victim’s attorney, Jacob Leavitt, told 8 News Now that going after the parents is a way […]
CLARK COUNTY, NV・1 DAY AGO