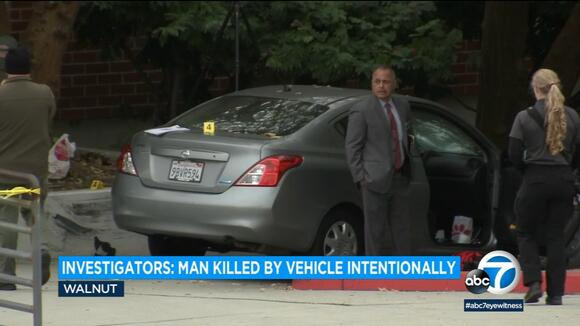 An employee of Mt. San Antonio College was struck by a vehicle and killed Thursday morning at the campus in Walnut in what authorities described as an apparently "intentional act." The man in his 60s was pronounced dead at the scene in the 1100 block of North Grand Avenue shortly after 7:30 a.m., according to the Los Angeles County Sheriff's Department. Deputies arrived to find the victim unresponsive and suffering from trauma, according to a news release. He was pronounced dead by responding firefighter-paramedics. The driver of the vehicle was transported to a hospital where he was treated for unspecified injuries and is in stable condition. He was detained by authorities. 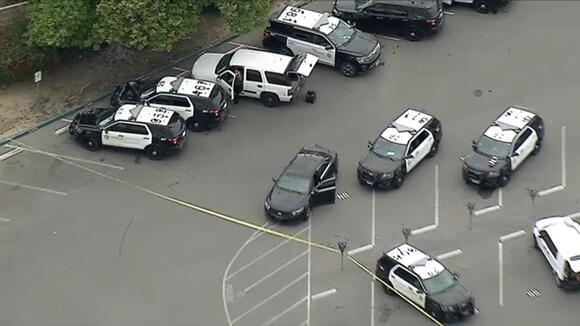 A man was struck by a vehicle and killed at Mt. San Antonio College in Walnut in what authorities described as an apparently "intentional act."

"The traffic collision appears to be an intentional act," the Sheriff's Department statement said. The driver was only identified as a man in his 30s. The names of the victim and driver were not released. Their relationship to one another is unclear. Anyone with information about the incident is to call the sheriff's Homicide Bureau at (323) 890-5500.

Video of a driver defending his rights as he denied a Costa Mesa police officer access to a vehicle for a search has gone viral on social media.
COSTA MESA, CA・1 DAY AGO
ABC7

The man who disarmed the Monterey Park mass shooter less than half an hour after the massacre is set to receive a special honor for his actions.
ALHAMBRA, CA・2 DAYS AGO
ABC7

A couple in Arcadia is selling doughnuts to raise money for the victims of the Monterey Park mass shooting. It's an effort to honor the victims, including one who was very close to the couple.
MONTEREY PARK, CA・2 DAYS AGO
ABC7

A driver was taken into custody after leading authorities on a high-speed chase from Long Beach through Orange County Thursday.
ORANGE COUNTY, CA・2 DAYS AGO
ABC7

A chase involving a motorcyclist ended with a dramatic takedown Thursday night in the streets of Compton.
COMPTON, CA・2 DAYS AGO
ABC7

A man armed with a gun was shot and killed by a Los Angeles County sheriff's deputy while a search warrant was being served at a home in Maywood, authorities said.
MAYWOOD, CA・2 DAYS AGO
ABC7

One person was rushed to the hospital with injuries after an explosion occurred on the University of Southern California campus Thursday afternoon, authorities said.
LOS ANGELES, CA・2 DAYS AGO
ABC7

A man suspected of arson was taken into custody Thursday afternoon after a massive and intense fire broke out at an apartment building in the Westlake District.
LOS ANGELES, CA・2 DAYS AGO
ABC7

Monterey Park Chief Scott Wiese defended his decision not to warn the public for hours that a killer was on the loose, saying he didn't have enough information to effectively alert residents.
MONTEREY PARK, CA・3 DAYS AGO
ABC7

Family and friends honored Elliot Blair, an Orange County lawyer who died on vacation in Mexico, during a vigil Thursday night, as questions remain about the circumstances of his death.
ORANGE COUNTY, CA・1 DAY AGO
ABC7

Activists took to the streets of Los Angeles to protest police brutality after the release of video showing the fatal beating of Tyre Nichols at the hands of former Memphis police officers.
LOS ANGELES, CA・1 DAY AGO
ABC7

A radio-collared mountain lion known as P-81 was found dead on Pacific Coast Highway in the western Santa Monica Mountains after likely being struck by a vehicle.
SANTA MONICA, CA・1 DAY AGO
ABC7

Police said the assault weapon that was used in the attack is uncommon and was one of several high-power guns in Huu Can Tran's possession that night.
ALHAMBRA, CA・4 DAYS AGO
ABC7

Lost in the aftermath of the Monterey Park ballroom dance hall shooting that left 11 people dead is an alarming fact: It took five hours for authorities to alert the public that the gunman was on the loose.
MONTEREY PARK, CA・4 DAYS AGO
ABC7

Authorities have arrested a suspect allegedly seen in a video crashing a dump truck into his estranged wife's home in South Los Angeles and smashing into parked cars on the street.
LOS ANGELES, CA・4 DAYS AGO
ABC7

The Monterey Park mass shooting has only sharpened residents' feelings about what makes the tight-knit community so special, and worth protecting.
MONTEREY PARK, CA・2 DAYS AGO
ABC7

Vice President Kamala Harris traveled to Monterey Park to meet with victims' families days after a mass shooter there killed 11 and wounded at least nine others inside a dance studio.
MONTEREY PARK, CA・3 DAYS AGO
ABC7

The cast and crew of the Oscar-nominated film "Everything Everywhere All at Once" honored the victims of the Monterey Park massacre with a touching Lunar New Year celebration at one of the city's popular restaurants.
MONTEREY PARK, CA・3 DAYS AGO