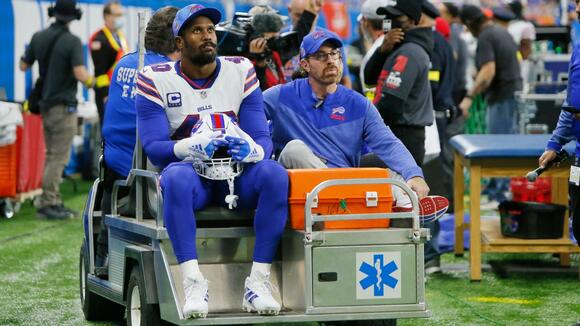 FOXBOROUGH, Mass. -- The Buffalo Bills have placed pass-rusher Von Miller on injured reserve with a knee injury, hours before the team's Thursday night game against the New England Patriots .

Miller will miss at least the next four games after suffering lateral meniscus damage to his right knee, per Miller, during the team's win over the Detroit Lions on Thanksgiving. The team's hope, per general manager Brandon Beane in a pool report, is that he will be able to return this season. Putting him on injured reserve before Thursday night's game allows it to count toward the minimum four games he must miss.

"He's been doing treatment and trying to rehab it," Beane said. "We don't want to rush him back, and he's a competitor. That's why we love him. That's why he's so great. The competitor in him -- if he could wheel it out there tonight, he would do it. We just think in talking to the medical people that the best decision right now is to give this time, and that gives him the best opportunity to help us down the stretch."

The team also elevated practice squad wide receiver John Brown to the active roster for Thursday's game. Brown re-signed with the team on Saturday. He previously was in Buffalo for the 2019 and 2020 seasons.

The Bills, who are 0-2 in the division to start the season, are beginning a three-game stretch against three AFC East opponents. The earliest Miller could return is Week 17 against the Cincinnati Bengals .

Although the defense will be without the team's sack leader in Miller for a key stretch, defensive ends AJ Epenesa and Greg Rousseau are set to make their returns from ankle injuries against the Patriots.

Miller had said on his podcast Tuesday that he was hopeful he would be able to return for the team's game against the New York Jets next week.

"I do have some lateral meniscus damage, and it's going to have to be addressed," Miller said on the podcast. "But I do feel like I can, you know, play through that, so I'm just gonna wait a little bit, and let the swelling go down for about seven to 10 days and, hopefully, right before the Jets game I will be back."

Miller ranks third in the NFL in quarterback pressures (38) behind Dallas Cowboys linebacker Micah Parsons (46) and Patriots linebacker Matthew Judon (39). No other Bills player has more than 12 pressures, with Miller's 216 pressure gap the largest in the NFL this season. Miller leads the Bills in sacks (eight), pass rush win rate (23.7%) and pressure percentage (14.6%).

"If I'm out there, you know that I'm ready to go and I feel totally confident," Miller said.

Patrick Mahomes' wife, Brittany, wants all the smoke.  Brittany, who's never been afraid to speak her mind on social media, just posted a message for the Bengals.  Hint: It's not very friendly.  "Cancun on 3," she said on Twitter.  "Cancun on 3" has become a trendy phrase in the ...
CINCINNATI, OH・2 DAYS AGO
The Comeback

After making the conference championship game for a second time in as many seasons, Cincinnati Bengals suffered a tough loss to the Kansas City Chiefs following a costly penalty in the final seconds of the game that set up a game-winning field goal for the Chiefs. It wasn’t the outcome the team had hoped for, Read more... The post Joe Burrow reacts to loss with bold message appeared first on The Comeback: Today’s Top Sports Stories & Reactions.
CINCINNATI, OH・1 DAY AGO
Whiskey Riff

It’s the sound of hearts breaking across Philadelphia and the state of Pennsylvania… and let’s be honest, everywhere else in the country, too. Eagles quarterback Jalen Hurts made a very rare public appearance with his girlfriend Bryonna “Bry” Burrows after the NFC Championship game this past Sunday, which is a surprise to many fans, as he is extremely private about his life outside of football.
PHILADELPHIA, PA・13 HOURS AGO
Athlon Sports

The Pittsburgh Steelers and Philadelphia Eagles have been in the NFL since its inception. The two teams even briefly combined forces during World War II and called themselves the Steagles. The players and coaches didn’t like it then and the two fan bases don’t like each other now. Fans from the same state rarely get along and the vitriol was on display after the Eagles made their second Super Bowl in five seasons.
PHILADELPHIA, PA・1 DAY AGO
OnlyHomers

Once again, the Dallas Cowboys failed to make a deep playoff run as they fell short losing to the San Francisco 49ers 19-12 last Sunday in the divisional round of the playoffs. The elite offense of the Dallas Cowboys sputtered and struggled, which lead to Jerry Jones and head coach Mike McCarthy to make a tough decision.
DALLAS, TX・1 DAY AGO
ESPN

An offseason trade of Aaron Rodgers remains an option for the Packers for a variety of reasons, league sources told ESPN.
GREEN BAY, WI・2 DAYS AGO
Larry Brown Sports

The Denver Broncos wanted to make a splash when hiring their next head coach, and they have done just that. Sean Payton has reached an agreement to become the head coach of the Broncos, according to multiple reports. The Broncos have agreed to a compensation package with the New Orleans Saints, who previously held Payton’s... The post Sean Payton lands head coach job appeared first on Larry Brown Sports.
DENVER, CO・8 HOURS AGO
ESPN

Sean Payton hire: Why Broncos and Saints made the deal and what to expect?

What impact will Sean Payton have for the Broncos? What's next for New Orleans? Here are the answers to the biggest questions.
DENVER, CO・3 HOURS AGO
ESPN

The Titans are replacing the grass field at Nissan Stadium with turf. They have led the NFL in players used the past two seasons because of injuries.
NASHVILLE, TN・10 HOURS AGO
ESPN

Liz Loza sifts through some of the most potentially impactful free agents and those who could be traded or cut, then provides her perfect destination for fantasy purposes.
WASHINGTON STATE・16 HOURS AGO
ESPN

Kellen Moore will no longer be the offensive coordinator of the Cowboys, ending a four-year run that saw the offense rank inside the top 10 three times.
DALLAS, TX・2 DAYS AGO
ESPN

Our experts give their instant reaction to the opening spread and total for Super Bowl LVII between the Philadelphia Eagles (14-3) and the Kansas City Chiefs (14-3).
KANSAS CITY, MO・2 DAYS AGO
ESPN