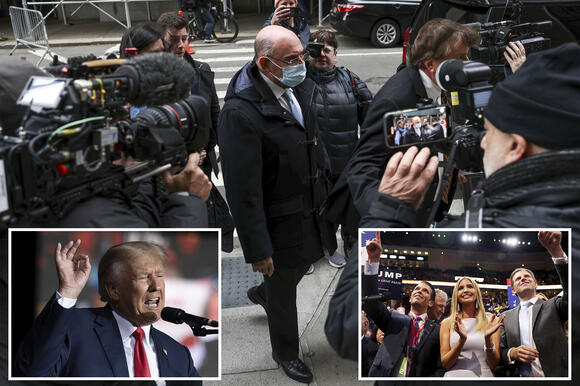 Longtime Trump Organization CFO Allen Weisselberg acted on his own — not on behalf of the former president’s company — when he raked in off-the-books benefits and evaded taxes, a lawyer for the organization told jurors Thursday.

Attorney Susan Necheles placed blame squarly on Weisselberg for prosecutors’ allegations of tax fraud at the Trump Organization in her closing argument as the trial on related charges drew to a close in Manhattan Supreme Court.

She went on: “The prosecution’s case rests on one thing: trying to convince you, the jurors, that Mr. Weisselberg’s actions were done in behalf of the company.”

“They were not. They were done solely to benefit himself . And that is the critical issue in this case,” Necheles said.

Prosecutors from the Manhattan District Attorney’s Office allege the Trump Organization ran a 15-year scheme to avoid paying taxes on perks it afforded top executives at the company.

The company could face a penalty of more than $1 million if the Manhattan jury convicts it.

Weisselberg testified at the trial after pleading guilty to a host of charges for his conduct at the company, including grand larceny, tax fraud and falsifying business records.

The longtime Trump Org exec raked in off-the-books perks such as a luxury apartment, expensive cars and his grandchildren’s school tuition that were paid for by the company.

As part of his plea deal, he agreed to testify at the trial and will spend five months in prison and receive five years of probation.

Prosecutors are scheduled to begin their closing argument Thursday afternoon and will likely tell jurors Weisselberg’s tax evasion was tethered to the Trump Organizaiton because he was a “high managerial agent” of the company.

In her opening statement, prosecutor Susan Hoffinger said the company benefited from these off-the-books perks because it didn’t have to provide Weisselberg and two other employees with bonuses and higher salaries.

“This case is about greed and cheating, cheating on taxes,” Hoffinger told jurors at the start of the trial.

“The scheme was conducted, directed and authorized at the highest levels of the accounting department at the company.”

Trump's M O is it anybody but me , take those people away they're the true criminals, for invading by Organization and stealing from the IRS . I paid my taxes all $750, OO worth.🤣🤣🤣🤣🤣

Of course he does. He would throw his own kids, wife, secret service anyone under the bus.

AOC was in a New York state of mind. The far-left Bronx and Queens lawmaker was mocked on Twitter on Thursday after she referred to being in New York twice in 10 seconds — while speaking in front of the US Capitol. The “Squad” member was among dozens of House and Senate Democrats who gathered to shame the Biden administration over its continuation of the Trump-era Title 42 border policy when she made the figurative statement. “We have governors in states across, across the country, including here in New York with, uh, Gov. Kathy Hochul, saying ‘Expand these legal pathways,’ uh, ‘Make...
2 DAYS AGO
Newsweek

Disgraced Rep. George Santos delivered his first House floor speech on Wednesday since being sworn in as a member of Congress earlier this month. The New York Republican rose to speak on the plight of Iranian protesters and acknowledge their bravery during his minute-long address. Santos also called on the Biden administration to do more than impose “mere sanctions” on the Iranian regime as punishment for its treatment of the demonstrators. “Today I rise in support of the brave Iranian protesters who are fighting against barbaric forces of immorality,” Santos began his remarks.  “During his 1967 inaugural address as governor of California, Ronald...
CALIFORNIA STATE・2 DAYS AGO
New York Post

Rep. Matt Gaetz is pushing a new bill that would restrict former House Intelligence Committee Chairman Adam Schiff’s access to classified information over his “baseless claims” of collusion between former President Donald Trump’s 2016 campaign and Russia.  The PENCIL Resolution, an apparent riff off of Trump’s derisive “Pencil-Neck” nickname for Schiff, stands for Preventing Extreme Negligence with Classified Information Licenses Resolution. It calls for Schiff (D-Calif.) not to have access to classified information, for him to be investigated by the House Ethics Committee, and to have comments he made in Congress on Russian collusion and the Trump campaign stricken from the...
CALIFORNIA STATE・1 DAY AGO
New York Post

A major donor to President Biden offered his ne’er-do-well niece a job in Los Angeles to help her get back on her feet in the summer of 2018, only for her to scoff at the $85,000 annual salary as “below minimum wage,” according to emails and text messages found on Hunter Biden’s laptop.  The drama unfolded as Caroline Biden, then 31, pleaded guilty on July 26 of that year to racking up over $100,000 in charges on a stolen credit card. She was sentenced to two years of probation, which she wanted to serve in California near her beloved cousin Hunter....
LOS ANGELES, CA・2 DAYS AGO
Reuters

WEARE, New Hampshire Jan 27 (Reuters) - When Donald Trump trounced his Republican rivals in New Hampshire's 2016 primary, the stunning win announced to other states the reality TV showman was a serious contender. Trump went on to capture the Republican nomination and then the White House.
IOWA STATE・1 DAY AGO
Newsweek

Hunter Biden apparently turned his father’s Wilmington, Del. mansion into a high-powered and possibly compromised home office, wheeling and dealing with some of the same nations whose names have turned up in classified documents recently discovered at the home, according to experts and leaked cellphone texts. Hunter Biden listed the idyllic Wilmington home as his address following his 2017 divorce from ex-wife Kathleen Buhle — even claiming he owned the three-bed, four-and-a-half-bath lakefront property on a July 2018 background check form as part of a rental application. The home is also listed as his billing address for a personal credit card...
WILMINGTON, DE・10 HOURS AGO
New York Post

The week in whoppers: The NYT’s blatant bias, Biden’s debt-ceiling switcheroo and more

This correction: We say: The Times blames Republicans for using “debt” as a “political tool,” presumably because they object to Democrats’ endless spending — which, uh …  drives up debt (and inflation). The Gray Lady could have just as easily blamed Dems for using “spending” as a political tool, since they refuse to slow the growth of outlays. But the paper takes its orders from left-wingers, who demanded the “correction.” And showed its blatant bias in the process. Flashback: “This is Jim Crow in the 21st Century.”  — President Biden, March 2021 We say: When Georgia passed its Election Integrity Act in 2021, President Biden...
NEW YORK CITY, NY・2 DAYS AGO
New York Post

The Federal Election Commission has warned that Long Island Rep. George Santos may be in more legal jeopardy over a sketchy job announcement earlier this week. The freshman Republican’s campaign said Wednesday it had replaced its longtime treasurer — only for the announced replacement, Thomas Datwyler, to deny he had ever agreed to take the job.  “It has come to the attention of the Federal Election Commission that you may have failed to include the true, correct, or complete treasurer information,” the FEC wrote in a Thursday letter to Datwyler. The agency’s missive goes on to remind the Santos campaign that “knowingly and...
1 DAY AGO
New York Post

Notebooks President Biden used during his time as vice president that may reference classified information were among the material seized by the FBI during a search of his Delaware home last week, according to a report.  The notebooks include some of the 80-year-old president’s writings related to his official White House business, such as notes on diplomatic engagements during his time as Barack Obama’s vice president, according to NBC News. While the notebooks themselves did not have classified markings, according to the report, some of Biden’s handwritten notes inside them may reference sensitive material. A person familiar with the investigation told the news...
DELAWARE STATE・22 HOURS AGO