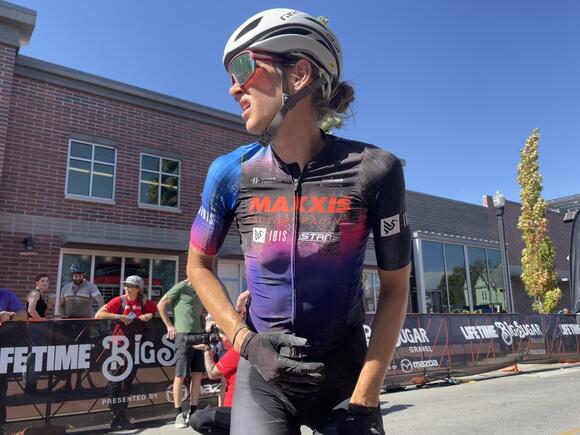 Haley Smith (Maxxis Factory Racing) secured her place on the top step of the podium and in the history books as the first pro women’s champion of the Life Time Grand Prix presented by Mazda series in October.

While she is the defending champion, Smith will still have to submit an application to race the series again, Life Time offering a one-week window for interested athletes from December 1-7. The roster will be expanded in 2023 to include 35 women and 35 men in the pro category and will be announced on December 15.

In a recent interview with Cyclingnews , Smith said winning the series was a goal but not her ‘focus’.

“Yes, I will apply again. I’m not looking to defend the title, though; that’s a backwards view. I’m looking to perform my best and try to compete for NEW wins - much more of a forward view. I’m not trying to repeat anything; every year is a new challenge,” Smith explained. “Even with the same races, no event will be exactly the same from year to year.”

The series title came with a heavy wooden trophy, and a hefty $25,000 cash prize, which was part of an overall $250,000 purse split evenly among the top 10 of each pro category. Smith said she earned a lot more than those prizes, as the six-race series helped her “find a love for bikes again”.

“My result at Big Sugar wasn’t great, but I just felt so happy after that race because of the whole year. It’s cool to win the Grand Prix, but more than that, it’s just cool to be a part of this and be a member of this community,” Smith said on the November instalment of her podcast, OffRoads InRoads , co-hosted with her husband and fellow MTB pro Andrew L’Esperance.

“And for the first time, I think I actually understand why people like to ride bikes who do it not as a career or as a means to get to the Olympics.”

The Canadian off-road professional, who earned bronze medals in mountain biking at the Commonwealth Games and World Cup circuit, adjusted to endurance gravel events quickly and pulled ahead in the rankings after the fourth event in the series, Leadville Trail 100 MTB.

She secured the overall title at Big Sugar Gravel with a 13th placing in Bentonville, Arkansas, and her 138 total points were four points better than the duo of Sofia Gomez Villafane and Sarah Sturm, who tied with 134 points. On the men’s side, Keegan Swenson dominated the series with four victories to finish 13 points ahead of Alexey Vermeulen and 18 points ahead of Russell Finsterwald. Of note for the family pursuits, L’Esperance had 111 points and was good for sixth overall.

The first two gravel races that were part of the Grand Prix - Unbound Gravel 200 and Crusher in the Tushar - were her maiden voyages in the growing off-road discipline. It was a tough way to break away from a 20-minute short track MTB event or 90-minute XCO effort. Unbound was an 11-hour monster. She finished sixth overall at Unbound for pro women, fourth best among the Grand Prix contenders.

She finished sixth overall at Unbound for pro women, fourth best among the Grand Prix contenders.

“The Unbound Gravel hangover is a very, very real thing. I ended up 6th yesterday in what was a hilariously ambitious first attempt at gravel racing. Called it ‘drop bar initiation’,” Smith said on her Instagram feed.

What worked? Smith completed her first gravel race without any flat tyres or mechanicals, which is rare at Unbound. And she went through the rest of the events unscathed by equipment challenges as well and never had to go into chase mode after a mechanical. “That’s a huge testament to mechanic Drew [Esherick],” she noted.

“This will only be my fourth gravel race ever. But I really like it,” Smith told Cyclingnews once she got to the final “rodeo” at Big Sugar. “I do a ton of training on the drop-bar bikes, probably 60% of our yearly volume. And to be honest, a mountain bike World Cup is the most chaotic thing you can do, so something like this with a mass start, it's chaotic as well. There's crashes everywhere and gravel flying, but I didn't feel overwhelmed by it.

“And I really enjoyed the little bit more relaxed culture. And I liked the longer events as well. I just like the flow of them.

“Coming from XCO World Cup and into this, it's like having new life breathed into you. You get to interact with the people you are around, and you get to appreciate the awesomeness of what you are doing with one another.”

Summer of altitude, fatigue and mud

Smith took a break after Unbound in June to prep for Crusher in the Tushar, spending three weeks with L’Esperance at altitude training in California at Big Bear Lake. She was rewarded with the victory in Utah in early July.

“It was also the only gravel event where the women got their own start. I loved that,” Smith said about Crusher in southern Utah. “It changed the flow of the race so much. It made it a lot more tactical, and I really, really enjoyed getting to race head to head on drop-bar bikes instead of being lost in a crush of men.”

Villafane was still leading as the series headed to northern Wisconsin, and Smith moved to second place.

She then went back to mountain bike pursuits with the World Cup in Andorra, Canadian Nationals and Snowshoe World Cup. Being ‘on fumes’ by August, she sat out the World Cup races in Mont-Sainte-Anne in order to rest for Leadville Trail 100 MTB. Smith went outside her comfort zone yet again at Leadville.

“I was supposed to race St. Anne. But it was the weekend before Leadville, and I was just really tired. So I made the choice to skip Sainte-Anne for the first time ever so that I could do Leadville, and it worked.

“I finished third only because I was riding in close proximity to Sarah [Sturm]. But she was taken out by a cow! So, sorry, Sarah, the cow saved my race and ruined hers a little bit. But anyways, it was an incredible experience but so hard for me.

“That was the most dead I have ever been on two wheels. The last five kilometres were so terrible.”

She then, some time back at home in Oxbridge, Ontario, began to work on her Master’s degree and mixed in a gravel stage race, Rebecca’s Private Idaho, where she won stages and the overall GC.

The final MTB event in the series was in Wisconsin. Thunderstorms hit the area just before the start, so everyone was caught on dry tyres in muddy conditions.

“Chequamegon was one of the ones that vibed with me. I just felt at home in the woods,” she noted, coming away with a third-place finish which vaulted her into the Grand Prix lead that she solidified at Big Sugar.

Back to the beginning

In 2023, the Sea Otter Classic will again serve as the lead-off event in the series, this time 20km longer at a full 100km in length on a cross-country mountain bike track in Monterey, California.

Reflecting on how the big unknowns from the first opening day in 2022, Smith said Sea Otter “ended up being the most technical race” in the series. She said the Sea Otter course was not technical by mountain bike standards but served to “separate the field right away” and distinguish which riders were most comfortable handling bikes offroad.

“Moriah [Wilson] won that race, and it is really sad that we didn’t get to see what she was capable of the rest of the year. It feels particularly odd to me to have won the series knowing that I was not able to compete against her,” Smith noted.

“In the first single track, I had just been gapped off the leading five, I guess it was, and Moriah was wearing a black kit, and I didn’t know who she was at that time. I remember being behind her in the single track and wanting to open it up a little bit more. Then as soon as  we came to a doubletrack, she absolutely dusted me.”

The longer course for the opening cross-country MTB event was a welcome change to the 2023 lineup of events for the women’s champion.

“I don’t really have a preference on distance. The more variety from race-to-race, the better,” Smith told Cyclingnews. “That said, 100km at Sea Otter will prepare me well for some other goals I’ve got later in the summer.

“It was just an awesome year. I am already excited for next year.”

‘Different things are important in my life, not only the bicycle’ says accomplished Slovakian
2 DAYS AGO
Cycling News

'It's disappointing. We came here to win, we didn't'
22 HOURS AGO
Cycling News

Marianne Vos extends with Jumbo-Visma to 2025

Goossens charges across Mallorca for victory at Trofeo Andratx