Here's What "Disenchanted" Cast Looked Like Before Starring In The Film 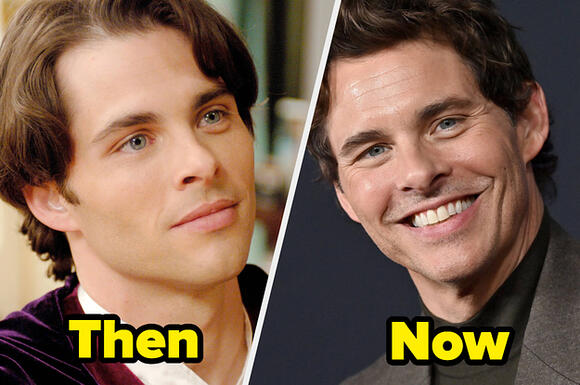 Before we had Disenchanted ...

It's been 15 years since the original debuted, and audiences finally got the long-anticipated sequel they had been waiting for.

Here's how the cast looked like then vs. now, from the Enchanted alums to the newcomers in the sequel:

She's new to the franchise, so here's what she looked like in The Conners .

She wasn't in Enchanted , so here's what she looked like in Bridesmaids .

She's also a new addition, so here's what she looked like in Community .

You didn't meet her in Enchanted , so here's what she looked like in Glee .

What did you think of Disenchanted ? Share your review in the comments!

‘Friends’: What the Twins Who Played Ross and Rachel’s Baby Emma Look Like Today

Any die-hard fan of the sitcom Friends remembers one of the most important storylines of the entire series – when Ross and Rachel had their baby girl, Emma. Although she was only in a handful of episodes, finding a baby to take the role wasn’t easy. It took two little actors to portray Emma, twins Noelle and Cali Sheldon, and they have nothing but good things to say about their first acting role. The show may have ended almost two decades ago, but that doesn’t mean that the twins have faded into the background. Here is what the Friends actors who played Ross and Rachel’s baby Emma look like today and what they’re up to.
1 DAY AGO
BuzzFeed

After Learning That Channing Tatum Is Working On A Romance Novel, I Did A Deep Dive To Find What Other Celebs Have Written Fiction, And The Results Were Pretty Dang Surprising

What does it say about me that I'm tempted to suggest several of these as future book club picks?
5 HOURS AGO
Parade

18 Implausible Things From Movies That Made Audiences Say, "That's It, I'm Out"

Still obsessed with the fact that we're expected to believe Indiana Jones survived a nuclear explosion by hiding in a refrigerator.
1 HOUR AGO
Showbiz Cheat Sheet

After 'Gunsmoke,' the actor faced health challenges that ultimately killed her. Here's Amanda Blake's cause of death and a possible reason why her friends said she died of throat cancer.
KANSAS STATE・1 DAY AGO
Distractify

Are Pauly D and Nikki Hall Still Together? Here's What to Know

It’s been a long road for Nikki Hall and Pauly D. The pair, who first met on MTV’s Double Shot at Love, were fan-favorites from the beginning. Viewers loved the chemistry the Jamaican beauty and the Jersey Shore OG had on camera, which led folks to root for their success.
2 DAYS AGO
Looper

It seems that this year's award season is not going quite as planned. On January 10, 2023, the 80th Golden Globe Awards took place to celebrate the best of film and television from the previous year. After last year's less-than-stellar show that saw the Golden Globes go for a hybrid style of part Zoom and part in-person presentation, this year's event brought things back to a more traditional and welcome manner. The prestigious ceremony saw some pretty major events take place, from Ke Huy Quan's wholesome best supporting actor win for "Everything Everywhere All At Once" to Eddie Murphy's Cecil B. DeMille Award win and subsequent speech that referenced another notable award ceremony moment.
14 DAYS AGO
Inside the Magic

Marvel Studios has remained hush on a scandalous topic that was raised at the end of 2022, but will the outcome result in the actor who plays Doctor Strange being recast in the Marvel Cinematic Universe?. Doctor Strange, portrayed by Benedict Cumberbatch since 2016’s Doctor Strange movie from director Scott...
3 DAYS AGO
EW.com

The Academy didn't recognize Tom Cruise with a Best Actor nod, but the global superstar still landed a major Oscar nomination for Top Gun: Maverick anyway. For his work as a producer on the blockbuster sequel that has grossed nearly $1.5 billion to date, the 60-year-old scored his fourth career Oscar nomination as the film appeared Tuesday morning among the Academy's 10 Best Picture nominees.
5 DAYS AGO
EW.com

The most shocking snubs and surprises of the 2023 Oscar nominations

And the Oscar nomination goes to... At last, we know who made the cut for the 2023 Academy Awards. But who was among the Oscar snubs and surprises? While the awards industry has generated robust and accurate pundit predictions, there are always at least a few shocks come nomination morning.
5 DAYS AGO
HOLAUSA

Choosing a wedding dress is probably one of the most important tasks during the planification and organization of a wedding. The dress must be in harmony with the rest of the mood of the ceremony, and represent, to the greatest extent possible, the actual style of the bride. ...
1 DAY AGO
realitytitbit.com

Dan Swygart took to Instagram to reveal he has not made Shauna Rae his girlfriend, and admitted they are “still just good friends getting to know each other.” Viewers have mixed opinions about her potential future boyfriend. As the I Am Shauna star went on a dating quest...
3 DAYS AGO
wonderwall.com

Luke Bryan is being skewered on social media after the "uncalled for" way he introduced fellow country singer Dustin Lynch at a music festival in Mexico. During his Crash My Playa 2023 festival, the "American Idol" judge attempted to joke while hyping up his pal, who was set to play a set. However, fans felt something was lost in communication after Luke's unfriendly and bizarre introduction of Dustin, which referenced STD tests, drugs and drinking.
4 DAYS AGO
BBC

Awards pundits are still picking their jaws off the floor after Tuesday's Oscar nominations. Despite enjoying a flurry of late celebrity support, many Oscar-watchers felt British actress Andrea Riseborough had too high a hill to climb to score a nomination in the highly competitive best actress category. But on Tuesday,...
5 DAYS AGO
BuzzFeed

"When I was around 10, I remember having a dream where the ground split into two. I'm used to having very vivid dreams and thought nothing of it. The next day, however, California had a 6.4 earthquake near my home."
2 DAYS AGO
Daily Mail

On Wednesday Deadline shared that an actor has been cast as the offspring of the lovebirds for a sequel to the beloved show which aired from 1993 until 2004. The lucky guy is Anders Keith.
4 DAYS AGO
Cinemablend

M. Night Shyamalan’s Knock At The Cabin Has Screened, See What People Are Saying About The Apocalyptic Thriller

The Stephen King business is still booming, with literally dozens of the horror icon’s works currently in various stages of development or production, so you may have completely forgotten about Children of the Corn reboot that shot almost three years ago. A new spin on the famous story wasn’t...
3 DAYS AGO
DoYouRemember?

Brendan Fraser recently surprised the audience at a special screening of The Mummy. A theater in London was showing the 1999 film after Brendan has been receiving a lot of praise for his newest role in The Whale. It is being called his comeback. The 54-year-old showed up to the...
2 DAYS AGO
News Breaking LIVE

The entertainment world is mourning the loss of one of their one as the star of several British hit movies and groundbreaking films has died at the age of 89, according to her family.
2 DAYS AGO