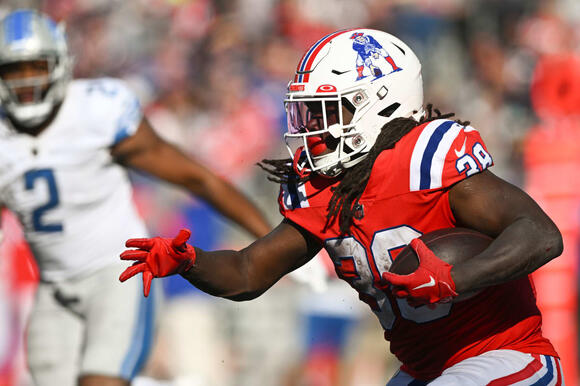 As the New England Patriots prepare to take on the Buffalo Bills in Week 13 of the 2022 season, Patriots Country highlights three players on whom Pats fans might want to keep watch.

FOXBORO — The New England Patriots are looking to remain in playoff contention as they face off against the Buffalo Bills in Week 13.

Kickoff is set for 8:15 p.m. on “Throwback Thursday” night at Gillette Stadium.

New England and Buffalo will meet for the first of two scheduled 2022 meetings. The two teams split the annual series last year with each team winning on the road. The teams met for a third time in the 2021 postseason, a 47- 17 Bills win at Highmark Stadium in Orchard Park, New York.

Though many Patriots players are expected to garner some attention during this matchup, here are three players that might raise an eyebrow when the Pats take the field against the Bills.

With Damien Harris’ thigh injury keeping him on the sidelines , Stevenson will likely be in for a significant workload. The second-year running back has amassed 680 yards with four touchdowns, while averaging 4.5 yards per carry as New England’s lead back. However, he is about to face a Bills team, which has been adept at stopping the run. Buffalo ranks seventh in the league, allowing 105.6 yards per game on the ground and ninth at 4.24 yards per carry. Pats may look to Stevenson to use his physical, powerful running style, along with his vision and athleticism to make tacklers miss in short yardage situational runs. Still, gaining an abundance of yards on the ground may be difficult. Conversely, Buffalo is having some trouble covering rushers when receiving out of the backfield. The Bills rank 20th in DVOA (per Football Outsiders) when running backs are targeted for the pass. Stevenson may be able to find some success in catch-and-run plays under the defense. The 24-year-old possesses the necessary intangibles to be an effective option as a backfield receiver, having caught 50 of 59 targets for 359 yards and one touchdown.

Though the Patriots first-round draft selection has been a solid addition at left guard, he faces perhaps his toughest test to date from a formidable Buffalo defensive front. Strange is at his best when showcasing his tenacious run-blocking. He has outstanding upper-body strength, as well as the large hands necessary to grasp defenders in pass protection. In addition to his size, he has fluid movement to mirror his opponent, as well as to recover when he struggles with a defender. However, he has seen a decrease in his productivity without Patriots center and team captain David Andrews alongside him in the interior. If Andrews makes his return from a thigh injury on Thursday night, it will greatly benefit Strange, who is expected to match with Buffalo’s defenisve tackle Ed Oliver. Oliver plays a similar style to New York Jets defensive lineman Quinnen Williams, possessing a powerful first step and the quickness to get around blocks. Strange had his difficulties with Williams in both of New England’s meetings with the Jets. With linebacker Von Miller having been ruled out, Oliver will seek to make life uncomfortable for quarterback Mac Jones. Strange’s ability to hold up in his assignments should factor prominently in the Pats’ overall success on offense.

Containing Bills’ quarterback Josh Allen is no easy task. If the Patriots are to do so, they must rely on their pass rush to play a major role. Judon leads the NFL with a career-high 13 sacks in 2022. As such, he must keep Allen from operating within a clean pocket. Still, applying pressure simply to contain Allen is a fool’s errand. When Allen is given space in the pocket, he has the choice of either extending plays with his legs, or using Buffalo’s receivers on vertical routes. Coach Bill Belichick and the Pats’ defensive brain trust may find a five-man rush to be the most effective way to keep Allen in check. Judon would join defensive end Deatrich Wise, linebacker Josh Uche and a fourth pass rusher, while Mack Wilson takes the role of spy on Allen. If Wilson can be effective in determining Allen’s escape routes from pressure, New England’s four rushers could find success in coercing the Bills’ quarterback into turnovers. Keep a close eye on Judon’s potential targeting of Buffalo’s right tackle Spencer Brown, who has struggled in pass-blocking for much of the season.

Houston recently wanted a second-round pick for Brandin Cooks - which the still-receiver-needy Dallas Cowboys at the time were pretty much willing to give. Would the New England Patriots want in to "win the deal''?
HOUSTON, TX・2 HOURS AGO
Patriot Country

No one's fully sure of Tom Brady's future, but it doesn't appear to include one of the New England Patriots' most notorious foes.
2 DAYS AGO
Patriot Country

Lynn Bowden becomes the 15th player signed to a futures deal by the Patriots prior to the start of the 2023 league year on March 15.
2 DAYS AGO
Patriot Country

Patriots Country highlights a six-pack of players on whom Pats fans might want to keep watch at this year’s Reese’s Senior Bowl in Mobile, Alabama.
MOBILE, AL・23 HOURS AGO
Patriot Country

New England Patriots boss Bill Belichick had an extended conversation with a familiar face during his team's final practice ahead of the East-West Shrine Bowl.
LAS VEGAS, NV・1 DAY AGO
Patriot Country

New England Patriots coach Bill Belichick had several conversations with one player during Day 3 of practice at the East-West Shrine Bowl. Plus, risers, fallers and additional notes and quotes from Las Vegas.
LAS VEGAS, NV・2 DAYS AGO
Patriot Country

Two players from the New England Patriots will draw significant interest this offseason when they become free agents.
2 DAYS AGO
Patriot Country

The New England Patriots receiver still managed to play in 14 games despite the multitude of injuries.
1 DAY AGO