"If I Can Do This, You Can Do This" — An American Woman Froze Her Eggs In London For 1/3 Of The Cost 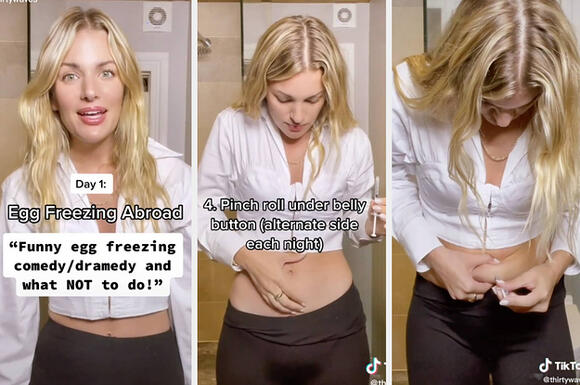 This last decade, the US has seen its slowest growth in population as people are waiting longer to have children. According to the New York Times , holding off on having a baby used to be a choice more readily accessible to those in the middle and upper class, but as the ability to seek higher education grows, so does the number of adults deciding to put their careers first.

This is amazing for individuals who want to get their lives on track before thinking about bringing a baby into the world, but it can also be daunting for anyone who faces an inner timeline. You see, the fertility rate among this group decreases after age 35, and one third of couples trying to conceive around that time face fertility issues, the Office of Women's Health reported .

According to Healthline , this can be due to a number of risks that increase with age, including having fewer eggs to work with (which exponentially decrease each year), a rising chance of miscarriage or chromosomal abnormalities, higher chances of poor health conditions that could interfere with having a healthy pregnancy, or an issue with ovaries properly releasing eggs.

So, for those who are considering starting a family later in life, planning options like freezing your eggs is something to consider. And that's exactly what 36-year-old tech marketer–turned–content creator Brittany Allyn has decided to do, and she's been documenting the entire experience on TikTok.

Brittany is an avid traveler, single, and told BuzzFeed that she's spent her early 30s enjoying independence. "I’m in this new-age group of women that has chosen to not get married or have kids by 30," she said.

Now, looking toward the future and knowing she sees kids as a strong possibility, freezing her eggs seemed like the best step.

"Egg freezing is an option for those that think they want to have children one day but aren’t ready right now," Brittany said. "I think it’s such a special opportunity our generation has that allows us to take back some control in our fertility."

"I wanted to [freeze my eggs] to have more peace of mind and almost a form of 'insurance' for having a baby down the road," she said.

"Plus...I always say egg freezing is a good option for your SECOND kid. I think I’ll be able to have a kid naturally by 40, but might need help in my early 40s if I decide to have a second."

There is a twist to her story, though, and that's the fact that Brittany froze her eggs abroad. "I'm heading to London to freeze my eggs for one third of the cost," Brittany said in the first video of her series on the process.

And she's not an exaggerating — in the US, freezing your eggs is expensive.

To start, patients are required to take hormones for 10 to 14 days via a self-injection that will stimulate their ovaries into making multiple eggs instead of the usual one released during menstruation. Throughout this time, their doctor will monitor their progress with blood tests, ultrasounds, and other methods nearly daily.

When the eggs are ready for retrieval, the patient is sedated and a needle travels through the vagina and into a follicle (where the eggs are housed). At the tip of the needle is a suction device that collects the eggs.

Immediately afterward, the eggs are kept in subzero temperatures, where they will remain until the patient is ready to use them.

This does not include future costs of vitro fertilization if or when you decide to use your eggs later on, which can cost around $18,000.

To learn more about insurance coverage for egg retrieval and IVF, BuzzFeed reached out to KindBody , a fertility and wellness clinic with locations across the US, who shared that many companies have begun adopting insurance services that include fertility benefits.

"Benefits including fertility preservation have become a key part of employer benefits packages because they help attract and retain talent, support DEI objectives, and save on healthcare costs," KindBody spokesperson Margaret Ryan told us.

However, this adoption does not appear to be wide enough. According to medical nonprofit KFF , "Many fertility treatments are not considered 'medically necessary' by insurance companies, so they are not typically covered by private insurance plans or Medicaid programs...[and] most patients pay out of pocket for fertility treatment."

In New York City, where Brittany is based, she would have been expected to shell out around $17,000 out of pocket. However, in London, the average cost is between £4,000–£6,000, which is about $4,146–$6,218 in US dollars — about one third the cost. So, after a year's worth of research into reputable clinics and doctors she'd like to work with, the 36-year-old bought a $500 ticket to London with her remote job and started the process.

"In all, including medication, retrieval, and storage, [my total is] around $5,000," Brittany said.

To further save on costs, Brittany has known people who swap apartments with others abroad or split an Airbnb with a friend. For her, though, staying at a friend of a friend's apartment worked best.

In coordination with documenting the process, Brittany has also been sharing tips and mistakes she hopes others can learn from.

Among these suggestions includes arriving a few days before your period, just in case it arrives early, since the egg freezing process typically begins on the second day of menstruation.

Similarly, she suggests staying a few days after retrieval to recover. According to the Pacific Fertility Center , patients are usually discharged two hours after egg retrieval, and many return to their regular schedule within two days .

Notably, any eggs retrieved during Brittany's process will have to remain in London. If or when she decides to use them, Brittany will have to either pay around $1,000 to $6,000 for shipment to the US or return to London — costs she says are worth it, as it still brings her in far under the US total.

The 36-year-old's candidness when it comes to her journey has inspired many viewers who also wish to have a baby one day, just not now. "If I can do this, you can do this. [And] I'm going to do it myself to show that women can do this by themselves," Brittany said in one video, which prompted an outpouring of appreciation.

"Thank you for sharing your journey!" one person wrote. "I would love to do this and your videos are giving me hope."

"I hope my story can show another option to take control of your fertility at a fraction of the cost," Brittany concluded.

Okay, I Seriously Can't Stop Laughing At All These Ignorant Americans Who've Gotten Absolutely Roasted Into Oblivion So Far This Year

We gotta get it together, my fellow Americans.
GEORGIA STATE・6 HOURS AGO
Yana Bostongirl

A Child Born With 2 Heads, One Atop the Other, Had a Condition Caused by an Extremely Rare Type of Parasitic Twinning

When the two-headed baby was born in a village in India in 1783, the sight of it frightened the midwife so much that she immediately tried to kill the baby. However, the baby was rescued from the fire into which it was thrown with minor burn injuries.
19 HOURS AGO
Business Insider

China's Foreign Ministry said the craft was a lost civilian balloon, the same explanation it gave for a suspected spy balloon that drifted over the US.
NORTH CAROLINA STATE・1 DAY AGO
BuzzFeed

"They Asked Why I Was Leaving And I Just Said Her Name": People Share Why Their Whole Staff Mass Quit A Job

"A coworker, whose brother owned the business and no one liked, got promoted to supervisor. It took him about 20 minutes before he started abusing his power."
2 DAYS AGO
BBC

The sheer scale of the devastation of the earthquake and its aftershocks can be seen in social media photos and videos posted by people in Turkey and Syria. Eyewitnesses have also been speaking about what happened. BBC News has been pulling together and verifying information. The tremors of the main...
1 DAY AGO
CNN

Former CIA and FBI official Phil Mudd discusses whether the US overreacted to the suspected Chinese spy balloon that hovered over the nation for days before the US military shot it down.
2 DAYS AGO
BuzzFeed

Black People In Interracial Relationships, Tell Us What You're Sick Of Hearing

We wanna know.
7 HOURS AGO
BuzzFeed

"The interviewer tried to convince me to lowball myself after I said what I’d accept as a minimum salary. 'If we pay you that, you wouldn’t get a bonus at the end of the year, and you’d be really upset when everyone else got one.'"
2 DAYS AGO
BuzzFeed

Women Are Sharing All The Things That Actually AREN'T Made For Us At All, And The List Is Infuriatingly Long

We just accept that our seatbelts slide up and dig into our necks, and honestly, we shouldn't.
2 DAYS AGO
BuzzFeed

Are You A Parent? Tell Us The Most Important Yet Not Discussed Tip Every First-Time Parent Should Know

Whether it's a tip, a habit, or a random piece of advice that isn't discussed enough in the parenting world, we want to know to help all new parents as much as possible.
18 HOURS AGO
BuzzFeed

"Manager asked us to share something difficult about our childhoods for 'team bonding.' What ensued was deeply uncomfortable."
9 HOURS AGO
BuzzFeed

Tell Me The "Missed Connection" You Still Think About, And I'll Draw It

The heart remembers what it couldn't have.
22 MINUTES AGO
BuzzFeed

Cruise Ship Workers, Tell Us The Most Shocking Secrets And Stories From Your Job

What REALLY happens below deck?
1 DAY AGO