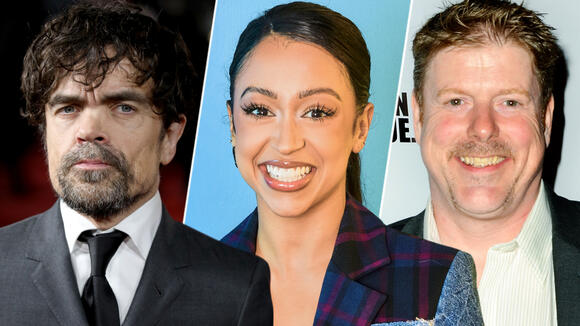 EXCLUSIVE: A slew have just boarded Paramount ’s upcoming Transformers: Rise of the Beasts including Peter Dinklage (as the voice of Scourge), Liza Koshy (as the voice of Arcee), John DiMaggio (as the voice of Stratosphere), David Sobolov (as Rhinox/Battletrap), Michaela Jaé Rodriguez (as Nightbird), Cristo Fernández (as Wheeljack), and Tobe Nwigwe (as Reek).

The screenplay is by Joby Harold, Darnell Metayer & Josh Peters, and Erich Hoeber & Jon Hoeber, with story by Harold. The new movie will take audiences on a ‘90s globetrotting adventure with the Autobots and introduce a whole new breed of Transformer – the Maximals – to the existing battle on earth between Autobots and Decepticons.

Dinklage is the 4x Emmy winning drama supporting actor of HBO’s hit Game of Thrones. He starred in MGM’s musical last year, Cyrano, from Joe Wright. Other feature credits include Avengers: Infinity War, Three Billboards Outside Ebbing Missouri, The Boss, and Pixels among others.

DiMaggio has starred on AppleTV+’s Mythic Quest, and AMC’s Better Call Saul, Anne Rice’s Interview With the Vampire, and is a voiceover actor on several projects including Futurama, Disenchatment, The Loud House, Ben 10 and Adventure Time.

Sobolov voiced Blitzwing in Paramount’s Bumblebee, as well as provided voices on The Guardians of the Galaxy animated series, Ben 10, What If? among many others.

Fernandez stars as Dani Rojas on Ted Lasso, in the movie Creatures and the $1.9 billion grossing movie, Spider-Man: No Way Home.

Rapper Nwigwe co-stars in the Netflix television series Mo and received a nomination for Best New Artist at the 65th Grammy Awards.

The new trailer is below:

Matthew McConaughy has been tapped to voice the iconic King of Rock ‘n’Roll, Elvis Presley, in Agent Elvis (fka Elvis King) an adult animated series about the King himself. McConaughey also will executive produce the series, which hails from Priscilla Presley and John Eddie, Sony Pictures Animation, Authentic Brands Group and Titmouse. McConaughy’s Elvis is a global superstar by day, ass-kicking vigilante by night who eventually joins the secret agency “TCB” as Agent Elvis.  Co-created by Priscilla Presley and John Eddie, in Agent Elvis, Elvis Presley trades in his jumpsuit for a jet pack when he is covertly inducted into...
TEXAS STATE・17 HOURS AGO
Deadline

Liam Neeson is opening up about if he would make a return to Star Wars or the DC Universe. The Northern Ireland-born actor was part of the prequel Star Wars trilogy where he played Qui-Gon Jinn starting with Star Wars: Episode 1 – The Phantom Menace. With Disney and Disney+ creating a whole universe around those characters, a fan recently asked Neeson if he would “pop up in a spinoff prequel.” “No. Star Wars, no,” he answered the fan during a Men’s Health interview. “As much as I admire them… There’s just so many of them now. So I’ve lost track,...
TEXAS STATE・2 DAYS AGO
Deadline

Actor-turned-filmmaker Alex Winter (Showbiz Kids) has set the murder mystery The Adults, starring Evan Rachel Wood (Westworld), Josh Gad (Avenue 5) and Anthony Carrigan (Barry), as his next project behind the camera, with plans to also act in the pic. The film penned by novelist Michael M.B. Galvin — who has previously adapted his own works Fat Kid Rules the World and Freak Talks About Sex for the big screen — follows siblings Megan (Wood) and Nathan (Gad), who are barely hanging on in present-day America, like all of us. Their lives are completely upended when they discover a dead body,...
15 HOURS AGO
Deadline

‘The Backrooms’ Horror Film Based On Viral Shorts By 17-Year-Old Kane Parsons In Works At A24, Atomic Monster, Chernin & 21 Laps

EXCLUSIVE: Over the last year, director and VFX artist Kane Parsons has shot his YouTube following into the stratosphere with the viral success of his mysterious short, “The Backrooms (Found Footage).” It’s the first in a series of found-footage horror videos which have thus far garnered nearly 100 million views and will now be adapted for the big screen by A24, Atomic Monster, Chernin Entertainment and 21 Laps. Parsons — who’s just 17 years old — will direct from a script by Roberto Patino (DMZ). He’ll just have to wait till his summer vacation. Details as to the plot of the sci-fi...
TEXAS STATE・17 HOURS AGO
Deadline

The BBC has been forced to apologize after an image of Viola Davis from January’s Golden Globes was shown on its news channel with a headline identifying the Oscar winner as history-maker Beyoncé. BBC News’ rolling coverage of the Grammys included a few seconds period when the image of Davis was matched with the caption “Beyoncé’s Big Night,” before the segment moved on to the next image. BBC News has in the past hour apologized via a Twitter statement and said the error “fell below the BBC’s usual standards.” “We apologise for the mistake last night when our news channels briefly showed a...
TEXAS STATE・19 HOURS AGO
DoYouRemember?

The 2023 Grammys kicked off on Sunday, February 5, starring musical artists celebrating musical artists. Several very recognizable names saw their work honored, including Ozzy Osbourne, who took whom two awards that night. But viewers found themselves distracted by Madonna‘s face when the “Like a Prayer” singer took the stage for a special introduction.
LOS ANGELES, CA・17 HOURS AGO
Showbiz Cheat Sheet

Festus Haggen actor Ken Curtis almost returned for 'Gunsmoke: Return to Dodge,' but it never happened because of a serious argument with the producer.
12 HOURS AGO
Deadline

Viola Davis has joined the coveted circle of those who have won an Emmy, Oscar, Tony and Grammy, picking up the “G” in the “EGOT” title today as part of the pre-telecast for the 65th annual Grammy Awards. Davis earned the Grammy for her audiobook memoir, Finding Me. “It has just been such a journey,” Davis said while accepting the award. “I just EGOT!” Only 18 people have achieved the status, and Davis is the fourth Black person alongside Whoopi Goldberg, John Legend, and Jennifer Hudson to win all four.  Davis already has an Oscar, two Tony’s and an Emmy. “I wrote this...
TEXAS STATE・1 DAY AGO
RadarOnline

Kevin Costner’s Yellowstone will be coming to an end and the actor’s future with the show is up in the air, RadarOnline.com has learned. Earlier today, Deadline broke the story, Paramount + and Yellowstone creator Taylor Sheridan have come up with a plan to end Yellowstone. The parties have decided to launch a Matthew McConaughey-lead spin-off which will continue with the majority of the cast. Sources revealed that Costner has been refusing to commit to a lengthy shooting schedule. Deadline said that Costner originally had agreed to 65 days of shooting for the show. However, for the first part of...
9 HOURS AGO
Deadline

Kim Petras marked her win for Best Pop Duo/Group Performance with Sam Smith by reminding folks how she trailblazed her way to the Grammy stage. “Sam graciously wanted me to accept this award because I’m the first transgender woman to win this award,” she announced from stage to huge applause. Related Story Grammy Awards Winners List – Updating Live Related Story Trevor Noah Opens Grammys With A Dig At Los Angeles; Introduces The Rock To Big Fan Adele Related Story Viola Davis Now An 'EGOT' After Grammy Win Smith then encouraged folks to keep standing up for his partner on “Unholy.” This is Smith’s first Grammy win...
1 DAY AGO
Deadline

Elon Musk continues to look for ways to make Twitter profitable and make back his investment. The new strategy takes aim at businesses and their brands on the social media platform. Well-known brands received a golden checkmark to distinguish them from the blue checkmarks, which now means they are subscribers of Twitter Blue. The gold checkmark meant that Twitter “verified” the business as legitimate. However, with the change, if brands want to keep their golden checkmark they will have to pay $1,000 a month, according to a report from The Information. Social media expert Matt Navarra shared a screenshot of an alleged e-mail...
TEXAS STATE・2 DAYS AGO
Deadline