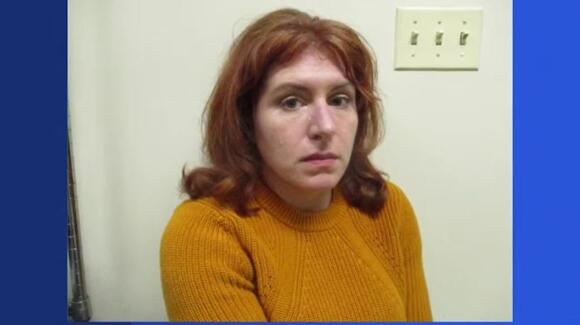 A Mahwah woman has been arrested and charged with firearm-related offenses after shooting at her former neighbor’s car in Waldwick Wednesday morning, police say.

Ring doorbell footage from a neighbor appears to show her walking down the sidewalk before firing off several rounds that morning.

Dzugay was taken into custody Wednesday evening at her Mahwah home, police say. She is charged with unlawful possession of a handgun, possession of a weapon for an unlawful purpose and criminal mischief resulting in property damage.

“Waldwick is a great community. One thing about it is that we're all from here, we grew up here and we live here. Our neighbors stick together during times like this. We received several phone calls from neighbors. Everybody offering to help. Lots of surveillance video and Ring doorbell cameras. It helped us make quick work of the case,” said Lt. Troy Seifert.

Police say they have never been called to the neighborhood before and that there was no prior criminal record for Dzugay.

The motive for the shooting is still under investigation.

gotta love the cop playing the safe neighborhood angle. Just tell us what happened without the brainwashing.

Nassau police responded to Merrick Avenue and Broadcast Plaza where the 31-year-old man was lying on the ground with multiple stab wounds.
MERRICK, NY・22 HOURS AGO
News 12

Authorities released 911 calls made by 7-Eleven employees who locked themselves in a bathroom during a robbery.
FAIR LAWN, NJ・1 DAY AGO
News 12

News 12 was told the men were stabbed in the leg, chest and arm.
NEW YORK CITY, NY・1 DAY AGO
News 12

The three inside allegedly stole $200 from the register, a cellphone and other unknown products.
NEW YORK CITY, NY・1 DAY AGO
News 12

Lozada says it went right passed her refrigerator, where she and her daughters could easily have been standing nearby.
BRIDGEPORT, CT・3 HOURS AGO
News 12

Police say Sargunvir Sondhi was driving a Mercedes Benz eastbound around 5 a.m. when he smashed the back of a Nissan Sentra near Exit 51, causing the Mercedes to flip over.
DIX HILLS, NY・1 DAY AGO
News 12

Authorities say a 32-year-old woman was driving northbound on Wicks Road around 6:30 p.m. when she hit a pedestrian in the roadway at the intersection of Merill Street.
BRENTWOOD, NY・1 DAY AGO
News 12

Authorities say the 34-year-old victim was shot in the leg and torso following a verbal dispute.
NEW YORK CITY, NY・1 DAY AGO
News 12

A 15-year-old boy has been taken into custody after a shooting on Wednesday in Linden.
LINDEN, NJ・2 DAYS AGO
News 12

The 7-Eleven on Route 4 in Elmwood Park was the latest location to be hit. It happened Wednesday night.
ELMWOOD PARK, NJ・2 DAYS AGO
News 12

A school bus crashed into a home in West Caldwell near Terrace Place and Passaic Avenue.
WEST CALDWELL, NJ・2 DAYS AGO
News 12

Authorities say the police officers were attempting to make a traffic stop when they collided with another car carrying a 29-year-old man, a 29-year-old woman and a 6-year-old boy.
NEW YORK CITY, NY・1 DAY AGO
News 12

Javier Medina, of Stony Point, was charged in the fatal shooting of 47-year-old Jason Cowell, of Garnerville.
STONY POINT, NY・1 DAY AGO
News 12

April Barron, of Bridgeport, says she will never forget the experience of seeing 27-year-old Lamar Nalley, of Hamden, being sentenced in court.
BRIDGEPORT, CT・1 DAY AGO
News 12

Police departments in the Hudson Valley are increasing patrols this weekend following the release of the body camera footage from the arrest of Tyre Nichols. Police and government officials hope for peace this weekend as people viewed the violent footage. The police departments, like the one in White Plains, are...
WHITE PLAINS, NY・1 DAY AGO
News 12

Authorities are asking for the public’s help identifying the driver of a hit-and-run crash that left a 49-year-old woman critically injured in Secaucus.
SECAUCUS, NJ・2 DAYS AGO
News 12