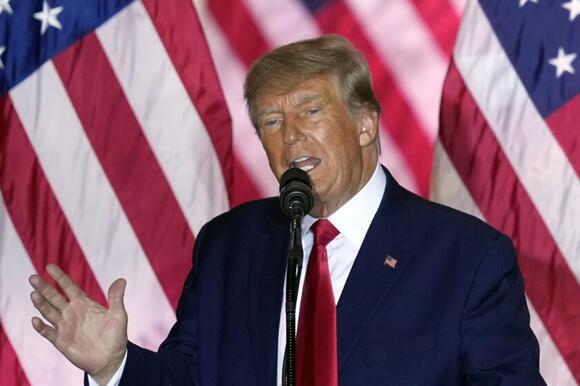 Donald Trump “knew exactly what was going on” with top Trump Organization executives who schemed for years to dodge taxes on company-paid perks, a prosecutor said Thursday, challenging defense claims that the former president was unaware of the plot at the heart of the company's tax fraud case .

Manhattan prosecutor Joshua Steinglass lobbed the bombshell allegation during closing arguments. He promised to share more details when he resumes on Friday, buoyed by the judge’s decision to grant prosecutors permission to veer into territory that had been considered off-limits because Trump is not on trial.

The tax fraud case is the only trial to arise from the three-year investigation of Trump and his business practices by the Manhattan district attorney’s office. Thursday’s closing arguments were the last chance for prosecutors and defense lawyers to sway jurors before they deliberate next week.

Judge Juan Manuel Merchan, overruling a defense objection after the jury had left court, said the company's lawyers opened the door by asserting in their closing arguments that Trump was ignorant of the scheme, hatched by his longtime finance chief just steps from his Trump Tower office.

“It was the defense who invoked the name Donald Trump numerous times," Merchan said, setting up a potentially explosive final day of arguments before jurors deliberate next week.

Prosecutors had given mixed signals about Trump’s importance to the case, telling a judge early on, “this case is not about Donald Trump,” but then repeatedly asking witnesses about him; showing a witness copies of Trump's tax returns and, ultimately, seeking to connect the dots to him in closing arguments.

Trump has denied any knowledge of the scheme, writing Tuesday on his Truth Social platform: “There was no gain for ‘Trump,’ and we had no knowledge of it.”

Steinglass said the Trump Organization “cultivated a culture of fraud and deception” by lavishing luxe perks on executives and falsifying records to hide the compensation.

Steinglass' at-times fiery summation followed defense arguments that sought to focus blame for the fraud on Allen Weisselberg, the senior adviser and ex-CFO who has admitted scheming to avoid paying personal income taxes on a company-paid apartment, luxury cars and other goodies.

The Trump Organization — the entity through which Trump manages his real estate holdings and other ventures — is accused of helping Weisselberg and other executives avoid paying income taxes on company-paid perks.

Steinglass argued that the Trump Organization — through its subsidiaries Trump Corp. and Trump Payroll Corp. — is liable because Weisselberg and an underling he worked with, controller Jeffrey McConney, were “high managerial” agents entrusted to act on behalf of the company and its various entities.

If convicted, the Trump Organization could be fined more than $1 million. Manhattan District Attorney Alvin Bragg, who watched Steinglass’ closing from the courtroom gallery, has said that his office’s investigation of Trump is “active and ongoing,” and that no decision has been made on whether to charge him.

But company lawyers argued that Weisselberg was only intending to benefit himself with his tax-dodge scheme, not the Trump Organization, and that the company shouldn’t be blamed for his transgressions.

“We are here today for one reason and one reason only: the greed of Allen Weisselberg,” Trump Organization lawyer Susan Necheles said, her remarks accompanied at one point by the wail of a siren from an emergency vehicle outside.

Weisselberg pleaded guilty in August to dodging taxes on $1.7 million in extras and testified against the Trump Organization in exchange for a promised sentence of five months in jail.

Weisselberg has worked for Trump's family for nearly 50 years, starting as an accountant for his real estate-developer father Fred Trump in 1973 before joining Donald Trump’s company in 1986.

“Along the way, he messed up. He got greedy. Once he got started, it was difficult for him to stop,” Necheles said.

Necheles argued that the case against the company is tenuous and that the 1965 state law underlying some of the charges requires prosecutors to show Weisselberg intended to benefit the company, not just himself.

Weisselberg testified that he conspired to hide his perks with McConney by adjusting payroll records to deduct their cost from his salary.

The arrangement reduced Weisselberg’s tax liability, while also saving the company money because it didn’t have to give him a hefty raise to cover the cost of the perks and additional income taxes he would have incurred.

“I knew in my mind that there was a benefit to the company,” Weisselberg testified.

But Necheles argued that any benefit to the company was ancillary, minimal and unintentional.

“He is atoning for his sins, but as part of the plea deal, the prosecution forced him to testify against the company he helped build,” Necheles told jurors. “Now the prosecution’s case rests on one thing: convincing you, the jurors, that Mr. Weisselberg’s actions were done in behalf of the company.”

The former president's eldest son suggested Montana residents shoot down the balloon themselves — despite that being logistically impossible.
MONTANA STATE・9 HOURS AGO
TheDailyBeast

Former President Donald Trump appears to have lied in sworn court records, opening him up to severe sanctions by a New York judge who has already lost his patience and threatened to punish him before.Trump claimed he wasn’t the president of the Trump Organization during his four years at the White House, despite previously testifying that he was an “inactive president.” And he claimed that he didn’t have a financial stake in a partnership with the real estate company Vornado, even though he previously testified that he did.On Tuesday, the New York Attorney General’s Office asked Justice Arthur F. Engoron...
NEW YORK CITY, NY・3 DAYS AGO
SheKnows

With Donald Trump running for president for the third time, all eyes are on his Save America Political Action Committee and how they are spending those funds. One curious line item that was noted involves not the 45th president, but former First Lady Melania Trump. The PAC’s 2022 financial filing had eight payments ranging between $6,000 to $18,000 to hairstylist Hervé Pierre Braillard for “strategy consulting,” totaling $132,0000, according to documents obtained by Fox News Digital. It’s an astronomical sum to do one head of hair, especially when it flouts Federal Election Commission regulations. The FEC “does not allow candidate committees,...
1 DAY AGO
San Diego Union-Tribune

As the Manhattan district attorney's office again ramps up its yearslong investigation of Donald Trump, a new book by a former prosecutor who once led the probe details just how close the former president came to getting indicted — and laments friction with the new D
MANHATTAN, NY・6 HOURS AGO
San Diego Union-Tribune

Former Brazilian President Jair Bolsonaro spoke to hundreds of supporters at a property owned by former U.S. President Donald Trump Friday and did not discourage them from claiming he lost his election due to fraud
FLORIDA STATE・3 HOURS AGO
HuffPost

The Senate minority leader previously said he had no hard feelings toward the men, but his actions said otherwise.
UTAH STATE・1 DAY AGO
News Breaking LIVE

Another Top Republican Is Running Against Trump in 2024

The race for the 2024 Republican nomination for president has been slow going since former President Donald Trump became the first candidate to officially throw his hat into the ring back in November, but we are likely to see another major candidate announce their intention to run in the coming weeks.
2 DAYS AGO
Newsweek

Donald Trump Prophet Predicts Death of Democrats: 'You Will See Many Die'

Explaining what she was told by God, pastor Julie Green said individuals will be hauled out of government buildings in handcuffs in the future.
13 HOURS AGO
RadarOnline

Democratic House Rep. Maxine Waters came under fire this week after it was revealed her daughter was paid more than $192k in campaign funds to run the congresswoman’s “slate mailer” operation, RadarOnline.com has learned.Waters’ daughter Karen reportedly earned $192,300 between January 2021 and December 2022 for running her mother’s operation that sees the 84-year-old California congresswoman endorse candidates and ballot measures via political advertisements that are then mailed en masse to residents throughout the state.According to Daily Mail, Waters also received payments for appearing on the slate mailers and her daughter has reportedly collected more than $1.2 million since the...
CALIFORNIA STATE・2 DAYS AGO
RadarOnline

Alexandria Ocasio-Cortez is among four House lawmakers accused of paying a Chinese foreign agent to help with their 2022 reelection campaigns, RadarOnline.com has learned. In a surprising development to come as tensions between the United States and China are already at an all-time high, newly released campaign finance records show AOC is one of at least four House members who paid a Chinese newspaper thousands of dollars in campaign funds last year.According to the filings from the Federal Election Commission, AOC paid Sing Tao Newspapers almost $1,500 to run advertisements for her campaign during the 2022 midterms.House Reps. Grace Meng...
CALIFORNIA STATE・1 DAY AGO
Business Insider

The resolution, sponsored by Cuban-American Republican Rep. Maria Elvira Salazar, was met with eye-rolls from many in the Democratic Party.
MASSACHUSETTS STATE・1 DAY AGO
San Diego Union-Tribune

Surf instructor Matthew Coleman is accused of killing his children with a spearfishing gun in Rosarito while allegedly paranoid and obsessed with conspiracies
SANTA BARBARA, CA・2 DAYS AGO
San Diego Union-Tribune

Husband and wife get decade in prison for terror support

A husband-wife militant duo will spend about a decade in prison after each of them pleaded guilty to trying to provide material support to a terrorist organization
HOOVER, AL・7 HOURS AGO
San Diego Union-Tribune

Sorry, not sorry: Some 1/6 rioters change tune after apology

Some Jan. 6 defendants who have expressed remorse in court for joining the pro-Trump mob that stormed the Capitol have later struck a different tone or downplayed the deadly riot publicly
GEORGIA STATE・16 HOURS AGO