Detroit, Mich (WGR 550) - The Buffalo Sabres were back on the road Wednesday night on a short one-game road-trip against the Detroit Red Wings.

Detroit got the scoring going in the game with Jonatan Berggren scoring 80 seconds into the game. Sabres forward Dylan Cozens tied things up shortly after with a short-handed goal. Defenseman Matias Samuelsson gave the Sabres the 2-1 lead at the midway point of the period with his first ever NHL goal.

The Sabres kept the goals coming in the second period. Cozens added his second of the night halfway through the period, and Jeff Skinner scored just two minutes later and gave Buffalo a 4-1 lead.

The third period was a challenging one for the Sabres. Red Wings forward David Perron kicked off the scoring for the period and then Oskar Sundqvist scored two goals in two minutes to tie the game for Detroit. The Sabres successfully killed off a five-on-three penalty situation that lasted until the dying seconds of the third forcing overtime.

Overtime wasn't as eventful for either side with only a few shots for either team in the period. This forced a shootout where Sabres goaltender Craig Anderson was perfect stopping all three shooters. Sabres forward Jack Quinn won the game in walk-off fashion for his team in the third round of the shootout.

The Sabres once again had a big lead and couldn't close things out in regulation, but this time were able to recover and secure the win.

Here are this game's three observations: 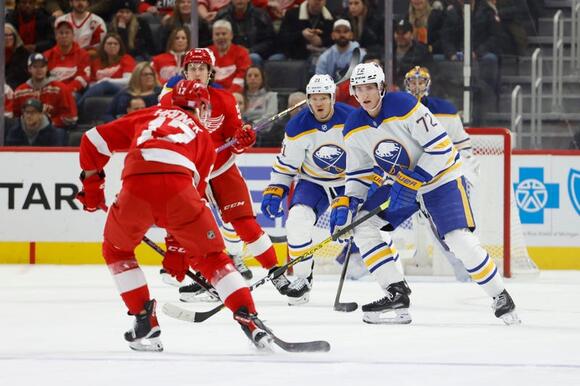 Winning anything off the draw for the Sabres in this game was nearly impossible. The team was credited for winning only 32 percent of faceoffs throughout the whole game.

A large part of these were lost while the Sabres were short handed which can make things significantly harder on the penalty killers who are on the ice.

One of the main issues the Sabres had towards the end of this game was possession and these faceoffs would've made a huge difference for the team to keep hold of their lead. Faceoffs are a key component in any team's victory because they lead to immediate possession of the puck, and also good scoring chances. 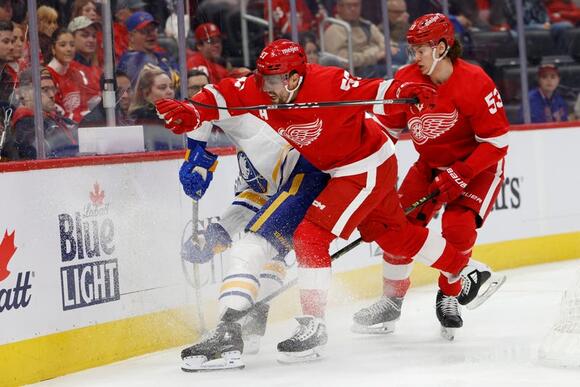 2.) Improvements on the penalty kill

Buffalo had a rough night on the penalty kill against the Tampa Bay Lightning last game but saw massive improvements against the Red Wings on Wednesday night.

One thing that the team did that helped a lot was actually scoring while shorthanded, something that they haven't done all too much this season. Cozens' goal was an definite bright spot for the penalty killers in this game.

The team successfully killed off all seven of Detroit's powerplay opportunities including a two-man advantage in the final minute of the game. They cleared the puck as soon as they could and made sure to waste as much time as possible in these many moments. 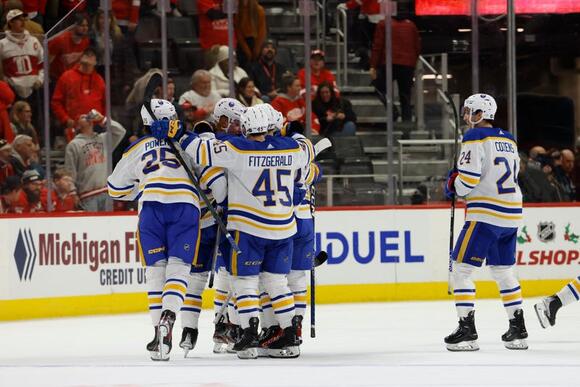 The main issue the Sabres have suffered from in the last two games is surrendering multi-goal leads in the third period. They lost a three goal lead in the third in this game in just a matter of minutes and looked very uninspired for most of the period.

However, this time around the team was actually able to recover and finish what they started, albeit in a shootout, unlike times before. Buffalo can't keep having these moments of lackadaisical play while closing out a game because good teams won't let that go unpunished.

The Sabres return home Thursday night to square off against the Colorado Avalanche. Due to the Buffalo Bills playing on Thursday Night Football, coverage of this Sabres game will begin at 6 p.m. EST on TheBET 1520 AM with Brian Koziol. Puck drop is set for 7 p.m. EST.

The Buffalo Sabres’ five-game winning streak came to an end on Saturday night, as they were defeated by the Minnesota Wild, 3-2, in shootout fashion inside Xcel Energy Center in St. Paul, Minnesota.
BUFFALO, NY・2 DAYS AGO
WGR550

The Buffalo Sabres played another very good game on Saturday in Minnesota, but lost to the Wild in a shootout, 3-2. Paul Hamilton provides his postgame thoughts:
BUFFALO, NY・1 DAY AGO
WGR550

The Buffalo Sabres take their five-game win streak (and perfect road trip) into Xcel Energy Center to battle the Minnesota Wild on Saturday night. Last time these teams got together, Victor Olofsson beat Minnesota 6-5 with an overtime-winner.
BUFFALO, NY・2 DAYS AGO
WGR550

The Buffalo Sabres were finally able to practice on Monday after wrapping up their grueling January schedule of games on Saturday. Paul Hamilton has more:
BUFFALO, NY・7 HOURS AGO