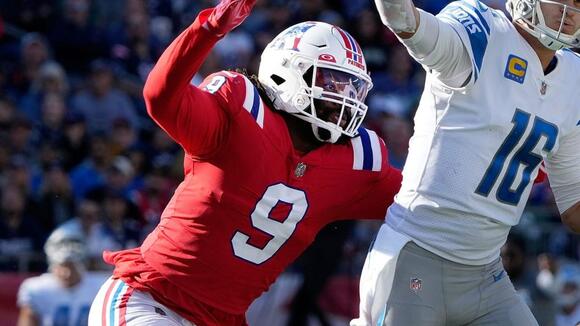 Judon has been New England’s top defender, and one of its most dynamic players overall in 2022.

FOXBORO — Having entered Week 13 with just north of $500,000 in available cap space, the New England Patriots were in need of a move to create a financial cushion with which to financially operate for the remainder of the season.

They did so on Thursday, as the team has restructured the contract of linebacker Matthew Judon. The restructure will add $2.21 million to New England’s current cap room.

Per Patriots salary cap expert Miguel Benzan, New England now has $2,771,795 million in available cap space, as a result of converting $3.32 million of Judon’s salary into a signing bonus. By spreading the bonus throughout the remainder of the contract, Judon’s 2022 cap number was brought down to $14.3 million, while his cap hits in both 2023 and 2024 will increase accordingly.

The 30-year-old linebacker signed a four-year, $54.5 million contract with the Patriots last March.quickly becoming one of the team’s stalwarts on defense. Since his arrival in Foxboro, Judon has routinely proven that he possesses the versatility and adaptability to have earned the spot as the team’s number one player on the edge.

Most importantly, Judon’s presence allowed the Pats front seven to play in position, facilitating their ability to set the edge, and stop the run. He demonstrated a consistency to keep runs from reaching the corner on early downs, as well as providing speed and strength when rushing the quarterback.

In his second season with the club, Judon is once again the centerpiece of New England’s defense. He is ranked first in the NFL with 13 sacks through 11 games. He has also compiled 43 tackles (11 for loss), 23 quarterback hits, three pass-breakups and a forced fumble. He was also named Defensive Player of the Week for his standout performance against the Detroit Lions in Week 5. As a result, he is currently leading all AFC outside linebackers in voting for the 2023 Pro Bowl .

The Patriots will need Judon’s prowess on the field Thursday night, as they host quarterback Josh Allen and the 8-3 Buffalo Bills for a pivotal matchup at Gillette Stadium. Kickoff is set for 8:15 p.m.

While New England's offensive needs an overhaul, just a tweak or two could make its defense No. 1 in the NFL.
5 HOURS AGO
Patriot Country

New Orleans Saints defensive lineman Cam Jordan had a funny way of saying goodbye to a key member of the team’s coaching staff. The Atlanta Falcons named Ryan Nielsen, previously the co-defensive coordinator and defensive line coach for the Saints, to be their new defensive coordinator on Friday. Jordan had nothing but praise for Nielsen,... The post Cam Jordan has funny message for departing Saints assistant appeared first on Larry Brown Sports.
ATLANTA, GA・12 MINUTES AGO
Patriot Country

Not to be confused with a hype video, Bill O'Brien makes his first comments about returning to New England.
23 HOURS AGO
Patriot Country

Patriots Face Difficult Schedule in 2023; Where it Ranks?

The Patriots' path back to the postseason will only get rockier.
TENNESSEE STATE・20 HOURS AGO
Patriot Country

The New England Patriots appear poised to cash in on compensatory picks at the upcoming NFL Draft.
WASHINGTON STATE・1 DAY AGO
FastBreak on FanNation

If the New England Patriots elect to move on from Damien Harris this offseason, Saquon Barkley could be an attainable option.
ALABAMA STATE・2 DAYS AGO
Patriot Country

The legendary ex-Patriots tight end had his most productive season as a pro while being coached by O’Brien.
ARIZONA STATE・1 DAY AGO
Patriot Country

New England's rookies continue to earn praise for some stellar performances during the 2022 regular season.
2 DAYS AGO