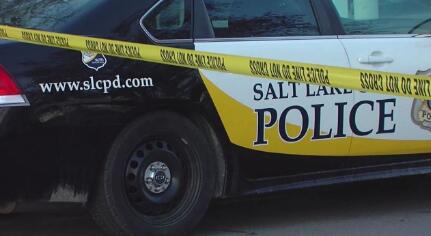 Editor’s Note: This article has been updated to reflect a more accurate timeline of when detectives believe the burglaries occurred.

According to the SLCPD, Jack allegedly broke into a law office located near 50 East and South Temple as well as Utah Attorney General’s office space inside the Heber M. Wells Building at 160 East and 300 South.

Detectives believe the first burglary at the Heber M. Wells Building happened at 11:30 p.m. on Friday and the second burglary happened several hours later at about 10:30 a.m. at the law office on South Temple the next day.

Police say they started their investigation just after 10:30 a.m. on Saturday, Nov. 26 after receiving reports of the burglaries. Officials were reportedly able to identify Jack with the assistance of a property manager and security guard.

Jack allegedly had property taken from both locations as well as illegal drugs and paraphernalia when police took him into custody.

Jack was booked into the Salt Lake County Metro Jail, but has since been released from custody on pretrial supervision, according to police.

All charges are only allegations. Every arrested person is presumed innocent unless and until proven guilty beyond a reasonable doubt.

Sandy Police and a few victims were witnesses to erratic driving, crashed vehicles, a pulled gun, and then a chase Wednesday morning. The driver faces numerous charges as a result.
SANDY, UT・1 DAY AGO
ABC4

A Utah man is facing 11 charges after allegedly causing a multi-car wreck on Interstate 80 that led to the deaths of five Arkansas students on Sunday, Jan. 22.
SHERWOOD, AR・1 DAY AGO
ABC4

A man reportedly had his truck stolen on Tuesday, Jan. 24, and when he recovered it a day later, the unsecured gun he had stored inside the vehicle was gone.
SALT LAKE CITY, UT・1 DAY AGO
ABC4

The Salt Lake City Police Department has arrested the suspect involved in an aggravated rape case that occurred in Taylorsville earlier this month.
TAYLORSVILLE, UT・3 DAYS AGO
ABC4

A person was found dead in the foothills above Beck Street on Wednesday, Jan. 25, according to the Salt Lake City Police Department.
SALT LAKE CITY, UT・2 DAYS AGO
ABC4

A man has been ordered to serve 25 years to life in the Utah State Prison on Wednesday, Jan. 25, after he committed murder while out on parole, according to court documents.
NORTH OGDEN, UT・1 DAY AGO
ABC4

Police are cracking down on bath salt trafficking and warning the public of the dangers of the drug, according to a press release.
SALT LAKE CITY, UT・3 DAYS AGO
ABC4

A 66-year-old man has been pronounced dead after a head-on crash with a semi-truck on Tuesday.
BLACKFOOT, ID・3 DAYS AGO
ABC4

A shooting in Ogden left two people hospitalized early Sunday morning in what was a "likely targeted" incident, according to the Ogden Police Dept.
OGDEN, UT・5 DAYS AGO
ABC4

The Park City Police Department is asking the public for help in locating a bronze statue of a bear holding a coffee mug on Monday, Jan. 23.
PARK CITY, UT・4 DAYS AGO
ABC4

A 14-year-old girl was kidnapped, taken to an Airbnb, and ultimately saved by the SafeUT app early Saturday morning, according to Salt Lake City Police.
SALT LAKE CITY, UT・4 DAYS AGO
ABC4

A 14-year-old Hillcrest High student was involved in a "scuffle" with a school resource officer Monday, in which the officer found that the student was carrying a gun in his waistband.
MIDVALE, UT・4 DAYS AGO
ABC4

The man who ran over and killed a 13-year-old boy last year has been sentenced to up to 20 years in prison on Monday, Jan. 23.
WEST JORDAN, UT・4 DAYS AGO
ABC4

With temperatures dropping into the 20s in recent days, homeless advocates are furious with Salt Lake City officials after they reportedly removed several tents in the downtown area without notice on Tuesday, Jan. 24.
SALT LAKE CITY, UT・3 DAYS AGO
ABC4

The Salt Lake City Police Department's Gang Unit and Bike Squad chased down a vehicle Sunday, arresting a fugitive allegedly in possession of a gun, according to a press release.
SALT LAKE CITY, UT・5 DAYS AGO
ABC4

SALT LAKE CITY (ABC4) – Gov. Spencer Cox recently gave his State of the State address, but it’s obvious he didn’t know that Utah would find itself in such an icy grip after his talk. Since the 19th of January, few locations in the state have made it to normal average temperatures, and it looks like […]
UTAH STATE・3 DAYS AGO
ABC4

One of her most notable announcements includes a historic $100 million fundraising initiative for the Ballpark neighborhood led by the Larry H. and Gail Miller Family Foundation, the city, Zions Bank and Intermountain Health.
SALT LAKE CITY, UT・2 DAYS AGO