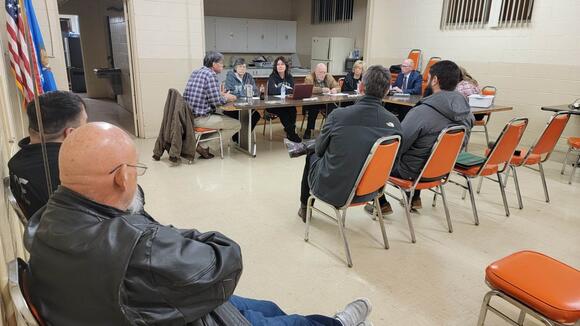 OKLAHOMA CITY ( KFOR ) – A dilemma over a restaurant drive-thru continues in Garvin County. A man has been in protest as the Town of Maysville constructed a sidewalk in front of his wife’s taco restaurant, and he got to further express his frustrations at a special town meeting Wednesday night.

Ricky Page told the town trustees that the recently constructed sidewalk is stealing two-thirds of Toodles Tacos’ revenue, since it blocks its drive-thru and drivers can’t access it.

“Y’alls the one that’s robbing her of her livelihood!” he yelled at the meeting, that was specially held just to discuss his complaints.

Page told KFOR that he wishes a solution could have been found before the concrete was laid last week.

“What set me off was they had the opportunity to do this right before they poured this cement and they basically told me to kick rocks,” he said.

The sidewalk was funded by a state grant and is meant to help people with disabilities.
A town trustee told KFOR the contractors constructed it exactly as the grant’s blueprint directed, but as a result Toodles Tacos has since had to close their drive-thru.

“My wife loses hundreds of dollars a day of revenue every day that this is not fixed,” he told us.
The town’s special meeting was called to see if there was a way to help Page and his wife, and although it was contentious, the trustees ultimately voted to spend upwards of $500 to construct a ramp off of the sidewalk, as long as Page changes two metal panels on the restaurant’s fence to clear ones so that both drivers on the street and in the drive-thru can see each other.
Page said he’d accept the deal for now.

“His solution right now is to dump rock against that curb so people can drive off of it,” he said, seemingly not fully satisfied. “He’s going to throw rock in the street. That is not a solution.”
Town trustees said the construction of the ramp should begin sometime this week.

Details are moving forward with the plans to build the new Oklahoma County Jail.
OKLAHOMA COUNTY, OK・10 HOURS AGO
KFOR

Nearly 500 students from districts all over, got the chance to travel back in time and meet history face to face Friday as part of the state's 19th “Colonial Day”.
OKLAHOMA CITY, OK・13 HOURS AGO
KFOR

Voters across the metro will be heading to the polls next month to decide on several city-specific projects and positions.
NORMAN, OK・1 DAY AGO
KFOR

Benefits include 96 hours of vacation leave, 130 hours of sick leave per year, and 11 regular holidays per year.
OKLAHOMA CITY, OK・21 HOURS AGO
KFOR

“This is an emergency!” OKC Animal Welfare in desperate need of adoptions

Oklahoma City Animal Welfare says it is out of room and desperately needs adoptions.
OKLAHOMA CITY, OK・20 HOURS AGO
KFOR

Tragedy struck in a Northwest Oklahoma City neighborhood Friday afternoon, as an elderly man was killed in a house fire.
OKLAHOMA CITY, OK・57 MINUTES AGO
KFOR

City officials and the Homeless Alliance are teaming up to record the number of people experiencing homelessness in Oklahoma City.
OKLAHOMA CITY, OK・1 DAY AGO
KFOR

US Secretary of Education coming to Oklahoma

On Thursday, Cardona will be in Oklahoma City to visit a career and technical program and speak with students and tribal leaders.
OKLAHOMA CITY, OK・1 DAY AGO
KFOR

The Oklahoma Supreme Court is backing up a decision by the Oklahoma County Election Board.
OKLAHOMA CITY, OK・2 DAYS AGO
KFOR

Divers with the Oklahoma Highway Patrol were able to pull a stolen pickup truck from an Oklahoma river.
SHAWNEE, OK・21 HOURS AGO
KFOR

Following a series of interviews and court documents, we're getting a more complete picture of what happened to a little girl who is presumed dead.
GRADY COUNTY, OK・1 DAY AGO
KFOR

Video: OKC police on the lookout for porch pirate

A new rule from the Department of Justice is causing quite the stir here in the sooner state.
LOGAN COUNTY, OK・1 DAY AGO
KFOR

Oklahoma City Police department is responding to the video of the tragic death of Tyre Nichols.
OKLAHOMA CITY, OK・8 HOURS AGO
KFOR

A fifth grader in Blanchard is being hailed a hero. Thanks to his quick thinking and courage, he saved his friend from choking at lunch.
BLANCHARD, OK・1 HOUR AGO
KFOR

Fire officials say a space heater is the cause of a Luther family losing their home to a fire.
OKLAHOMA CITY, OK・1 DAY AGO