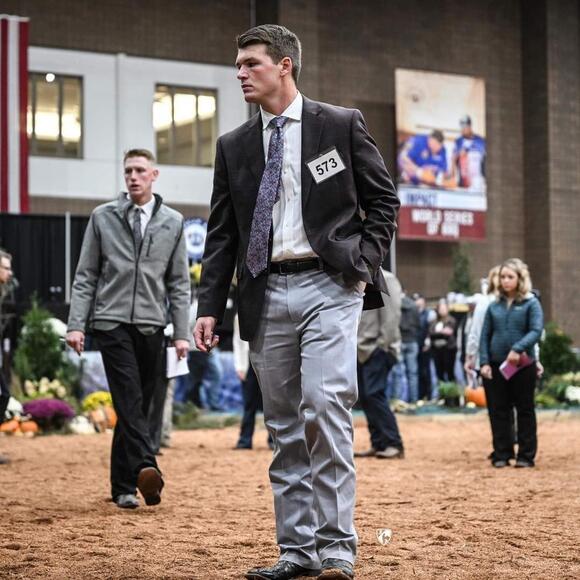 In 2014, they were the Minnesota intermediate livestock-judging champions. This time around, they went head-to-head to represent their colleges in a national competition.

NAILE is a competition where several universities send their livestock-judging teams to compete. The competition is judged based on how accurately the college students score various animals and why they gave the scores they did.

First, each student gives a score for each category and species of livestock. Then, they give an oral presentation to a set of judges, who decide whether their scores are accurate.

Each student is assigned a numerical score out of 1,000, which is their individual score. At the end, each team’s individual scores are added together and make up the team’s overall score, which will fall somewhere between 1 and 5,000.

This year, Oklahoma State University’s general livestock judging team got 4,685 points, making it the national champions for 2022. They received several plaques, trophies and $4,500 in scholarships.

Schultz was on OSU’s team. His individual score was the 15th highest in the nation.

“When we found out that we won, we were all filled with a flood of emotions,” Schultz said. “All the work we put in, the early mornings, long van rides, and miserable weather we had endured throughout the year was all worth it to come out on top. … We were mentally and emotionally exhausted from balancing school, livestock judging, and other organizations that we’re involved in, and the fact that were able to accomplish our goal means so much to me.”

The competition was far from a blowout. The reserve-champion team Texas A&M, with 4,684 points, just one less than OSU.

“So our teams have been going back and forth ever since junior college and, outside of just a few contests in senior college, Oklahoma State and Texas A&M were the top two teams pretty much everywhere,” Schultz said. “… The fact that the top two teams were separated by one point is a great testament to the intense rivalry between us and shows just how good our two teams were.”

“To be honest, it kinda stings,” Tut said. “But I’m just thankful that I have the opportunity to be on such a great team. My teammates and my competitors push me to be better every day, and I can only be thankful for that.”

Tut also received one of 10 All-American Awards, which are given to recognize the participants that achieve high academic performance and do significant community service. Texas A&M’s team had seven of the All-American winners.

“I think that’s the most All-Americans that one university has ever had,” he said. “So, I’m just very grateful that I was able to be one of the 10. To be a part of history, if you will. … Although we didn’t come out on top, there’s a lot of life lessons that my teammates and I learned. Communication skills, decision making, making connections and fostering relationships with anybody and everybody across the country.”

The University of Minnesota’s team received 4,443 points, putting it in ninth place. According to Tut, there were 22 senior colleges that competed.

“Our goal was to be top 10,” Flom said. “We thought we’d be a little bit better than that, so we’re pretty happy with ninth place. We beat some good teams and lost to some better teams. That’s probably right where we should’ve been.”

Disregarding the scores and placements, Flom said the experience itself was one of the best parts. He made friends with people from all over the U.S. and was able to reconnect with some of his former Faribault 4-H teammates.

“It’s actually really cool to see people that I grew up with and were on my team when I was younger,” he said. “It was really cool to see them and judge alongside them. … Texas and Oklahoma are a long way from here, so it’s kinda my only opportunity to see them in the last couple years, so I really enjoyed that.”

“We’ve been friends since we were very little and have always been rooting for each other,” he said. “I was on the National Champion team and Tar was on the Reserve National Champion team. He was one of the first people not on my team to come up to me after we won and we gave each other a huge hug. Nick also was super happy for us. I’m really proud of those guys. I’m incredibly grateful to call them friends and am so proud of the things they have accomplished and I’ll always be supporting them and their goals.”