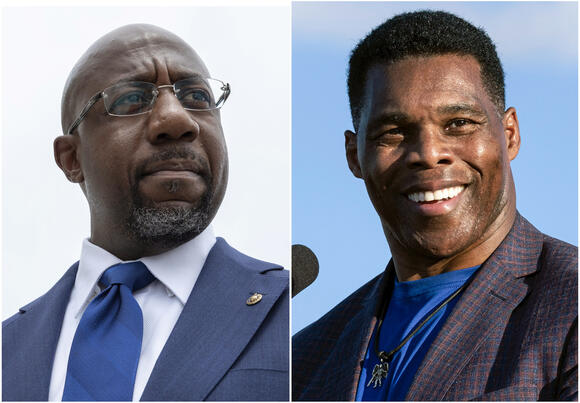 (WJBF) — A brand new poll released Thursday morning shows incumbent Senator Raphael Warnock with a slight edge over challenger Herschel Walker with just five days left until their runoff for one of Georgia’s seats in the U.S. Senate.

Warnock leads in the latest polling

“Warnock’s base lies with voters under 50, a 55% majority support him for re-election, whereas Walker holds a similar 55% majority among voters over 50,” said Spencer Kimball, Executive Director of Emerson College Polling, “The early vote breaks for Warnock by about 29 points, 63% to 34%, whereas those who have yet to cast their ballot break for Walker by eight points 52% to 44%.”

Kimball says those polled believe a Walker win would surprise the majority of voters, even with the ballot test being well within the poll’s margin of error.

“About 1 in 5 Republicans expect their nominee to lose. This reflects a significant shift since the last pre-general election poll earlier this month, where voters were nearly 50-50 if Warnock or Walker would win,” said Kimball.

Prominent issues and a hypothetical presidency

The economy remains a top issue for Georgia voters, with 43 percent saying it is the most important issue in determining their vote in the run-off, followed by “threats to democracy” (13%) and abortion access (12%).

Since the general election, the economy has decreased in concern by three percentage points, while concern for “threats to democracy” and abortion access increased one point each.

President Biden holds a 42 percent approval rating among runoff voters, with 52 percent disapproving of the job he is doing as president. Biden’s approval rating from before the general election has increased by one percentage point, but his disapproval remained steady.

The WJBF/The Hill/Emerson College Polling survey of Georgia voters was conducted November 28-30, 2022. The sample consisted of very likely voters, n=888 with a Credibility Interval (CI) similar to a poll’s margin of error (MOE) of +/- 3.2 percentage points. The data sets were weighted by gender, age, education, race, party affiliation and region based on 2022 turnout modeling. It is important to remember that subsets based on demographics carry with them higher margins of error, as the sample size is reduced. Data was collected using a cellphone sample using SMS-to-web, an online panel, and an Interactive Voice Response (IVR) system of landlines.

Whether you dread it or welcome it, daylight saving time is fast approaching this year.
FLORIDA STATE・1 DAY AGO
WJBF

Two children abducted from Missouri were found inside of a Florida grocery store on Wednesday, nearly one year after they disappeared.
HIGH SPRINGS, FL・1 DAY AGO
SheKnows

Donald Trump’s campaign team in Wisconsin knew they lost the state in the 2020 presidential election, but that didn’t stop them from trying to spin a fraud narrative. There’s new audio that is confirming that Republican officials behind the scenes were trying to cook up a story that the election was stolen.  This is the latest chaotic issue to come down the pike as Donald Trump tries to run for president for the third time. According to the Associated Press, who posted the leaked audio, the voice is of Andrew Iverson, who led the former president’s campaign in Wisconsin, and shockingly...
WISCONSIN STATE・3 DAYS AGO
WJBF

Investigators have arrested a man in a crash on Olive Road that killed a bicyclist.
RICHMOND COUNTY, GA・3 DAYS AGO
Toni Koraza

Photo byPhoto 122725292 © Joe Tabb | Dreamstime.com. DeSantis is keeping his 2024 plans quiet, while Trump loses no time to coming after DeSantis. Former President Donald Trump intensified the tension between him and Ron DeSantis when he shared a video of the Florida governor on his Truth Social page.
FLORIDA STATE・10 HOURS AGO
WJBF

AUGUSTA, Ga. (WJBF)– As many in the country watched the spy balloon drop on TV, a former Augustan saw it LIVE at his house. Video was shot by Brian Bolgla who now lives in Myrtle Beach. He was standing in his driveway watching it unfold. He describes to WJBF’s Barclay Bishop what he saw and […]
AUGUSTA, GA・1 DAY AGO
WJBF

China said Friday that a balloon spotted over American airspace was used for weather research and was blown off course, despite U.S. suspicion it was spying. The discovery further strained already tense relations between Beijing and Washington.
MONTANA STATE・3 DAYS AGO
WJBF

RICHMOND COUNTY, Ga. (WJBF) – One person has died after being ejected from the vehicle in an accident. According to the Richmond County Sheriff’s Traffic Division, officers responded to an accident on the I-20 Eastbound exit ramp to I-520 Westbound on Monday at 1:09 P.M. According to investigators, the vehicle exited the roadway in an […]
RICHMOND COUNTY, GA・59 MINUTES AGO
WJBF

Poll: Some Democrats now believe President Biden should only serve one term

WASHINGTON (AP) – A majority of Democrats now think one term is plenty for President Joe Biden, despite his insistence that he plans to seek reelection in 2024, according to a new poll from The Associated Press-NORC Center for Public Affairs Research. It shows just 37% of Democrats say they want Biden to seek a […]
WASHINGTON STATE・1 HOUR AGO
WJBF

The beloved White Columns Inn that used to be an attraction for near and far travelers in Thomson is gone. The demolition happened last week after it was announced in October 2022.
THOMSON, GA・3 DAYS AGO
WJBF

A stronger-than-expected jobs report has put the wind at President Biden’s back ahead of his State of the Union address next week, and it could provide additional momentum as he prepares a reelection announcement in the coming weeks. Biden on Friday hailed new data from the Labor Department that showed the economy added 517,000 jobs […]
3 DAYS AGO
WJBF

RICHMOND COUNTY, Ga. (WJBF) – An investigation is underway after a man was found shot to death. Authorities say on Saturday at approximately 1:24pm, Richmond County Sheriff’s Office Deputies responded to a vacant building on the 3400 block of Meadowbrook Drive for a call about a deceased unidentified black male. That man has been identified […]
AUGUSTA, GA・1 DAY AGO
WJBF

President Biden said on Saturday that he had ordered the military to down the balloon “as soon as possible” after he was briefed on the matter on Wednesday.
MONTANA STATE・1 DAY AGO