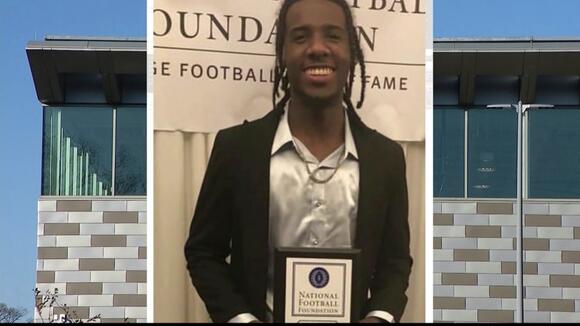 Police have released the identity of a 19-year-old killed in a three-car crash in Lynbrook.

According to police, Nasir Reid, was behind the wheel of a BMW on Ocean Avenue just after midnight on Tuesday.

That is when detectives say Reid's car collided with an SUV near the Peninsula Boulevard intersection.

News 12 has been told the BMW then hit a nearby pick-up truck that was stopped at a traffic light.

Reid was a member of the Roosevelt High School football team.

His coach Joe Vito says the community is mourning the the loss of Reid.

"I think the student athlete part is so important because he was such a good student and his smile, I will never forget his smile," Vito said. "He just lit up a room when he came in and that's something we're never going to forget."

Reid was also a National Football Foundation Scholar Athlete in his senior year. He graduated from Roosevelt High School in 2020 and went off to trade school.

The drivers and passenger in the other two vehicles had minor injuries and are expected to be OK.

The cause of the crash is unknown.

The school's football team says they will say his name when they break their huddle so he will never be forgotten.

Trumbull police say at 8 p.m, Jovanie Hall, 18, of Bridgeport, drove to the mall to pick up his brothers. They say as they walked in the parking lot, Hall stabbed his 16-year-old brother.
TRUMBULL, CT・1 DAY AGO
News 12

The struggle to survive continues for an NYPD officer after he was shot in an attempted robbery Saturday.
NEW YORK CITY, NY・8 HOURS AGO
News 12

According to Middletown Mayor Tony Perry, four men tried a different tactic in their attempt to steal cars Sunday morning - they rented their getaway car off an app known as Turo.
HOLMDEL, NJ・9 HOURS AGO
News 12

A North Carolina man was sentenced to 25 years for an armed Yonkers home invasion back in 2018.
YONKERS, NY・4 HOURS AGO
News 12

Police say a driver in a BMW was driving westbound when the car crashed into an eastbound Toyota Sedan attempting to turn left into a parking lot.
WEST ISLIP, NY・2 DAYS AGO
News 12

Police are now asking for the public's help and set up electronic boards asking the community for any information connected to Wednesday night's shooting death of Sayreville Councilwoman Eunice Dwumfour.
SAYREVILLE, NJ・1 DAY AGO
News 12

An off-duty police officer was shot Saturday night while attempting to buy a car from someone he met through social media.
BROOKLYN, NY・1 DAY AGO