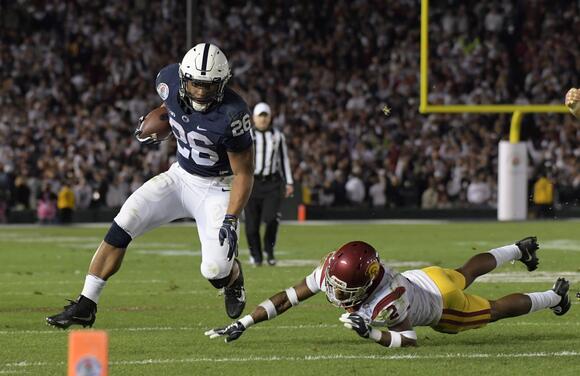 The last major hurdle to expediting the path to expansion of the College Football Playoff has reportedly been cleared. According to a report from ESPN’s Pete Thamel , and collaborated by Associated Press national college football reporter Ralph Russo , the Rose Bowl will amend its agreements in place to accommodate expansion of the College Football Playoff in the 2024 season.

No matter how it got there, the Rose Bowl’s organizers were never going to let the game be left out of any expanded playoff structure, and the College Football Playoff would have been crazy to level behind the most iconic bowl game in the sport. With the Rose Bowl onboard by any means necessary, all systems appear to be go for an expanded playoff field beginning in the 2024 season.

The new 12-team format will guarantee a spot in the playoff for the six highest-ranked conference champions and six at-large spots. The top four teams will receive a bye week and the remaining eight teams will play a playoff game on the home campus of the higher seed (5-8).

The next round of the playoff will take place in the current New Years Six bowl structure with bowls rating between quarterfinal and semifinal games each year. The national championship game will continue to be played in a bidding host city as it has each year of the College Football Playoff’s existence.

An official announcement from the College Football Playoff about the expansion could come as early as Thursday.

Alabama’s football program has had one set of twins in years past. That happened in 2021 when the Tide signed Tommy and James Brockemeyer. Well, Alabama has put itself in a good spot to land a pair of twins in the 2024 recruiting cycle. The Loomis Chaffee School’s Jerod and Jacob Smith listed the Tide as a finalist in their recruitment on Wednesday.
TUSCALOOSA, AL・2 DAYS AGO
USA TODAY Sports Media Group

2023 five-star cornerback A.J. Harris is one of the top recruits in Georgia’s No. 2 ranked recruiting class. The 6-foot-1, 180-pound cornerback out of Phenix City, Ala., is ranked the No. 37 recruit, the No. 3 corner and No. 4 player in Alabama. Harris played both cornerback and receiver...
ATHENS, GA・2 DAYS AGO
USA TODAY Sports Media Group

Aside from the Senior Bowl, there’s no college all-star game more important than the East-West Shrine Bowl in terms of evaluating prospects for the NFL draft. This year’s game is scheduled for February 2 and practice will start early next week. Here are five guys you might not have heard of for the Pittsburgh Steelers to keep an eye on.
PITTSBURGH, PA・11 HOURS AGO
USA TODAY Sports Media Group

The Oklahoma Sooners picked up another prediction for 2024 four-star running back, Jeremy Payne. This time from SoonerScoop.com’s Josh McCuistion. Less than a week after receiving a Rivals FutureCast from national recruiting analyst Nick Harris, McCuistion followed that up with a favorable Sooners prediction of his own. Oklahoma running...
NORMAN, OK・14 HOURS AGO
The Big Lead

Joe Burrow was caught on a hot mic saying 'I'm him,' and his response was perfect

Cincinnati’s impressive 27-10 win over the Buffalo Bills was one of the most impressive of Joe Burrow’s five playoff wins as he picked apart one of the league’s more talented defenses as a barrage of snow fell in Orchard Park, New York. During that win — which...
CINCINNATI, OH・2 DAYS AGO
USA TODAY Sports Media Group

While four teams remain in the chase for the Lombardi Trophy, the rest of the league has already moved on to the offseason, and preparations for the 2023 NFL draft will kick into another gear next week. That’s because the NFL world will once again descend upon Mobile, Alabama, for...
GEORGIA STATE・2 DAYS AGO
USA TODAY Sports Media Group

Breece Hall says Brock Purdy, his college roommate, wouldn't talk to him if he beat him in Madden, 2k

A member of Auburn Football’s 2018 recruiting class has found a new home. Asa Martin, who played running back for Auburn during the 2018 season, has announced that he will transfer to fellow in-state program Troy after spending the last three seasons at Memphis. During his time in Memphis,...
AUBURN, AL・2 DAYS AGO
USA TODAY Sports Media Group

NFC Championship picks: Who the 'experts' are taking in Eagles vs. 49ers

The Eagles and 49ers are preparing for a heavyweight showdown on Sunday at Lincoln Financial Field, highlighted by star power on both sides of the football. Philadelphia got off to a 13-1 start and outside of two consecutive losses without an injured Jalen Hurts, the Eagles have been the NFC’s top team.
PHILADELPHIA, PA・1 DAY AGO
USA TODAY Sports Media Group

Butch Harmon makes a prediction about Rickie Fowler after changing his swing: 'I think he'll win this year'

SAN DIEGO – When Rickie Fowler reached out to Butch Harmon and asked him to take a look at his swing, the famed golf swing instructor, who had coached the 34-year-old Fowler during the most successful years of his career, admitted that he shared a thought with many of Fowler’s ardent fans: What took so long?
2 DAYS AGO
USA TODAY Sports Media Group

One of LSU’s top targets in the 2024 class was set to make a decision following the weekend, but now it seems like JJ Harrell’s plans have changed. After picking up some new offers — most notably from Alabama after coach Nick Saban visited the Sardis, Mississippi, prospect at his school, North Panola High School — Harrell will no longer commit on Jan. 30, he told On3’s Sam Spiegelman.
BATON ROUGE, LA・1 DAY AGO
USA TODAY Sports Media Group

Although there were rumors about Michigan football bringing Brian Griese back to Ann Arbor to become the QB coach, or bringing in recruiting guru, Tee Martin to coach the position — the Wolverines decided to fill the vacancy from within. On Friday, Jim Harbaugh announced Michigan promoted Kirk Campbell...
ANN ARBOR, MI・1 DAY AGO
USA TODAY Sports Media Group

The title of the greatest shooter in NCAA history now resides in Norman, Okla., after Taylor Robertson set a new all-time record with No. 498 against the Iowa State Cyclones. Robertson, who’s become synonymous with three-point shooting, put the Oklahoma Sooners up 16-11 early in the first quarter of a pivotal Big 12 matchup with No. 18 Iowa State.
AMES, IA・6 HOURS AGO
USA TODAY Sports Media Group

Kliff Kingsbury was the offensive coordinator for USC under Clay Helton and former athletic director Lynn Swann … for a few minutes. Kingsbury flew to Arizona to don some red wings with the Cardinals before he ever called a play for the Trojans. The inability to actually retain Kingsbury after hiring him was a reflection of the extent to which the USC program suffered under the previous regime, before new AD Mike Bohn came to Los Angeles. Keep in mind that USC reached New Year’s Six bowls in 2016 and 2017 because of Sam Darnold. The Trojans won the Pac-12 championship in 2017. Even then — in spite of those accomplishments — Kingsbury didn’t view USC as a place he had to stay, not even for one year.
LOS ANGELES, CA・2 DAYS AGO
USA TODAY Sports Media Group

It’s not always big news when a graduate assistant is hired, but as Ohio State announced that former player James Laurinaitis was joining Ryan Day’s staff, it was viewed as a great addition. “Little Animal” brings a bit of coaching experience as he held the same position last...
COLUMBUS, OH・3 HOURS AGO
USA TODAY Sports Media Group

On Thursday afternoon, the Carolina Panthers gave their gold medal to Frank Reich—naming him their new and sixth full-time head coach in franchise history. So, who got the silver?. According to Kellen Moore, it was Kellen Moore. Panthers beat writer Sheena Quick reported that the 34-year-old offensive coordinator told...
CHARLOTTE, NC・2 DAYS AGO
USA TODAY Sports Media Group

Hugh Freeze and company are getting an early start in their recruiting efforts for this talented in-state quarterback. Trent Seaborn, best known for leading in-state power Thompson High School to a state championship in 2022 as an eighth-grade quarterback, announced via Twitter that he is set to visit Auburn this weekend.
ARKANSAS STATE・2 DAYS AGO