Is The Worst Performing FAANG Stock of 2022 a Buy?

The tech-centric Nasdaq Composite is home to hundreds of corporations, but few are as prominent as those sometimes referred to by the acronym "FAANG." This group includes several major companies, including Facebook parent Meta Platforms (NASDAQ: META) , Apple , Amazon , Netflix , and Google parent Alphabet . Despite their prominence, these high-flying companies haven't escaped the recent sell-off.

The worst performing of these stocks this year has been Meta Platforms. The social media specialist certainly has seen better days, but is a rebound in the cards for the company? 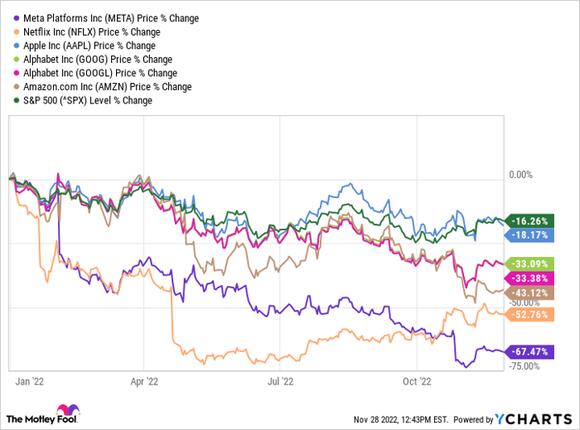 Further, tough competition from the abundance of social media options where businesses can run ads isn't making things easier. The result has been lower sales for companies like Meta Platforms that rely heavily on advertising. The tech-giant's revenue of $84.4 billion increased by less than 1% year over year in the first nine months of 2022.

While revenue is barely growing for the company, costs and expenses are rising much faster -- to the tune of 23.6%, to $61.9 billion in the nine months ending Sept. 30. Naturally, the result is a lower bottom line for Meta Platforms. The company's net earnings per share dropped to $6.82 for this period, down from $10.11.

Meta Platforms might continue to struggle unless it can find better ways to navigate these challenging headwinds or until economic conditions improve.

Despite the obstacles, there are excellent reasons to remain bullish on Meta Platforms. It's difficult to ignore the company's massive user base, with 3.71 billion monthly active people (MAP) across its family of websites and apps. Meta Platforms' MAP increased by 4% year over year in the third quarter.

No matter how long it takes, the advertising industry will recover eventually, and once it does, Meta's revenue growth should pick up.

It's also worth noting that the company has yet to fully monetize some of its apps, especially WhatsApp. It's working on that very project as we speak.

CEO Mark Zuckerberg recently spoke of two monetizing opportunities that are taking shape on WhatsApp . The first is click-to-messaging ads. The feature allows businesses to communicate directly with customers via messaging threads on Facebook Messenger, WhatsApp, or Instagram Direct while running ad campaigns on Facebook or Instagram.

According to Zuckerberg, this option is one of the company's fastest-growing ad products, with a $9 billion annual run rate -- including a $1.5 billion run rate on WhatsApp, where Meta introduced the feature later than it did on Messenger. The company also introduced paid messaging on WhatsApp, a feature that it says is also growing rapidly.

Meta Platforms is still in the early innings of these monetization opportunities. In the coming years, investors should expect WhatsApp to contribute even more to the company's top line.

Of course, Meta is still heavily investing in its metaverse ambitions. Although unlikely to pay off soon, they could eventually represent a massive $1 trillion opportunity. Meta Platforms' solid ecosystem would allow it to be one of the leaders in this space.

Buy while shares are down

The most important thing to remember is that Meta Platforms still has plenty of opportunities to squeeze more money out of its billions of users. The company could also make a dent in e-commerce, for instance.

That, combined with the rebound that the advertising industry will eventually experience, should give investors plenty of hope for the future. What makes the deal even better is that Meta Platforms' shares are currently looking about as attractive as they have in some time. 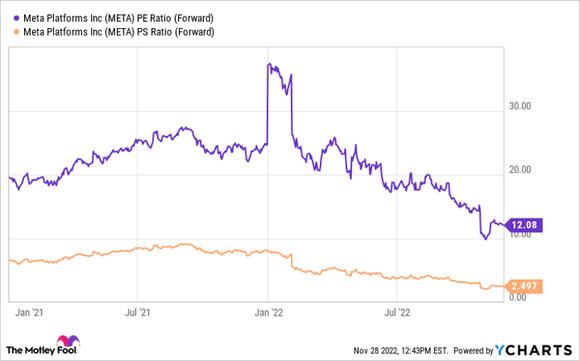 At current levels, investors can safely acquire shares of Meta Platforms and hold onto them for a while.

This Is Warren Buffett's No. 1 Stock to Buy (and You Won't Find It in Berkshire Hathaway's Portfolio)

The Oracle of Omaha has spent over $63 billion since mid-2018 buying a stock that doesn't show up in Berkshire Hathaway's 13F filings or investment portfolio.
2 DAYS AGO
The Motley Fool

These stocks all fell by double digits last year.
2 DAYS AGO
The Motley Fool

The start of a new year is the perfect time to refresh your portfolio.
2 DAYS AGO
The Motley Fool

A Bull Market Is Coming: Why Buying These ETFs Is a Smart Move

Smart investors will think small.
2 DAYS AGO
The Motley Fool

Here's What Happens if You Never Cancel a Credit Card

If you have a credit card gathering dust, here's what to expect.
1 DAY AGO
The Motley Fool

Even when interest rates are high, you could still lose out financially.
2 DAYS AGO
The Motley Fool

Advanced Micro Devices continues to push the boundaries of innovation.
2 DAYS AGO
The Motley Fool

Where Will AMD Stock Be In 1 Year?

The chipmaker's cyclical slowdown might end this year.
2 DAYS AGO
The Motley Fool

3 Dow Stocks That Make for Screaming Buys in February

Out of the Dow Jones Industrial Average's 30 components, there are three amazing deals hiding in plain sight.
2 DAYS AGO
The Motley Fool

The company produced record results last year and has more growth ahead.
17 HOURS AGO
The Motley Fool

These two stocks are blue chips that outperformed in the bear market.
1 DAY AGO
The Motley Fool

These 28 States Will Extend Emergency Food Benefit Payments Through February

Some parts of the U.S. are still paying extra SNAP money this month.
WISCONSIN STATE・2 DAYS AGO
The Motley Fool

Now is the time to buy the rebound in tech stocks with the ones that generate generous income.
2 DAYS AGO
The Motley Fool

Despite a combined century's worth of dividend increases, these businesses still offer substantial passive income potential.
2 DAYS AGO
The Motley Fool

3 Recovering Tech Stocks These Investors Would Buy Without Hesitation

These stocks have more room to run.
17 HOURS AGO
The Motley Fool

2 Top Stocks to Buy Instead of Bed Bath & Beyond

Skip the risk and opt for high growth potential.
2 DAYS AGO
The Motley Fool

3 Stocks I'd Give My Long-Term Valentine

Like a good relationship, a great investment can actually get better over time.
19 HOURS AGO
The Motley Fool

Is Airbnb Stock a Buy?

The company has a bright growth outlook.
18 HOURS AGO
The Motley Fool

Is This Energy Stock Ready for a Big Upswing?

Enbridge is starting to bring on its big wind farm investments. This is the start of an important investment period for the energy stock.
2 DAYS AGO