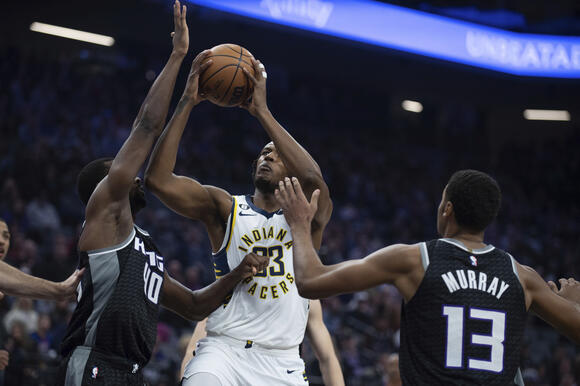 Monk has scored 20 points or more in five games this season for Sacramento (11-9).

“Malik was fantastic,” Kings coach Mike Brown said. “He should start getting some mention for that Sixth Man of the Year stuff. Especially if we keep playing well.”

Prior to the three-game skid, the Kings had won seven straight games and are off to their best 20-game start since the 2004-05 season. The Kings were 14-6 that year. Domantas Sabonis had 11 points, 10 rebounds and seven assists. De’Aaron Fox added 19 points.

“We were excited to play this game,” Keegan Murray said. “We knew that it would be a big turnout.”

Jalen Smith and Bennedict Mathurin both scored 22 points for Indiana (12-9).

“Tough game,” Pacers coach Rick Carlisle said. “This game is on me. I didn’t have them prepared for what was coming.”

The Kings outscored the Pacers 31-8 in fast break points.

“The transition points really tell the story of the game, Carlisle said. “We were a step slow.”

Hield and Haliburton returned to Sacramento for the first time since being traded to the Pacers last February. Hield and Haliburton faced the Kings during the spring in Indiana. Haliburton was the 12th overall pick in the 2020 NBA Draft. Hield is the Kings’ all-time leader in 3-point makes with 1,248.

Kings: F Trey Lyles missed his second consecutive game with a non-COVID illness. … Terence Davis was given a technical foul with 6:14 left in the first half. … Sacramento went 9-5 during the month of November. … Kings have scored over 100 points in every game this season. … Kings are 8-1 when Barnes scores 13 or more points… Sacramento had a season-high 58 rebounds.

Pacers: Travel to Utah to play the Jazz Friday.

INDIANAPOLIS – Myles Turner is staying in Indiana. ESPN’s Adrian Wojnarowski reports the Pacers have signed the center to a two-year, $60 million contract extension, including an additional $17.1M renegotiation of this season’s salary. There had been speculation the team could trade him by the deadline if they couldn’t come to terms on a new […]
INDIANAPOLIS, IN・2 DAYS AGO
FOX59

INDIANAPOLIS (AP) — When the Milwaukee Bucks needed a steadying presence Friday night at Indiana, Giannis Antetokounmpo provided it — even from the free-throw line. The Eastern Conference All-Star captain finished with 41 points, 12 rebounds, six assists and made five of eight free throws during the final four minutes to help the Bucks fend […]
INDIANAPOLIS, IN・3 DAYS AGO
FOX59

MEMPHIS, Tenn. (AP) — Ja Morant had 27 points, 15 assists and 10 rebounds, Jaren Jackson Jr. added 28 points and the Memphis Grizzlies overcame a lackluster first half to defeat the Indiana Pacers 112-100 on Sunday. Brandon Clarke had 13 points, hitting all five of his shots as Memphis snapped a five-game losing streak […]
MEMPHIS, TN・1 DAY AGO
FOX59

LeBron James is being attacked for the way he responded to the video beatdown of Memphis motorist Tyre Nichols on Jan. 7, 2023,. The 29-year-old Black male was beaten to a pulp on the streets of Memphis, Tennessee, following a traffic stop for allegedly driving recklessly, though that was never established by the responding officers.
MEMPHIS, TN・1 DAY AGO
FOX59

MUNCIE, Ind. — Parents of a 5-month-old girl were arrested on Thursday after doctors discovered the baby was suffering from two broken legs, a broken arm, 15 fractured ribs and two skull fractures that caused a brain bleed. The Muncie Police Department arrested Austin Lee Choate, 24, and Montana Alexis Davis, 23, on Thursday evening […]
MUNCIE, IN・3 DAYS AGO
FOX59

COLUMBUS, Ohio (WCMH) — One of the twin infants rescued during a statewide Amber Alert last month has died, police said. Ky’air Thomas died around 11:45 p.m. on Saturday after the Columbus Division of Police responded to reports of a baby not breathing at a house on East Whittier Street, according to a division spokesperson. […]
COLUMBUS, OH・1 DAY AGO
FOX59

With the help of K9s, Edinburgh police recovered 234 grams of meth and six pounds of marijuana.
EDINBURGH, IN・1 DAY AGO
FOX59

The Grant County Sheriff's Office has a man in custody in connection with a deadly shooting that happened over the weekend.
GRANT COUNTY, IN・13 HOURS AGO
FOX59

Deep dish, thin crust, fire grilled — there’s no shortage of ways to make a pizza. Yelp is praising the wonder that is pizza in 100 different ways with its 2023 list of the top places for pizza in the United States and Canada. A trio of Indiana pizza spots made the cut, including two […]
INDIANAPOLIS, IN・4 DAYS AGO
FOX59

INDIANAPOLIS — An Indianapolis man has been found guilty of stabbing an ex-girlfriend and her 3-year-old daughter multiple times in the head with a steak knife before stealing her car and driving away with the child and her grandfather still inside. On Tuesday, a jury found Richard Rybolt guilty of two counts of attempted murder, […]
INDIANAPOLIS, IN・4 DAYS AGO
FOX59

Videos showing the violent arrest of 29-year-old Tyre Nichols, a Memphis man who died 3 days after he was beaten by police in a traffic stop Jan. 7, has been released by Memphis officials.
MEMPHIS, TN・3 DAYS AGO
FOX59

Indiana man arrested in Florida for stealing from at least 11 cars, police say

SARASOTA, Fla. — Police in Florida arrested an Indiana man in connection to a series of vehicle burglaries in Sarasota and Manatee counties. Deputies arrested Michael Martin, 38, on Wednesday. Police said Martin was seen in surveillance photos entering 11 unlocked cars in neighborhoods on the north side of Sarasota County on January 21. He […]
MANATEE COUNTY, FL・3 DAYS AGO
FOX59

INDIANAPOLIS — Police are asking for the public’s help in identifying the driver of a Chevy Camaro accused of striking and injuring a pedestrian on Michigan Street on Tuesday before fleeing the scene. According to the Indianapolis Metropolitan Police Department, the hit-and-run occurred around 8:10 p.m. in the 300 block of W. Michigan Street. Officers […]
INDIANAPOLIS, IN・4 DAYS AGO
FOX59

INDIANAPOLIS — Christian Djon Myers, 22, remains in critical condition with wounds he suffered after a Sunday afternoon gunfight with IMPD officers on the city’s northside. Investigators said Myers fled from officers who attempted to arrest him for allegedly shooting at the car of his child’s mother around 3 a.m. Sunday in Broad Ripple Village. […]
INDIANAPOLIS, IN・12 HOURS AGO