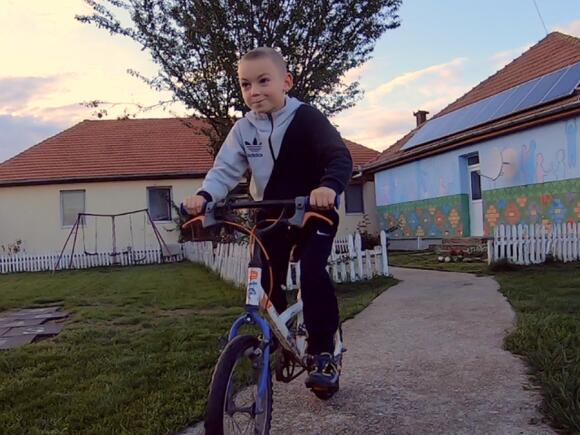 Outside of the city of Oradea, Romania, is the Village of Hope. They take in orphans, but ever since the war broke out in Ukraine, it's become a safe haven for Ukrainian refugees.

When you think of a Romanian orphanage, you probably wouldn't think of a place like this. Ridged by the Carpathian mountains, there is always the scent of a warm meal lingering in homes where parentless children are nurtured and loved.

It’s quiet and peaceful. A peacefulness that the family of seven-year-old Kiril says they are grateful for.

Kiril is from Ukraine. He and his family are refugees. He’s lived at the Village of Hope for seven months along with his mother, Tanya and 15-year-old brother Sebastian.

He's happy now, but his mother, Tanya, is worried about him and his brother after escaping their home in fear for their lives.

"In the neighboring village, there were bombs," said Tanya.

Bombs from Russia's unprovoked attack on Ukraine have led Tanya and her sons and millions of others to flee the country, leaving behind their homes and belongings.

More than 100 of those refugees came to the Village of Hope.

People like Marvin Lane are stepping up to help. He is from the Tampa Bay area and founded the Village of Hope in Romania nearly 25 years ago.

"God spoke to my heart and I decided to try and make a difference by rescuing these suffering children," said Lane.

Rescuing children like Didi, who was neglected and came to live at the orphanage as a baby.

But those challenges have become her strengths. Now she’s in college, plays soccer, and wants to become a social worker.

Now along with helping Romanian orphans, the Village of Hope is a safe haven for Ukrainians escaping the war.

"Now we’re preparing for the second wave of refugees. Winter is coming on in Ukraine and there are hundreds of thousands who have no heat," said Lane.

And thankfully, they have a pantry still filled with donations of food that poured in to help the refugees through a war that no one expected to last this long.

"A lot of people have helped and I’m so thankful," said Tanya.

But at the same time, she says it's been difficult.

"I would not like anyone of us to experience this, to leave their country and be far away in a foreign country," said Tanya.

For more information on how to help the Village of Hope through their non-profit, Generation Hope International, click here .

Igor Krasnov told Putin there were "more than 9,000 citizens who were illegally mobilized" when Russia sent conscripts into Ukraine late last year.
1 DAY AGO
Insider

The U.S. government has warned that the war in Ukraine has "raised geopolitical tensions in the Arctic"
MICHIGAN STATE・21 HOURS AGO
ABC Action News WFTS

Florida’s migrant crisis is now getting national attention. The head of Homeland Security made a stop in Miami on Monday.
MIAMI, FL・2 DAYS AGO