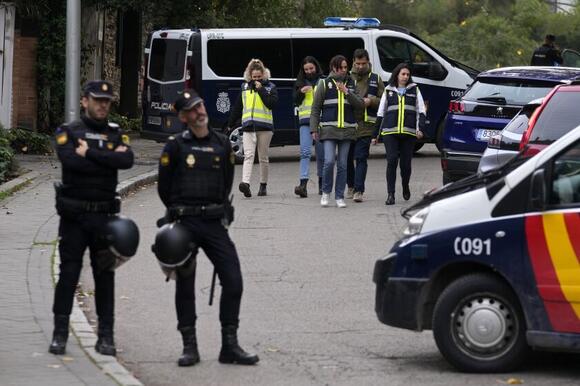 Police in Spain detonated a suspicious parcel discovered at the U.S. Embassy in Madrid, Spanish officials said Thursday, a day after a similar package sent to the Ukrainian Embassy ignited upon opening and injured an employee.

“We can confirm a suspicious package was received at the U.S. Embassy in Madrid, and are aware of reports of other packages sent to other locations throughout Spain,” the American embassy said in a response to an Associated Press inquiry.

“We are grateful to Spanish law enforcement for their assistance with this matter,” it added.

The action followed police reporting that multiple explosive parcels were sent in Spain over the past two days. Police said they were delivered to Spain’s Defense Ministry, a European Union satellite center located at the Torrejón de Ardoz air base outside Madrid and to an arms factory in northeastern Spain that makes grenades sent to Ukraine.

Spain’s interior ministry, which is charge of the country's police forces, said that the envelope intercepted at the American embassy's security screening point was “of similar characteristics as the previous ones." It was then detonated by authorities after a wide area was cordoned off by Spanish police around the embassy in the center of Spain’s capital.

Spanish authorities have yet to determine who was responsible for the letters or link them to the war in Ukraine.

The Russian Embassy in Madrid on Thursday condemned the letter bombs, saying in a tweet that “any threat or terrorist attack, especially those directed at diplomatic missions, are totally condemnable.”

The package sent to the Ukrainian Embassy was addressed to the country's ambassador to Spain, Serhii Pohoreltsev. The employee handling it was slightly injured when it burst into flames.

In an interview Wednesday following the blast, ambassador Pohoreltsev told European Pravda, a news website linked to the Ukrainska Pravda newspaper, that the explosion could have been more serious but for the professional behavior of the injured employee.

He said the parcel looked suspicious to the secretary of the ambassador because there was no return address and it did not look like a typical diplomatic post.

“The package contained a box, which caused suspicion to the commandant and he decided to take it outside – with no one in the vicinity – and open it. After opening the box and hearing a click that followed, he tossed it and then heard the explosion,” said the ambassador.

The embassy employee was treated for light wounds on his hand and later returned to work.

Spain’s National Court is investigating the incident as a terrorist act.

Kuleba added, without giving details, that “other disturbing events took place” on Wednesday, involving “the sending of very concrete threats to Ukrainian embassies.” He declined to specify the embassies in question.

An initial assessment indicated the first five packages were likely sent from within Spain, Secretary of State for Security Rafael Pérez said. Police said all but one of the letter bombs were disposed of.

Pérez said the one intact explosive device was from the air base and that it and its packaging would be part of the investigation.

Officials said that package was sent to the director of the European Union Satellite Center. The center, known as SatCen, is an EU geospatial intelligence body, and and its missions include monitoring Ukraine.

“The Spanish authorities were immediately alerted, they safely disabled the parcel and they have started their investigations,” said Nabila Massrali, EU spokesperson for Foreign Affairs and Security Policy.

“Nobody has been injured and the situation is under control."

The Defense Ministry package was addressed to Defense Minister Margarita Robles, Pérez said. Spain has contributed both military and humanitarian aid to Ukraine since the start of the Russian invasion.

Robles was visiting Ukraine on Thursday to support its defense effort with another aid bundle. Authorities did not provide details about the aid, saying they did not want to give away sensitive information to Russia's forces.

Robles said the disturbing discoveries of recent days would have no effect on Spain’s full backing of Ukraine.

“The police are investigating these packages, but let one thing be perfectly clear,” she said in Spanish. “None of these packages or any other violent act will change the clear and firm support that Spain and other NATO and EU countries have for Ukraine.”

The arms factory targeted is located in the northeastern city of Zaragoza. The parcel was addressed to the factory's director.

A government official in Zaragoza said that both the arms factory and Ukrainian Embassy packages had the same email address listed as the sender. No further details were given.

The sending of small explosive devices in postal parcels is not uncommon in many countries. They were a common occurrence for many years in Spain, especially during the most active years of the now-defunct armed Basque group ETA.

Pérez said security was increased at public buildings following the discovery of the package sent to Spain's prime minister. The move now has been extended to embassies, which already had extra security measures in place after the start of the Russian invasion of Ukraine in February.

Joseph Wilson in Barcelona, Spain, and Joanna Kozlowska in London contributed to this report.

Ukrainian president Volodymyr Zelenskyy said Russian President Vladimir Putin is losing a lot more soldiers in the war as Russia's unprecedented attacks continued in Kyiv. What Happened: Zelenskyy, in an interview with Sky News, said, "The east is losing a lot of people. They don't care about that." "We count...
1 DAY AGO
Newsweek

Vladimir Putin, who is believed to be about 5 feet 7 inches, was photographed with students of Lomonosov Moscow State University on Students' Day on Wednesday.
15 HOURS AGO
Business Insider

The wave of dismissals comes amid claims of bribery among leaders and criticism levied at two officials who took holidays in Spain and France.
3 DAYS AGO
San Diego Union-Tribune

Trump, who referred to Putin as a "genius" the week Russia invaded Ukraine, was once impeached over his dealings with Kyiv.
1 DAY AGO
Business Insider

Many expected a Russian victory over Ukraine in "a matter of days or weeks," but not US National Guardsmen, Army Gen. Daniel Hokanson said this week.
13 HOURS AGO
Newsweek

A Ukrainian officer said that Russia has been sacrificing troops in order to locate Ukrainian forces.
1 DAY AGO
San Diego Union-Tribune

Ukraine forces pull back from Donbas town after onslaught

Ukrainian forces say they have conducted an organized retreat from a town in the eastern region of the Donbas, handing the Kremlin's forces a rare but modest battlefield triumph after a series of setbacks in the invasion that began almost 11 months ago
WASHINGTON STATE・2 DAYS AGO
Safa Farooq

In 2002, a US special forces team purportedly experienced and killed a huge humanoid in Afghanistan. Named the Kandahar Monster, the monster was not just said to overshadow the warriors at 13 feet in height, but additionally had six fingers on each hand and two arrangements of teeth.
20 HOURS AGO
San Diego Union-Tribune

Europe's top human rights court has ruled that it can adjudicate cases brought by the Netherlands and Ukraine against Russia for alleged rights violations in eastern Ukraine in 2014, including the downing of Malaysia Airlines Flight MH17
2 DAYS AGO
San Diego Union-Tribune

How to fix a howitzer: US offers help line to Ukraine troops

A rapidly expanding group of U.S. and allied troops and contractors are using phones and tablets to communicate in encrypted chatrooms to provide real-time maintenance advice to Ukrainian troops on the battlefield
1 HOUR AGO
The Guardian

More than 140,000 EU citizens in UK may have wrongly received benefits

US citizen charged over alleged killing of DJ in Colombia

Colombian authorities have charged an American citizen over the alleged murder of a female DJ in Colombia whose body was discovered inside a suitcase at the bottom of a garbage container.
34 MINUTES AGO
AFP

The shocking story of a teenager beaten to death by eight young rugby players has opened old wounds and shed light on class, race and gender discrimination in Argentine society. The trial opened three weeks ago but precious little light has been shone on who did what that night.
31 MINUTES AGO
San Diego Union-Tribune

Pope discusses his health, his critics and future of papacy

A Japanese whaling operator, after struggling for years to promote its controversial products, has found a new way to cultivate clientele: whale meat vending machines
3 HOURS AGO