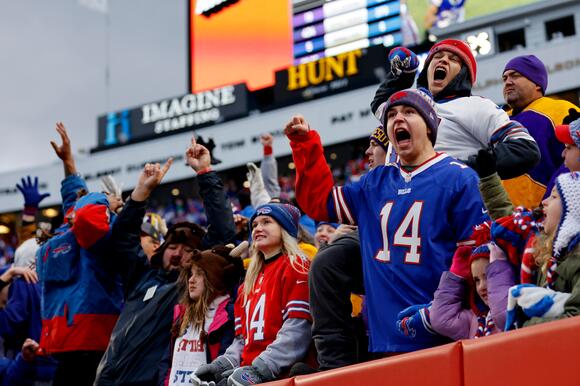 Buffalo, N.Y. (WBEN) - It has been an exciting season of Buffalo Bills football, as the team gets set for the final six games of the 2022 campaign. The Bills are in New England on Thursday night to face the Patriots at Gillette Stadium before returning to Orchard Park for a two-game homestand against the New York Jets and Miami Dolphins.

As has been the case for much of the 2022 season, ticket prices on the secondary market have been reaching significant high levels with people looking to cash in on tickets they may have to re-sell for whatever reason.

Secondary ticket sellers like VIPTIX.com say prices for upcoming Bills home games are still high for the most part, even as the temperature starts to dip lower and lower. While ticket prices are lower than in games earlier this season at Highmark Stadium, the cheapest tickets currently available for Buffalo's matchup with the Jets on Dec. 11 are just under $180 each.

However, for those selling Bills tickets at a higher cost, you may have to be ready come tax season after a recent change to tax reporting requirements come Jan. 1.

"They just passed a law in January that says if you receive more than $600 in a year from a third party vendor such as Ticketron or anything like that, where there was over $600 in sales and you benefited from it, then you're going to get a 1099-K form, which means you have to report that on your tax return," said "The Tax Lady", Esther Gulyas from EG Tax.

"Basically, these are transaction records from third-party payment networks - Pay Pal or Stubhub," added Bloomberg personal finance reporter Claire Ballentine. "In the past, you'd only receive this form, which then has to be included when you file your taxes, if you received more than $20,000 in a calendar year from a third-party network. Starting this next tax year, though, you will receive one if you receive as little as $600. So basically, that means that in the past, you could sell secondhand tickets and sort of not have to pay taxes on them, or be able to sort of skirt that a little bit. Now it's gonna be a lot harder, especially if you're selling a fair amount more than $600 worth."

This change does not matter whether you've sold a number of tickets during the season, or you had just a pair of tickets you sold at a high cost. As soon as it hits the $600 figure, then the 1099-K is going to be generated.

"We don't know exactly now whether they're gonna call it 'non-employee compensation' or just 'miscellaneous income' until it comes out. But if it's just the sale of a personal ticket, like you got the flu and you can't make it and you sold it and got $400 for it, then what happens is you don't have to pay self employment taxes on it," explained Gulyas. "You're able to reduce that cost basis, that sale price, by what you paid for it, the cost basis, and that would reduce the gain, but it's going to be taxable as miscellaneous income. If they call it non-employee compensation, that means they're looking at it as if you're self-employed. If that's the case, then you're, again, able to take the cost basis off from the game, as well as the expense that Ticketmaster or whoever might charge you. But on the bottom line, you're gonna have to be FICA, which is Social Security tax, and income taxes and State of New York taxes."

And this just doesn't apply to Bills tickets some fans may have sold. It will apply for those who sold tickets to other sporting events or concerts that were done through a third-party provider.

The most recent experience that highlighted the matter heading into the tax season in January was the sale of Taylor Swift tickets for her upcoming tour.

"Lots of drama around Ticketmaster having to cancel their general public sale because there were too many sold during the presale. Now it's all a game for the resale sites, so StubHub and Gametime are offering these seats for thousands of dollars each, some pretty outrageous prices," Ballentine said. "For those people selling those tickets, they are going to have to pay taxes on them."

And for that matter, it isn't just tickets that may generate a 1099-K when it comes time to file taxes.

"Anytime you have a third-party vendor who has given you money for the sale of anything, like if you're on one of the electronic sites (Amazon or eBay) where you're selling goods, once it hits $600, a 1099-K will be generated."

So what must those people who did sell any of those pricey tickets this year need to know when tax season arrives at the turn of the calendar year?

"I think the most important thing is to be on the lookout for that 1099-K, that's just another form you will have to submit. And also just to realize that these profits will be taxed," Ballentine said. "That could all factor into your other income and things like that, but just to keep in mind that whatever money you make off of this, you might have a little less just because of taxes."

"I think they're probably going to make it, what's called, a 'non-employee compensation'. If that's the case, then it will look like you're self-employed and you'll have to do a Schedule C [(Form 1040)]," Gulyas said. "However, because we just looked at the IRS website, if you're just selling a personal item - I got the flu, I got $400 for the tickets, I paid $300 for it - then it can be done on a Schedule D [(Form 1040)]. But because it's personal, you can't take any loss, but any gain would be taxable. If you've done a lot of it and it's considered self-employment, then you have to do a Schedule C and a Schedule SE [(Form 1040)]. In each case, you can reduce the amount of profit that you made by all the expenses you incurred - the cost to get the tickets and the commission you paid to the third-party vendor."

Meanwhile, there are a few other matters that Gulyas wants people to be aware of before they file their taxes from the 2022 year.

"I think people are going to be very surprised to find out that the $3,600 child tax credit has been eliminated, it has gone down to $2000. That's a $1,600 increase in taxes for kids that are under the age of 6 that a lot of people didn't know about. The childcare credit that was 50% has gone back to the regular rates, 20 to 30%. So there's a lot of negative things in the tax law. The earned income credit that was very favorable last year to even young people has gone back to age 24. It's still available, though, for seniors, which is a good thing for seniors. But that's just some of the things. You've still got a month to go to make sure you put as much money as you possibly can into your 401(k) plan at work, and buy those deductible Christmas gifts, like if you're self-employed, electronics that you can use it at the office."

Gulyas advises those with any other questions leading up to tax season, they can give her offices a call. There's no charge, and they'd be happy to do a last-minute tune up before Dec. 31, 2022.

Buffalo Mayor Byron Brown stood on the steps of city hall Saturday afternoon as the final touches were being put on the expansive banners being hung across the front entrance of the building.
BUFFALO, NY・15 DAYS AGO
WBEN 930AM

USS The Sullivans lists again as result of Buffalo Blizzard

The Buffalo and Erie County Military and Naval Park suffered some damage as a result of the Buffalo blizzard, which has resulted in USS The Sullivans listing once again and taking on water.
BUFFALO, NY・17 DAYS AGO
WBEN 930AM

The Erie County Stadium Corporation, a subsidiary of Empire State Empire Development Corporation, unanimously approved a general project agreement on the $1.4 billion deal for a new stadium for the Buffalo Bills
ERIE COUNTY, NY・6 DAYS AGO
WBEN 930AM

Amazon continues to make large waves in the pharmaceutical space by offering RxPass, which offers patients access to commonly prescribed generic medications to their Prime members at a cost of $5 a month.
5 DAYS AGO