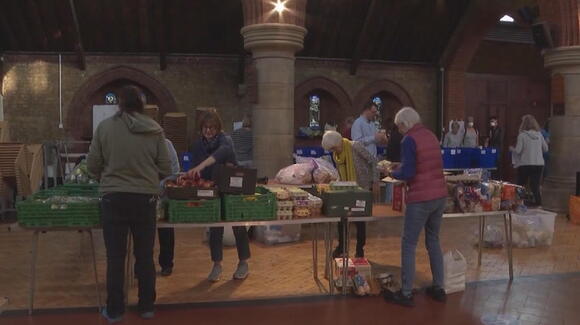 People are eating pet food and trying to heat meals using candles as a result of the cost of living crisis, a community food project manager has said.

UK inflation has reached a 41-year high , with the cost of food and non-alcoholic drinks soaring by 16.4 per cent in the year to October, in what has been the biggest rise since 1977.

Added to soaring energy bills, households are being forced to make difficult choices between heating and eating - and it is claimed some have resorted to more extreme measures.

“I’m still shocked by the fact that we have people who are eating pet food, people who are trying to heat their food on a candle or a radiator,” Mark Steed, who runs the Pantry in Cardiff’s Stowbridge area, told the BBC .

“These are shocking kind of stories that are actually the truth, we know from trusted people that have ended up sharing this in tears with us – it shouldn’t happen.”

Prices have been rising at their fastest rate in four decades, with wages in the UK set to continue to stagnate, amounting to a loss of 6.2 per cent – or an average of -£1,750 – over the next two years, according to the Trades Union Congress (TUC), the tightest contraction of any G7 economy.

There have been increasing numbers of people in public sector jobs such as teaching and healthcare forced to rely on food banks as the cost of living crisis intensifies, and mass strikes are taking place among workers in education, the NHS and the rail industry as people demand better pay.

Tens of thousands of teachers at schools in England and Wales are voting for the first time in a decade on whether to go on strike, amid claims that a significant number of primary teachers are working second jobs – in bartending and on a farm, at one school alone – just to afford essentials.

University staff also held what were billed as their largest-ever strikes this month, with nurses also set to stage their first-ever UK-wide strike in the weeks ahead, joining transport and postal workers on the picket lines.

Speaking to the BBC , Mr Seed – a community worker of 20 years experience – said: “Cardiff is a flourishing city, however there are pockets of deprivation which are simply not acceptable.

“People are not being paid enough to afford essentials, he warned, as the cost of living crisis pushes prices way up “so that everybody is squeezed or they just can’t afford it.

some of you people are heartless... this should not be happening , I pray for those people! you never know it could be our country one day .. smh

I'm glad my dad taught me how to be a prepper and live off the land before this reaches America. The great reset is happening.

That's what Democrats want. Yesterday I needed new dentures and I am old , the uncovered bill was 1800.00 and I worry about somebody's dad or mom or grand parents that just don't have it.

A man from London has described the moment he met the woman whose life he had helped save with a stem cell donation after travelling thousands of miles to see her.Callum Kennedy-Mann, a 22-year-old lifeguard from Stoke Newington, flew to Pennsylvania in the US to meet Diane Fargo at the end of 2022 after his stem cell donation had helped treat the aggressive forms of leukaemia she had been suffering with.Mr Kennedy-Mann forgot he had signed up to the stem cell register put together by Anthony Nolan – a charity helping those with blood cancer – when he was 16,...
PENNSYLVANIA STATE・2 HOURS AGO
The Independent

A customer was charged an unexpected $25 fee after they asked a restaurant server to cut a birthday cake they had bought themselves.TikTok user Gigi, who goes by @vivala_blondiiie on the app, went viral earlier this week when she posted a video of the receipt from the restaurant, which cost a subtotal of $113.She then zoomed in on the $25 charge, which read: “1 Cake Cut”“When the server asks if we want the cake WE brought cut, thinking she’s doing something nice for us…but it was 25 dollars,” Gigi wrote over the video. She captioned the clip: “I didn’t...
18 HOURS AGO
The Independent

Eating common ultra-processed foods may increase the risk of cancer, experts have found.Breakfast cereals, mass-produced bread, ready meals, ice cream, ham and crisps are among the foodstuffs that a study funded by Cancer Research UK and the World Cancer Research Fund suggests may have some link to a higher risk of various types of cancer.A team of researchers from Imperial College London which led the study said British people eat far too many ultra-processed foods – often called UPFs – and called for front-of-pack warning labels.Dr Kiara Chang, who worked on the research, said the average person in the...
1 DAY AGO
Sara B

Mark Laita, the host of the Soft White Underbelly youtube channel, is one of the first to highlight the Whittaker family. Mark first came to know the Whittaker family in 2004 while working on his book ¨Created Equal¨.
ODD, WV・23 HOURS AGO
The Independent

Voices: Your dog isn’t your ‘child’ – it’s a dangerous animal

Another day, another terrible tragedy involving a young child and a dog. The latest incident took place in Milton Keynes, where a four-year-old girl was mauled to death in a garden. Just hours before that happened, an inquest was told that 28-year-old dog-walker Natasha Johnston died of “multiple penetrating bites” to her neck. She was attacked by the eight animals in her care in Surrey on 12 January.The list keeps growing: In March last year, 17-month-old Bella-Rae Birch died after being bitten by a dog bought by her family just a week before. In April, 12-day-old baby Elon Jase...
21 HOURS AGO
The Independent

Dog owners have been warned to “stay vigilant” as new cases of a life-threatening canine disease have been recorded across Britain.Alabama rot – also known as Cutaneous and Renal Glomerular Vasculopathy (CRGV) – is a disease that impacts dogs, damaging the blood vessels in the skin and kidneys. It can cause visible sores and lead to severe organ dysfunction and kidney failure.The news comes after a Berkshire couple were left “heartbroken” after their three-year-old Labrador, Grace, passed away after contracting the disease.Her owner, Simone, told Berkshire Live: “Grace was like a daughter to us, so it isn’t easy to accept...
ALABAMA STATE・1 DAY AGO
The Independent

Six in 10 people with long Covid have had symptoms for a year, figures suggest

Around six in 10 people with long Covid in the UK are likely to have been suffering the symptoms for a year or more, figures suggest.Some 1.2 million of those with long Covid are estimated to have first tested positive for the virus at least 12 months ago.This is 61% of everyone likely to have symptoms at the start of this year, according to the Office for National Statistics (ONS).The figure is up from 57% in December and 46% in September.The latest estimates are based on self-reported long Covid from a representative sample of people in private households in the...
2 HOURS AGO
The Independent

It’s not a topic most women feel comfortable talking about. After all, who wants to admit they’ve peed in their pants?Even a tiny wet patch can cause embarrassment – and sometimes it’s because you’ve just giggled.But there are preventive measures you can apply to relieve these symptoms, with a few basic lifestyle changes to improve your bladder.“At certain times in our lives, the pelvic floor muscles may become weak for a number of reasons, including childbirth and pregnancy; decreased muscle tone with ageing; long term straining when constipated; chronic cough; obesity; underuse; and of course – menopause,” suggests Katie Knapton,...
1 HOUR AGO
The Independent

The Queen Consort has spoken of the “life-changing” effects of reading after stamping a charity’s logo into a children’s picture book destined for an overseas library.Camilla described herself as a “passionate” book lover as she toured Book Aid International’s headquarters and helped complete a shipment destined for Kigali Public Library in Rwanda.With a logo stamp in her hand, she put the mark on an inside page of The Girl Who Planted Trees by Caryl Hart, illustrated by Anastasia Suvorova, and later stamped the novel We Are All Birds of Uganda by Hafsa Zayyan.The Queen Consort visited the Library in the...
1 HOUR AGO
The Independent

The NHS is heading for another major health scandal unless care improves and patients’ concerns are heard, the government’s patient safety commissioner has warned.Dr Henriette Hughes warned health leaders and ministers that the focus on “productivity” and “financial control” rather than patient safety was getting worse.Launching her first report in her new role she said: “Unless leaders set a strategic intention to listen to patients and act, we are heading straight back to the days of Mid Staffs and other health scandals, severe harm, and death.” “My clear message to leaders is - don’t let this happen on your watch.”Have...
1 HOUR AGO
The Independent

The Bank of England’s decision to hike interest rates to a 15-year high is set to see mortgage payments rise for millions of homeowners. On Thursday, the Bank confirmed UK rates will rise for the tenth time in a row, to 4 per cent from 3.5, in a bid to control inflation after it reached a record 11.1 per cent in October.The Bank has faced a tough call over what approach to take, as higher mortgage costs saw the housing market suffer five successive months of falls in property prices. The IMF reported this week the UK would be...
1 HOUR AGO
The Independent

Households in England and Wales are to face the largest increase to their water bills in almost two decades from April, an industry body has said.Bills are expected to rise by 7.5 per cent, to an average £448 per year, according to Water UK.The body said that the increase would amount to an extra 8p per day or an average £31 more on last year’s charges.Water UK has argued that bills remained lower in real terms than they were a decade ago, and that this year’s increase reflected higher energy costs.Sign up for our newsletters. Read More Princess Kate’s Shaping Us campaign highlights importance of early childhoodWales to ‘relish’ underdog tag in Six Nations opener against Ireland, Gatland saysClare Drakeford, wife of first minister of Wales, dies
3 HOURS AGO
The Independent

Whisky by-products have proved to be good for keeping the skin healthy, new research has found.A study by a university found placing the nutrients and polyphenols from Scotland’s national drink in skincare products can help boost the skin, fight free radical damage from the environment, reduce inflammation and puffiness, and calm redness.The research was initially inspired by the beneficial effects on the skin that the sake yeast fermentation process was proven to have by a Japanese company in the 1970s.Researchers at Robert Gordon University’s (RGU) School of Pharmacy and Life Sciences in Aberdeen helped discover that pot ale, residue from...
2 HOURS AGO
The Independent

Gender neutral toilets are being installed at the UK’s busiest railway station.Network Rail said the measure will “improve inclusivity” at London Waterloo.It is part of a programme to boost toilet facilities at the station, which was used by an estimated 41 million passengers in the 12 months to the end of March 2022.We’re pleased that passengers and station users at London Waterloo station will soon be able to benefit from new and improved toilet facilities which will make their journeys a lot more pleasant and comfortableStation manager Cem DavisWork is due to start in mid-February and be completed during the...
2 HOURS AGO