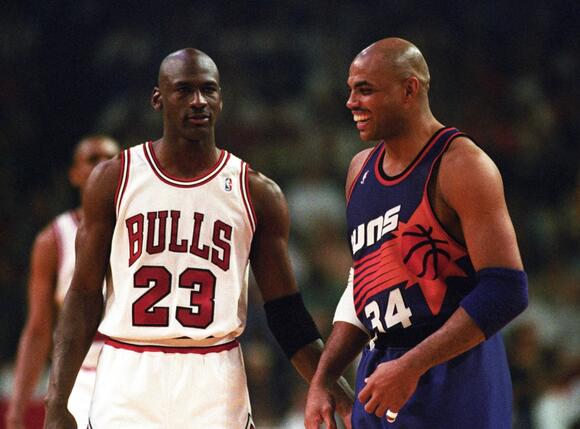 Even though they haven't spoken in a decade, Charles Barkley says he still has love for his longtime friend Michael Jordan.

A decade is a long time to not speak with someone — much less a person you once considered your best friend. However, that's the reality NBA legend Charles Barkley faces regarding his former best buddy, fellow NBA legend Michael Jordan.

Barkley recently opened up in an interview with Bleacher Report's Taylor Rooks about how he'd love to mend their relationship and move past the hurt feelings that have kept them apart for so long.

The rift began in 2012 when Barkley called Jordan out on how he was handling the then-Charlotte Bobcats, who finished that season with the league's worst record at 7-59.

"It's a really unfortunate situation for me and him. But I'm going to do my job, first and foremost, because I can't criticize other coaches and general managers and give him a pass because he's my best friend. I just can't do that," Barkley said. "What I said was, 'Michael's got to surround himself with better people. And I worry about him being successful.'"

Barkley believed that Jordan had surrounded himself with "yes men" and was doing himself a disservice by not having people around him who wouldn't be afraid to tell him when he made mistakes.

"I said that, and I had no problem saying it, because it was the truth," Charles said. "And he took offense. And he called me, and it wasn't a pleasant conversation, and we haven't spoken since then."

While Barkley certainly has a point with Charlotte making the NBA playoffs just three times in the last 10 years and never getting past the first round, he knows that Jordan has a stubborn streak in him and that both of them are quite strong-willed people.

As a result, once close friends are now at a point where they had found themselves in the same room five times but had never spoken to each other. In the end, Barkley is hopeful that one day they will reconcile their differences and reunite their friendship.

When asked by Rooks what he would say if His Airness were in front of him, Barkley answered: "I probably would say, 'What I said, I believed. I'm sorry you took offense to it. And let's get past this bulls*** and get back to playing golf and having fun.'"

The 2022-2023 football season with the Tampa Bay Buccaneers has seemingly been the most stressful, exhausting season of Tom Brady‘s life, not necessarily because of the demands of the NFL lifestyle or his age, but reportedly more so due to the “traumatizing” nature of his very public divorce from supermodel Gisele Bündchen in the midst of it all. According to ESPN reporter Jeff Darlington, who spoke about Brady’s second retirement announcement on the network’s “First Take” segment Wednesday morning, “He’s tired. I think it’s not just about the 23-year career … He’s 45 years old. It’s time to rest up.” Darlington...
TAMPA, FL・15 HOURS AGO
Bulls News

With the trade deadline looming, which players on the Bulls are most likely to be traded?
CHICAGO, IL・2 DAYS AGO
Bulls News

What is the Chicago Bulls' biggest issue that has to be addressed at the trade deadline?

The Chicago Bulls are in a precarious position as the NBA trade deadline approaches. Here's what they need to do to shore up their roster.
CHICAGO, IL・20 HOURS AGO
Bulls News

Could the Dallas Mavericks trade for Zach Lavine?

The Dallas Mavericks may be looking to make a trade for Chicago Bulls shooting guard Zach LaVine.
DALLAS, TX・1 DAY AGO
Bulls News

The Bulls have had a rough year, and it seems they can't catch a break. Find out what went wrong in their latest game.
CHICAGO, IL・20 HOURS AGO
OnlyHomers

Just days before the 2023 Super Bowl, one of the star players that is set to take the field for the game has been arrested on absolutely shocking charges. Offensive Lineman Josh Sills, who is in his rookie season for the Philadelphia Eagles, will be in court on February 16 in relation to claims that are so shocking and vile that we recommend you read for yourself here.
PHILADELPHIA, PA・1 DAY AGO
OnlyHomers

The New England Patriots are currently set up well with two young quarterbacks, Mac Jones and Bailey Zappe, who both have winning records as starting quarterbacks during their short tenure in the league.
12 HOURS AGO
Bulls News

The Chicago Bulls are in a tough spot, but don't expect any big changes at the trade deadline, according to an insider.
CHICAGO, IL・21 HOURS AGO
Bulls News

The Chicago Bulls are reportedly bewildered by the fact that Lonzo Ball is still experiencing pain in his left knee.
CHICAGO, IL・1 DAY AGO
Bulls News

Could the Bulls trade Coby White for Jae Crowder?

The Chicago Bulls may be looking to trade Coby White for Jae Crowder. Find out why and what it could mean for the team.
CHICAGO, IL・2 DAYS AGO