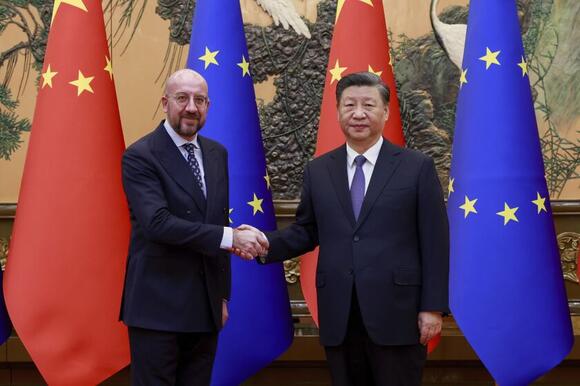 Xi was quoted as saying that “solving the Ukrainian crisis through political means is in the best interest of Europe and the common interest of all countries in Eurasia.”

“Under current conditions, we must avoid escalation and expansion of the crisis and work for peace," Xi said.

China has made such statements repeatedly in the past, while refusing to condemn Russia’s invasion and criticizing sanctions against Moscow.

Weeks before the invasion, Xi and Russian leader Vladimir Putin affirmed their “no limits" relationship, and Beijing has stepped up oil purchases from Russia while their air forces held joint drills this week.

Michel said he urged Xi to “use his influence with Russia to respect the U.N. charter" and Ukraine's sovereignty, and said they agreed that nuclear threats “are not acceptable and highly dangerous."

Michel told reporters he also raised human rights issues, including the situation in Xinjiang, where Muslim minorities have been subject to what critics say is summary detention and forced assimilation to eradicate their traditional culture. China has rejected the accusations, saying it has been waging a campaign to eliminate terrorism, radicalism and extremism and provide job skills.

“This is not about interfering in internal affairs. It is about upholding the principles agreed by the United Nations for decades," Michel said, adding that he welcomed plans to resume a China-EU human rights dialogue that has not been held for more than three years.

Michel also affirmed peaceful assembly as a fundamental right. China last weekend experienced its largest street protests in three decades as people in Beijing, Shanghai and other cities vented their anger over anti-COVID-19 lockdowns and other restrictions in place for the past three years. A police crackdown ensued and an unknown number of people were detained.

Michel referred to the protests, but it wasn't clear whether he discussed them in depth with Chinese officials.

EU officials said Michel’s one-day visit was aimed at seeking a balance between the EU’s wish for more exports to China and the need to be firm with Beijing in the defense of democracy and fundamental freedoms.

In recent years as China increased its global clout, the EU has increasingly come to see the nation as a strategic rival.

Michel's visit is also an opportunity for the 27-member bloc to show a united front after German Chancellor OIaf Scholz made a solo visit to China in early November.

During that trip, Scholz urged China to exert its influence on Russia and raised human rights concerns. Michel will try to build on those discussions as the EU seeks to stand its ground against an increasingly assertive and authoritarian China.

The visit also comes amid high tensions over self-governing Taiwan , which China has threatened to invade, and follows a United Nations report that said China’s human rights violations against Uyghurs and other ethnic groups in its Xinjiang region may amount to crimes against humanity.

Increasing numbers of politicians from the European Parliament and EU member nations have been visiting Taiwan, sparking anger in Beijing. Lithuania’s decision to upgrade relations with Taipei prompted Beijing to freeze ties and ban trade with the Baltic nation.

At the same time, Michel is seeking to improve the EU’s economic standing in the world's second largest economy, which has experienced significantly slower growth partly as a result of rigid anti-COVID-19 restrictions that also limited Michel's visit to just one day.

The EU has an annual trade deficit in goods and services with China amounting to about 230 billion euros. It specifically seeks to reduce its dependence on China for tech equipment and the raw minerals used to make items such as microchips, batteries and solar panels.

Several China experts predicted what Beijing's next move would be after their spy balloon that flew across America over several days was blown up by the U.S. military on Saturday.
TEXAS STATE・2 DAYS AGO
Newsweek

Igor Girkin predicted a "power struggle with unpredictable consequences" if Vladimir Putin died or stepped down as the Russian president.
16 HOURS AGO
Business Insider

China's Foreign Ministry said the craft was a lost civilian balloon, the same explanation it gave for a suspected spy balloon that drifted over the US.
NORTH CAROLINA STATE・17 HOURS AGO
Business Insider

"Hard power is a reality," US Army Gen. Christopher Cavoli said in January. "If the other guy shows up with a tank, you better have a tank."
1 DAY AGO
RadarOnline

Vladimir Putin’s forces are starving in Ukraine and are forced to survive on only potatoes, onions and instant noodles cooked using the back ends of rockets, RadarOnline.com has learned.In a surprising development to come as Russia’s death toll recently surpassed 500,000, one Russian soldier spoke out to reveal the Russian military’s food situation has not changed even 12 months after first invading Ukraine in February 2022.Even more shocking was recently released footage of a Russian battlefield kitchen that indicated Putin’s soldiers are struggling to survive as their options for food and nutrients are severely limited.That is the revelation shared by...
1 DAY AGO
coinchapter.com

The US Government ordered the Pentagon to destroy the alleged Chinese spy balloon. The US Air Force shot down the balloon with a single missile as it drifted over the Atlantic Ocean. China hit back at the decision, threatening a strong retaliation. YEREVAN (CoinChapter.com) — Over the last few days,...
MONTANA STATE・1 DAY AGO
Business Insider

Nicknamed Hunter, he told Rest of World that working at the Foxconn factory in Zhengzhou, China felt like he was stripped of his "rights and dignity."
3 DAYS AGO
San Diego Union-Tribune

The sheer scale of the devastation of the earthquake and its aftershocks can be seen in social media photos and videos posted by people in Turkey and Syria. Eyewitnesses have also been speaking about what happened. BBC News has been pulling together and verifying information. The tremors of the main...
1 DAY AGO
San Diego Union-Tribune

Paris mayor: No Russian team at 2024 Games if war continues

Public transportation, schools and electricity supplies have been disrupted in France as demonstrators take to the streets for a third round of nationwide strikes and protests against the government's pension reform plans
2 HOURS AGO
San Diego Union-Tribune

It wasn't me: Ex-UK PM Truss blames 'system' for her failure

British energy firm BP has reported record annual earnings amid growing calls for the U.K. government to boost taxes on companies profiting from the high price of oil and natural gas after Russia's invasion of Ukraine
6 HOURS AGO
San Diego Union-Tribune

Search teams and emergency aid from around the world are pouring into Turkey and Syria as rescuers working in freezing temperatures dig through the remains of buildings flattened by a magnitude 7.8 earthquake
1 HOUR AGO