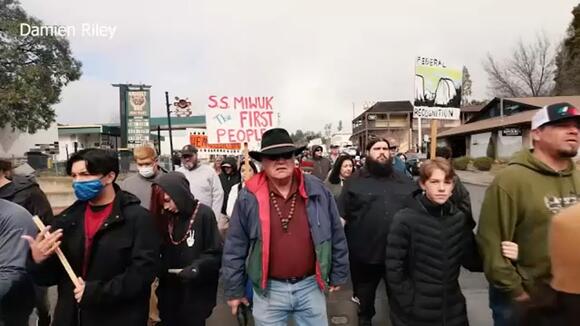 The fight to be federally recognized continues for the Southern Sierra Miwuk Nation. The tribe's history in Yosemite dates back to the 1800's, but today they operate as a non-profit. Since 1982, tribal members have been asking for acknowledgement from the Department of the Interior. Acacia Coats is the Director at large of the Southern Sierra Miwuk Nation, and she's not giving up. "It has been a horrific history for our people. So, we are definitely pushing for justice and for our elders that are still alive, for them to be able to witness that we are federally recognized would be a huge sigh of relief." Acacia explains. Earlier this year, the tribe had a march in support of their recognition. Over 300 people showed up. The tribe has over 600 members. Tara Fouch-Moore is the tribal secretary. "It's very painful, we just want to exist, we just want to teach our culture and do our ceremonies and teach our young ones and get the information from our elders before they're gone" mentions Tara. We've reached out to the U.S. Department of the Interior in the past and were told the tribe didn't meet several criteria required to become federally recognized. Since then, the Southern Sierra Miwuk Nation has received an extension to submit supporting documents by May of 2023. Kevin Spach is the Tribal Fire Case Manager. He has been standing by his wife through the tribe's journey. "It is going to benefit everyone in Mariposa County to continue to have this because if this slowly dissolves over the future because of a lack of federal recognition then it'll be a tragedy for everyone," explains Kevin. Letters of references and public comment will be open until May 10th, 2023. More details on how to support the tribe can be found on the tribe's official website here .

Monthly energy bills have become so high, they may have you doing a double take. Now, state leaders are taking steps to figure out the cause and potential solutions.
CALIFORNIA STATE・1 HOUR AGO